A divided European Union decided on Monday to lift the arms embargo on aiding rebels in Syria, although no EU member had immediate plans to send such aid to the opposition. Britain and France had argued for lifting the embargo, but other nations in the union strongly oppose sending arms shipments. British Foreign Secretary William Hague said that the EU decision “gives us the flexibility to respond in the future if the situation continues to deteriorate and worsen.” 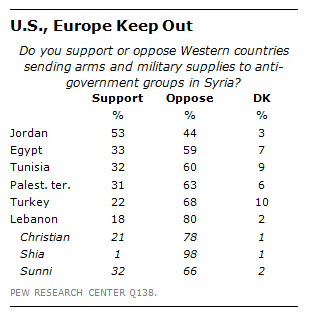 However, a Pew Research Center survey conducted in March found that five of six publics in the region were opposed to both Western and Arab governments sending arms and military supplies to anti-government groups in Syria.

The opposition to military aid from the West is particularly strong in Lebanon where 80% of the total public and 98% of Shia Lebanese do not want the West to get involved. In Jordan about half the population (53%) supports American or European military assistance for the Syrian opposition.

At the same time, there is no public support in the U.S., Western Europe or in Turkey for sending arms and military supplies to the anti-government groups in Syria. Eight-in-ten (82%) Germans oppose such assistance, as do more than two-thirds of the French (69%) and the Turks (65%) and a majority of the British (57%). Nearly two-thirds (64%) of Americans were also against arming the rebels when the survey was taken in the first two weeks of March.

In a subsequent Pew Research Center poll taken April 25-28, Americans, by a 45% to 31% margin, favor rather than oppose the U.S. and its allies taking military action against Syria if it is confirmed that Syria used chemical weapons against anti-government groups. Read more