There is broad public consensus that the budget negotiations of recent weeks can be summed up in words such as ridiculous, disgusting, stupid, and frustrating. Nationwide, 72% describe the recent negotiations in negative terms such as these; while very few offer a positive (2%), or even neutral (11%), assessment. Other frequently used terms include terrible, disappointing, childish, and joke.

The latest survey by the Pew Research Center for the People & the Press and The Washington Post, conducted July 28-31 among 1,001 adults, finds that these critical views cross partisan and ideological lines, with 75% of Republicans, 72% of Democrats and 72% of independents all volunteering similarly negative assessments. Impressions are particularly negative among Republicans and Republican-leaners who agree with the Tea Party (83% negative). 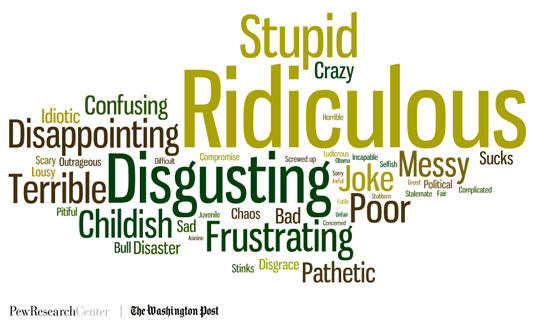 Overall, this reaction is parallel to how the public viewed the budget negotiations surrounding the possible government shutdown in early April of this year. A Pew Research/Washington Post survey conducted in the days immediately following the April 8 deal found Americans offering similarly negative reactions, and, for the most part, using the same combination of words to describe the situation.

Read the full report, including results for how the public rates the participants in the debt ceiling dispute. See also the questionnaire at pewresearch.org/politics

Economic PolicyGovernment Spending and the Deficit

Budget Negotiations in a Word
Obama Ratings Remain Rock Steady
Public Wants Changes in Entitlements, Not Changes in Benefits
Midterm Election Challenges for Both Parties
Deficit Solutions Meet With Public Skepticism
Quiz: Are you a Core Conservative? A Solid Liberal? Or somewhere in between?
What the data says about gun deaths in the U.S.
What We Know About Gen Z So Far
What the data says (and doesn’t say) about crime in the United States
Biden Nears 100-Day Mark With Strong Approval, Positive Rating for Vaccine Rollout