From liberal Democrats to Tea Party Republicans, there is broad public consensus that the budget negotiations of recent weeks can be summed up in words such as ridiculous, disgusting, stupid, and frustrating. Nationwide, 72% describe the recent negotiations in negative terms such as these; while very few offer a positive (2%), or even neutral (11%), assessment. Other frequently used terms include terrible, disappointing, childish, and joke.

The latest survey by the Pew Research Center for the People & the Press and The Washington Post, conducted July 28-31 among 1,001 adults, finds that these critical views cross partisan and 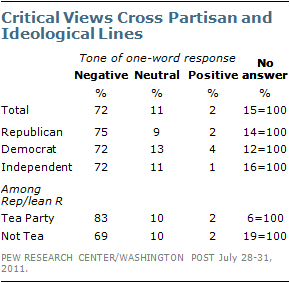 ideological lines, with 75% of Republicans, 72% of Democrats and 72% of independents all volunteering similarly negative assessments. Impressions are particularly negative among Republicans and Republican-leaners who agree with the Tea Party (83% negative).

Overall, this reaction is parallel to how the public viewed the budget negotiations surrounding the possible government shutdown in early April of this year. A Pew Research/Washington Post survey conducted in the days immediately following the April 8 deal found Americans offering similarly negative reactions, and, for the most part, using the same combination of words to describe the situation. 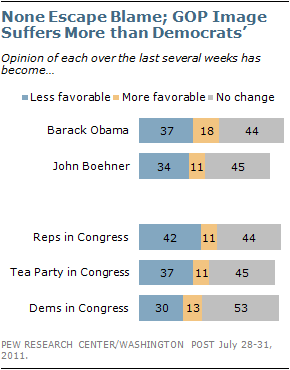 The debt ceiling debate has tarnished the image of both President Obama and Speaker Boehner – about a third say they have come to have a less favorable view of each leader in recent weeks, while relatively few say their impressions have improved. In both cases, a plurality says their opinion of these key leaders has not changed as a result of the budget negotiations. 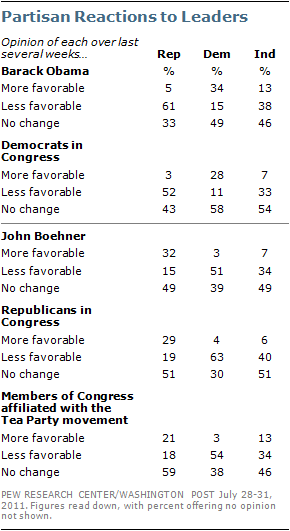 hey have a worse impression of members of Congress who are affiliated with the Tea Party movement than they previously did, compared with 11% who say they now view Tea Party members more favorably.

Tea Party Republicans express some of the strongest reactions to the political leaders in Washington. Fully 78% say their impression of Barack Obama has worsened in recent weeks, and 71% say the same about 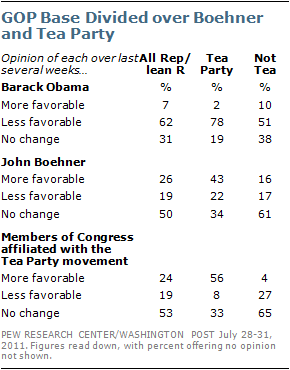 Democrats in Congress. Tea Party followers take a decidedly positive view of John Boehner’s handling of the situation – 43% say their impression of him has improved in recent weeks, compared with only 16% among Republicans and Republican leaners who do not agree with the Tea Party.

Republicans’ reactions to the Tea Party members of Congress are particularly divided. Most (56%) Republicans and Republican-leaning independents who agree with the movement say that their impression of the members of Congress affiliated with the Tea Party has improved in recent weeks. But among Republicans who either disagree or have no opinion of the movement, only 4% say they feel more positively toward Tea Party members in Congress, while 27% feel less favorably toward them than in recent weeks.