This analysis draws upon testimony on U.S. International Religious Freedom Policy: the Outlook for 2010, before the Foreign Affairs Subcommittee on International Organizations, Human Rights, and Oversight, February 3, 2010. Read the full transcript including additional global findings and methodology at pewforum.org .

As shown in the chart below, Indonesia, where President Barack Obama now plans to visit in June and where he spent part of his childhood, is among those countries of the globe where such restrictions and hostilities are highest. In the chart we’ve plotted the 25 most populous countries by their scores on both measures, with increases in social hostilities going up the chart and increases in government restrictions going to the right. If a country has both high government restrictions and high social hostilities, it will be located more toward the top right corner of the chart, as is Indonesia along with Pakistan, Indonesia, Egypt and Iran. 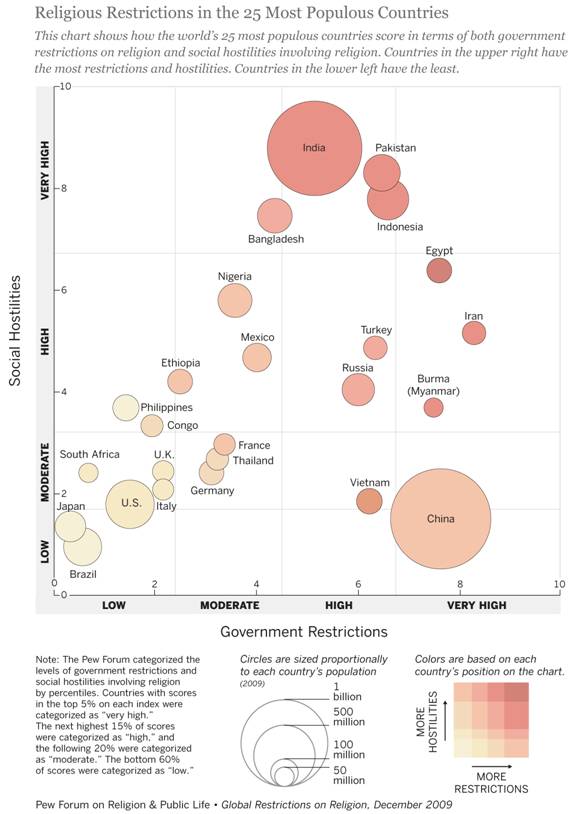 In this respect, Indonesia is not alone within its neighborhood. While the region of the world with the highest level of restrictions is the Middle East and North Africa, the Asia-Pacific region has the second highest average level of government restrictions, more than three times the average of the Americas, and more than half again as high as Europe’s average. 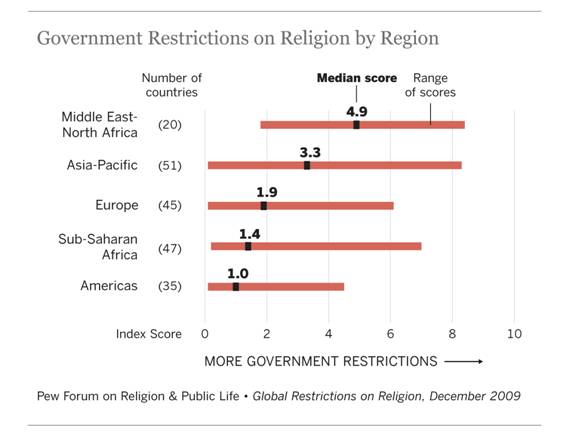 However, our study shows that in some places social hostilities may have an even greater impact than do government actions. Such is the case with Indonesia. While the study did not rank Indonesia among the countries with the most severe government restrictions on religious practice, it ranks among the 11 countries with the highest levels of social hostilities involving religion.

Looking at the 11 countries with very high levels of social hostilities involving religion, six are in Asia-Pacific (India, Pakistan, Afghanistan, Indonesia, Bangladesh and Sri Lanka) while four are in the Middle East and North Africa (Iraq, Israel, Sudan and Saudi Arabia) and one in Sub-Saharan Africa (Somalia). 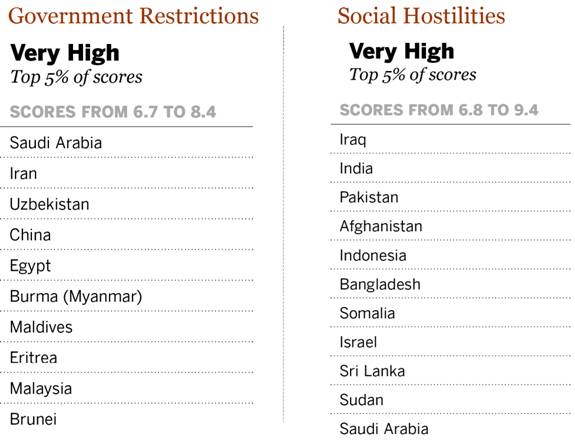 These findings are based on a series of more than 30 measures phrased as questions, such as, “Is public preaching limited by any level of government?” And on the social side, “Is there mob violence related to religion?” We answered the questions for each country by combing through two separate years of 16 widely cited and publicly available reports on international religious freedom by the U.S. State Department, the U.S. Commission on International Religious Freedom, the United Nations Special Rapporteur, the Council of the European Union, and numerous other reports by other organizations, including Human Rights Watch and the Hudson Institute.1

While government restrictions and social hostilities tend to move in tandem, there are some notable exceptions. China and Vietnam have extremely high restrictions on religion from the government but relatively fewer restrictions coming from people and groups in society. Although social tensions over religion appear to be on the rise in Chinese society, particularly in the Tibet and Xinjiang Autonomous Regions, China is on the low end of the Social Hostilities Index for the period covered by this study, which may help explain religious growth and dynamism present in China today.

On the other end of the spectrum, you can see India in the top-center part of the chart, indicating that social hostilities tend to be higher than government restrictions, though both tend to be high. Nigeria is another example of a country where there are higher social hostilities than government restrictions on religion. In the bottom left-hand corner of the chart are a cluster of countries. Only two of the 25 most populous countries are low on both measures — Japan and Brazil. The U.S. falls into the moderately restrictive category in terms of social hostilities, primarily due to frequent, religiously biased hate crimes. For instance, each year law enforcement officials report about 1,400 religiously biased hate crimes in the United States, covering nearly all 50 states. So, in sum, this scatter plot provides a way to understand the main sources of restrictions on religious groups within a given country.

It is important to remember, though, that our study is just a snapshot of a particular time period, and situations can and do change. For instance, although Malaysia was among the countries with the highest government restrictions, it had low social hostilities involving religion during the time period studied. However, had the recent social violence surrounding the dispute over whether Christians can use the word “Allah” for “God” happened during the study period, Malaysia’s social hostility score would have been higher.

This analysis draws upon testimony on U.S. International Religious Freedom Policy: the Outlook for 2010, before the Foreign Affairs Subcommittee on International Organizations, Human Rights, and Oversight, February 3, 2010. Read the full trasncript including additional global findings and methodology at pewforum.org.

1. Although it is very likely that more restrictions exist than are reported by the 16 primary sources, taken together the sources are sufficiently comprehensive to provide a good estimate of the levels of restrictions in almost all countries. The one major exception is North Korea. The sources clearly indicate that North Korea’s government is among the most repressive in the world with respect to religion as well as other civil and political liberties. (The U.S. State Department’s 2008 Report on International Religious Freedom, for example, says that “Genuine freedom of religion does not exist” in North Korea.) But because North Korean society is effectively closed to outsiders and independent observers lack regular access to the country, the sources are unable to provide the kind of specific, timely information that the Pew Forum categorized and counted in social science parlance) for this quantitative study. Therefore, the report does not include scores for North Korea.

In Western Europe, most people back church-state separation even while many willingly pay church tax