The economic status of a metropolitan area in 2014 does not necessarily signal the direction of its journey. Midland, TX, led the nation in the share of the population that was upper income in 2014 because it benefited from a boom in global oil prices. But the sharp decline in oil prices since 2014 may put the Midland economy to the test.

Meanwhile, McAllen-Edinburg-Mission, TX, an area with one of the largest lower-income tiers in 2014, is on an upswing. Thanks to economic diversification and rising trade with Mexico, the middle-class share in the McAllen area has grown in recent years. These developments could also nurture a brighter future for the McAllen economy.

This chapter discusses the changes in the economic statues of metropolitan areas from 2000 to 2014. It focuses on overall changes in the economic status of adults, that is, on whether they experienced more movement up the income ladder than down the ladder. The chapter also shows how household incomes changed in metropolitan areas from 1999 to 2014. 30 Some of the evidence is presented in tables and maps in Appendix B, and additional data are available online.

By this yardstick, U.S. metropolitan areas were roughly evenly divided between those that experienced an overall gain in economic status from 2000 to 2014 (the winners) and those that experienced an overall loss in economic status (the losers). In particular, across the 229 metropolitan areas analyzed, 119 were winners, with adults more likely to climb than to descend the income ladder, and 110 were losers. 32

There is no unifying thread that binds the biggest winners among the metropolitan areas. In Louisiana, for example, industries such as shipping and petrochemicals play large roles in New Orleans-Metairie and Baton Rouge, but information technology is more significant to the Lafayette economy. Meanwhile, Amarillo, TX, is principally a meat packing economy, while Barnstable Town, MA, is a tourist destination. 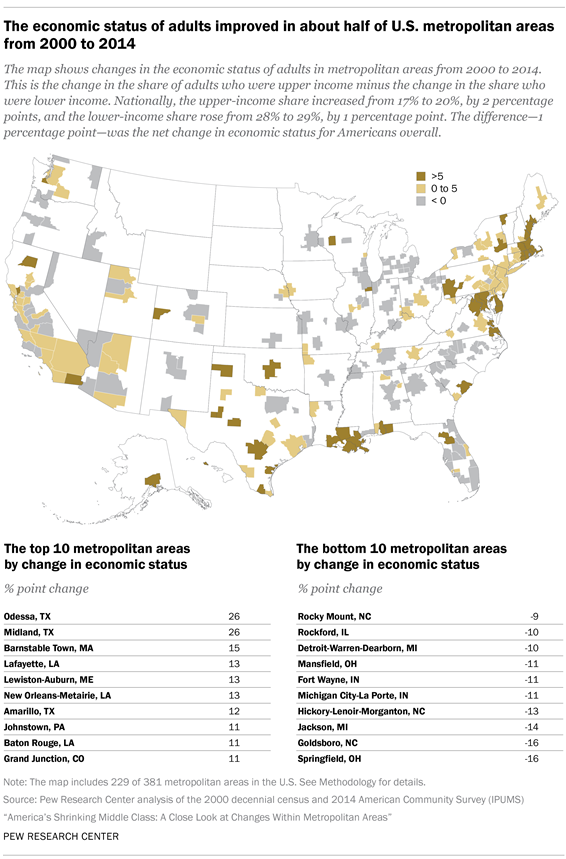 Overall, 43 metropolitan areas registered a net gain of at least 5 percentage points in the economic status of their adult populations. These areas are concentrated to the northeast and the Gulf Coast (see the accompanying map). The most prominent urban centers in this group are Washington-Arlington-Alexandria, DC-VA-MD-WV (net gain of 6 percentage points), and Boston-Cambridge-Newton, MA-NH (net gain of 7 percentage points).

The metropolitan areas that were among the biggest winners from 2000 to 2014 did not necessarily have relatively large upper-income tiers in 2014 as a result. For example, McAllen-Edinburg-Mission, TX, is one of the big winners, with a net gain of 8 percentage points. This is mainly because the share of adults who are lower-income in the McAllen area fell from 53% in 2000 to 46% in 2014. This led to an increase in the middle-class share from 39% to 45% and an increase in the upper-income share from 8% to 9%. But while the McAllen area retained one of the largest lower-income tiers in the country in 2014 and a smaller-than-average middle-class share, its economy appears to have improved significantly in recent years.

The second tier of winners—those with a net gain of up to 5 percentage points from 2000 to 2014—encompasses 76 metropolitan areas. These areas are generally dispersed across the country, although they appear more sparsely in the Rust Belt and in states due south. The two largest metropolitan areas in the country—New York-Newark-Jersey City, NY-NJ-PA, and Los Angeles-Long Beach-Anaheim, CA—are in this group.

The economies in the 10 metropolitan areas with the greatest losses in income status from 2000 to 2014 shared a greater-than-average reliance on manufacturing. Many of these areas are in the Rust Belt, including Springfield, OH, which, along with Goldsboro, NC, experienced the greatest loss in the country with a decrease of 16 percentage points.. The share of adults in the lower-income tier rose from 21% in 2000 to 32% in 2014 in Springfield, and the share in the upper-income tier fell from 18% to 13%.

The 10 areas that slipped the most in economic status are also generally struggling to recover jobs that were lost with the recessions this century. From 2000 to 2014, job losses in manufacturing in these areas ranged from 23% in Fort Wayne, IN, to 51% in Hickory-Lenoir-Morganton, NC, compared with 29% nationally. Other sectors did not entirely pick up the slack as overall private sector employment also fell, ranging from 3% in Goldsboro, NC, to 25% in Hickory-Lenoir-Morganton, NC. By comparison, private sector employment in the U.S. overall increased 5% from 2000 to 2014.

While the economic trajectory pointed down in 110 metropolitan areas, these are not necessarily areas with large shares of adults in the lower rungs of the income distribution. The majority of adults in most of these areas were in the middle class in 2014, including in predominantly middle-class communities such as Wausau, WI; Janesville-Beloit, WI; and Elkhart-Goshen, IN. Some other areas, such as Minneapolis-St. Paul-Bloomington, MN-WI, and Raleigh, NC, had larger-than-average upper-income tiers in 2014.

Changes in the shares of adults in lower-, middle- and upper-income tiers from 2000 to 2014

Incomes of households in all income tiers decreased around the country 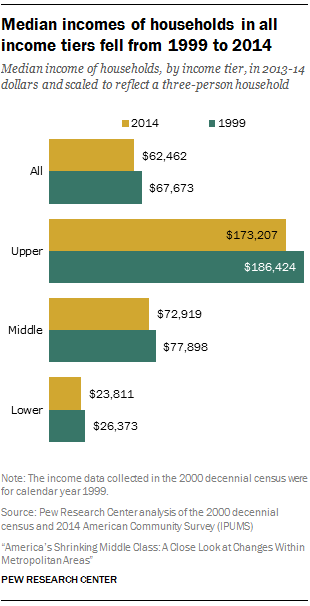 The redistribution of adults across the three economic tiers is one way to look at the change in the economic status of a metropolitan area from 2000 to 2014. But what about the fortunes of middle-class households, or the finances of households in the lower- and upper-income tiers in an area? Did they improve or worsen in the recent past? As it turns out, households in all income tiers were financially worse off in 2014 than in 1999 in the vast majority of metropolitan areas.

The financial setback for households was a shared experience across virtually all metropolitan areas. The overall median income fell in 190 of 229 areas from 1999 to 2014. The greatest loss was in Springfield, OH, where the median household income plunged 27%, from $73,895 in 1999 to $53,957 in 2014. (Data on median incomes in all 229 areas, by income tier, are available online in a set of supplementary tables.)

What transpired in Springfield was not an isolated development. Seven other communities sustained losses of at least 20%. Four of these areas were in North Carolina: Goldsboro, Rocky Mount, Burlington and Hickory-Lenoir-Morganton. 35

More generally, double-digit losses in median incomes (10% or more from 1999 to 2014) prevailed in 95 metropolitan areas. As seen in the following map, these metropolitan areas are to be found around the country, with the exception of the northeastern coast. The most populated metropolitan areas in this group are Chicago-Naperville-Elgin, IL-IN-WI; Miami-Fort Lauderdale-West Palm Beach, FL; and Atlanta-Sandy Springs-Roswell, GA.

Additionally, median incomes fell by up to 10% in 95 other metropolitan areas. The New York and Los Angeles areas belong to this group of metropolitan areas. Many of the country’s largest metropolitan areas fall into this category too, including Dallas-Fort Worth-Arlington, TX; Houston-The Woodlands-Sugar Land, TX; Philadelphia-Camden-Wilmington, PA-NJ-DE-MD; San Francisco-Oakland-Hayward, CA; Phoenix-Mesa-Scottsdale, AZ; and Riverside-San Bernardino-Ontario, CA.

A small group of metropolitan areas, 39 in all, experienced an increase in median household income from 1999 to 2014. Midland, TX, in which the median income increased by 37%, stands out in this select group of localities. Household incomes rose by more than 20% in only one other area—Odessa, TX. There are only 10 areas in which the median household income increased by more than 5% from 1999 to 2014. The two largest metropolitan areas to experience rising incomes in this period are Washington-Arlington-Alexandria, DC-VA-MD-WV, and Boston-Cambridge-Newton, MA-NH. 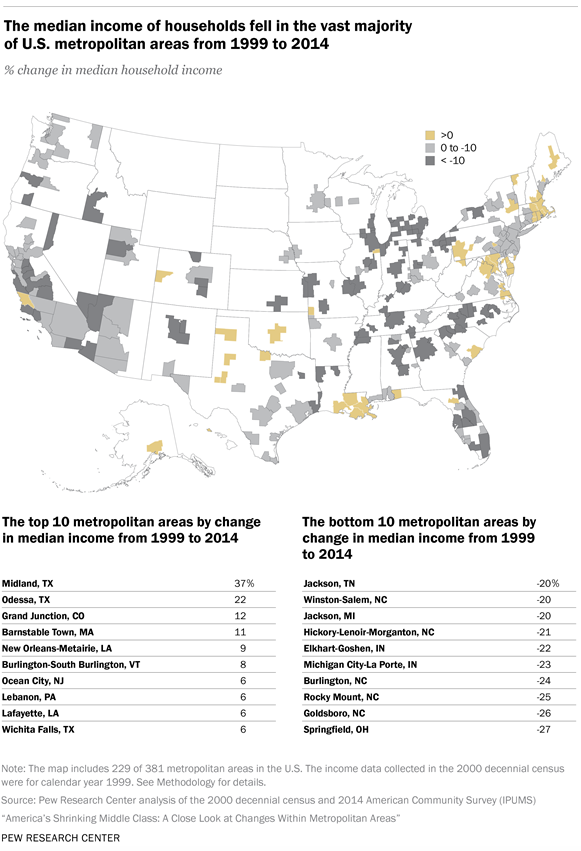 Changes in the incomes of middle-class households

Middle-class households across the country experienced a financial shock from 1999 to 2014 as their median income decreased in 222 of the 229 metropolitan areas examined.

Other largely middle-class localities that experienced significant losses in income include Janesville-Beloit and Eau Claire in Wisconsin and Elkhart-Goshen in Indiana. The middle class in these areas experienced at least a 10% decrease in median income from 1999 to 2014. Thus, while these communities retained their middle-class character in 2014, the financial security of middle-class households in them has deteriorated relatively sharply since 1999.

The middle class gained financially in only seven metropolitan areas. Midland, TX, was one of the areas in this spare group, but only because the median middle-class households there continued to earn about $77,000 in 2014, just as it did in 1999. The largest gain in income for the middle class was in Grand Junction, CO, where the median increased from $72,152 in 1999 to $75,949, or by 5%.

Changes in the incomes of households in the upper-income tier

For the upper-income tier, losses in the order of 5% to 10% were most common, prevailing in 114 metropolitan areas. Several areas with relatively large upper-income tiers in 2014 belong to this group, including Barnstable Town, MA; Boston-Cambridge-Newton, MA-NH; Bridgeport-Stamford-Norwalk, CT; Norwich-New London, CT; and San Francisco-Oakland-Hayward, CA. In addition, the incomes of upper-income households fell by up to 5% in 47 areas.

Changes in the incomes of households in the lower-income tier

Akin to the experience of the middle class, the median income of households in the lower-income tier decreased in 221 of the 229 metropolitan areas examined. But lower-income households took more of a financial blow from 1999 to 2014.

Changes in income and income inequality are related to changes in the shares of adults in lower-, middle- and upper-income tiers 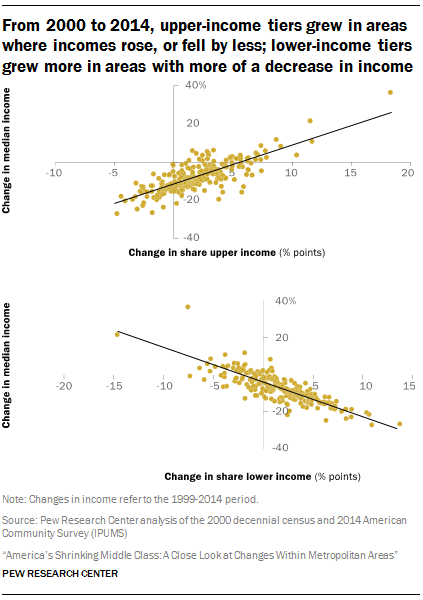 The shares of adults in lower-income households increased in most U.S. metropolitan areas from 2000 to 2014. How much this share increased is related to how much the median income in an area decreased—the more steeply incomes fell, the more the lower-income share increased. Similarly, areas with higher growth in median incomes, or less of a decrease, were more likely to experience an increase in the share of adults in the upper-income tier.

The general relationships between the change in median incomes in metropolitan areas and the change in the shares of adults in lower- and upper-income tiers are depicted in the accompanying scatter plots. The relationships are evidently strong and as described. 38 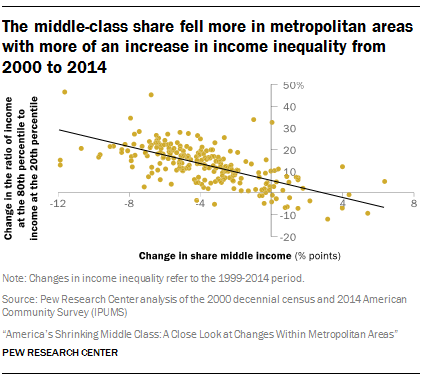 Calculator: Are You in the American Middle Class?