The share of the American adult population that lives in middle-income households has fallen since 2000. The trend this century is the continuation of a long-running decline. An earlier analysis by the Pew Research Center, which looked at the period from 1971 to 2015, demonstrated that the middle class in the U.S. has been shrinking steadily for more than four decades. 18

Nationally, the movement out of the middle from 2000 to 2014 has been accompanied by rising shares of adults in both upper-income and lower-income tiers. Notably, however, when looked at as a whole, the share of Americans who are upper income increased more than the share that are lower income. But, as shown in later chapters, this is not a pattern that describes the experience of all metropolitan areas—in almost half the areas examined, there has been more movement down the ladder than up.

These findings emerge from a new Pew Research Center analysis of data from the 2000 decennial census and the 2014 American Community Survey (ACS), both conducted by the U.S. Census Bureau. 19 Adults are classified as lower, middle or upper income based on their household income adjusted for the number of people in their household. Additionally, incomes are adjusted for the cost of living in a metropolitan area relative to the country overall. The analysis covers 229 of 381 metropolitan areas in the U.S. accounting for 76% of the national population in 2014.

With the recession, the value of a ‘middle-class income’ diminished from 1999 to 2014 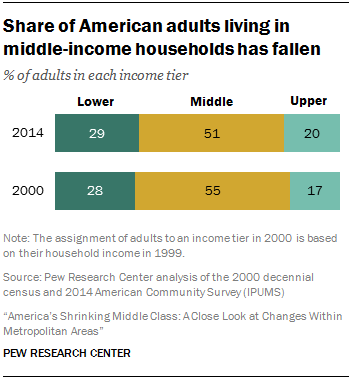 The shrinking in the middle is more pronounced over the long haul. As previously reported by Pew Research, the middle-income share decreased from 61% in 1971 to 50% in 2015. Over this nearly 45-year period, the share of the upper-income tier rose from 14% to 21%, and the share in the lower-income tier increased from 25% to 29%. 22

Adjusting incomes for the cost of living in a metropolitan area

The national middle-income standard defined previously—$41,641 to $124,924 for a three-person household in 2014—is also used to determine the economic status of households in all metropolitan areas. However, because the prices of goods and services in a metropolitan area are typically different from the prices nationally, it is necessary to adjust household incomes in each area for that difference in the cost of living. By this process, the incomes of households in relatively expensive areas are adjusted downward and the incomes of households in relatively cheaper areas are adjusted upward.

In this report, the metropolitan area cost-of-living adjustment is based on price indexes published by the U.S. Bureau of Economic Analysis (BEA). These indexes, known as Regional Price Parities, compare the prices of goods and services in a metropolitan area with the national average prices for the same goods and services. The latest available estimates for these indexes are for 2013 (details on Regional Price Parities are available at http://www.bea.gov/regional/index.htm).

Since Jackson is relatively inexpensive, households in that area need to receive an income of only about $34,600, or 17% less than the national standard of $41,641, to be considered a part of the American middle class. But a household in Urban Honolulu needs an income of about $51,000, or 22.5% more than the U.S. norm, to be considered middle class.

Next: 2. The relative size of income tiers and their financial status varied greatly across U.S. metropolitan areas in 2014
← Prev Page
Page1You are reading page2Page3Page4Page5Page6Page7Page8
Next Page →

Calculator: Are You in the American Middle Class?

America’s Shrinking Middle Class: A Close Look at Changes Within Metropolitan Areas
1. The American middle class loses ground nationally
With the recession, the value of a ‘middle-class income’ diminished from 1999 to 2014A smaller share of adults are middle income
2. The relative size of income tiers and their financial status varied greatly across U.S. metropolitan areas in 2014 3. The middle class shrank and incomes fell in most metropolitan areas from 2000 to 2014 Acknowledgments Methodology Appendix A: References Appendix B: Detailed tables and maps