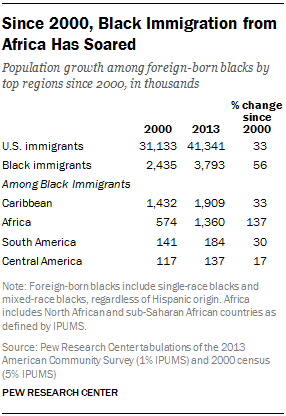 Besides population size, some characteristics of the black immigrant population have changed since 2000. 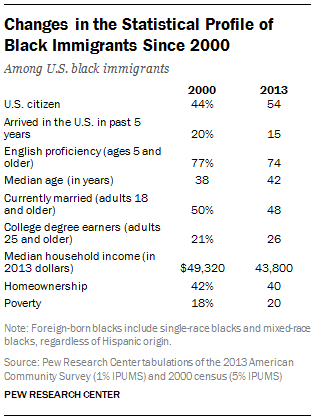 Compared with 2000, black immigrants ages 25 and older today are more likely to have a bachelor’s or advanced degree; the share has grown from 21% then to 26% in 2013. The share with a bachelor’s degree or more grew 5 percentage points for black immigrants from South America, from 20% in 2000 to 25% in 2013. The share of black Caribbean immigrants with a college degree also increased over the period, from 16% to 20%. Black African immigrants were the only group whose educational attainment declined, falling slightly from 38% to 35%, in the share with a college degree during this time.

But there were some areas with little change. Half of foreign-born black adults in 2000 were married; today that share is only 2 percentage points lower, 48%. Additionally, the percentage of foreign-born blacks who are homeowners (42%) is about the same as it was in 2000. The share of black immigrants living below the poverty line has risen slightly since 2000, from 18% in 2000 to 20% in 2013. These changes varied little by region of birth.

Next: Appendix A: Additional Tables
← Prev Page
Page1Page2You are reading page3Page4Page5
Next Page →