Black immigrants are a diverse group with notable differences in demographic, economic and geographic characteristics, often tied to the regions of their birth countries. Black immigrants are also notably different from other Americans. For example, immigrant blacks are more likely than U.S.-born blacks to have a college degree or to be married. Compared with all U.S. immigrants, immigrant blacks are more likely to hold U.S. citizenship and to speak English proficiently. 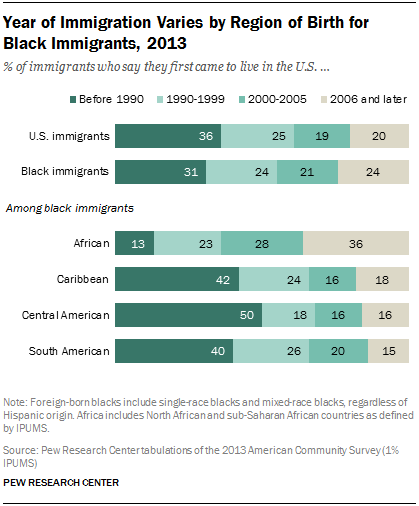 Among black immigrants from Central America, half arrived before 1990, the largest share of any regional group. For example, nearly half (47%) of all black Central American immigrants are Panamanian or Belizean. Panama, in particular, saw large waves in the 1980s due to the Panama Canal Act, which granted admission to Panamanians who worked on the canal, while others fled because of the Manuel Noriega regime.10 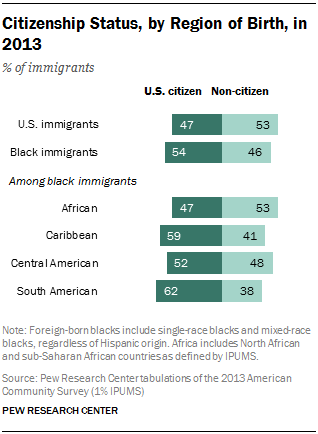 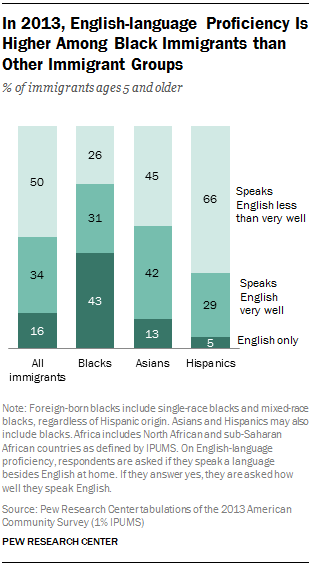 A greater share of foreign-born blacks is proficient in English than the overall U.S. immigrant population, according to the Pew Research analysis of the 2013 American Community Survey. Nearly three-quarters (74%) of black immigrants, ages 5 and over, are proficient English speakers. Some 43% speak only English at home, while an additional 31% say they speak a language other than English at home but report that they speak English “very well.” 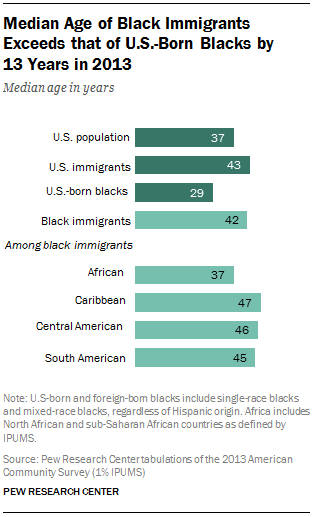 The U.S. black immigrant population is overwhelmingly made up of adults, reflecting the adult age of migration for most immigrants. About nine-in-ten (93%) black immigrants are 18 or older. Foreign-born blacks are also older than Americans overall. Their median age is 42 years, compared with 37 for the overall U.S. population. But the median age of black immigrants is similar to that for all U.S. immigrants (43 years). 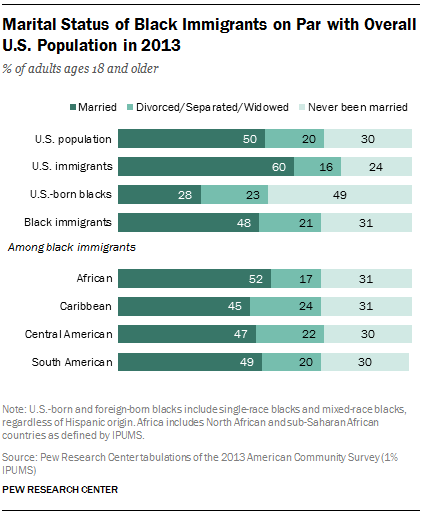 There are only small differences in marriage rates within the foreign-born black adult population. Overall, 52% of African black immigrant adults are married which is the highest share among black immigrant origin groups. 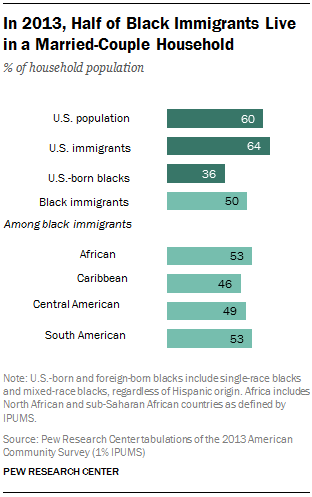 However, the Pew Research analysis shows that U.S.-born blacks are less likely to live in a married couple household—just 36% do so—than black immigrants. They are also more likely than foreign-born blacks to live in a female-headed household (41% versus 24%).

Among foreign-born blacks, 53% of Africans and 53% of South Americans live in married couple households. Among Central American black immigrants, that share is 49%, while it is 46% of black immigrants from the Caribbean. 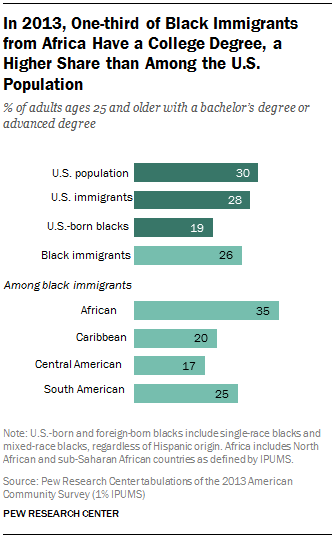 About a quarter (26%) of black immigrants ages 25 and older have a bachelor’s degree or higher. This share is below that of the overall U.S. population, in which 30% of U.S. adults 25 and older have at least a bachelor’s degree. However, the share with an advanced degree, such as a master’s degree, Ph.D. or a professional degree, is similar among all Americans (11%) and black immigrants (10%).

By comparison, U.S.-born blacks ages 25 and older are less likely to have at least a bachelor’s degree than black immigrants—19% compared with 26%. 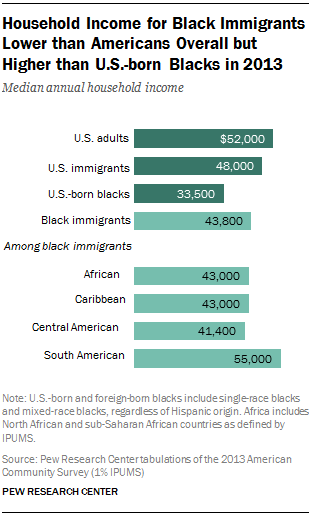 Although black immigrants have similar levels of educational attainment as Americans overall, their household incomes are lower than the median U.S. household. The median annual household income for foreign-born blacks in 2013 was $43,800. That’s roughly $8,000 less than the $52,000 median for American households. 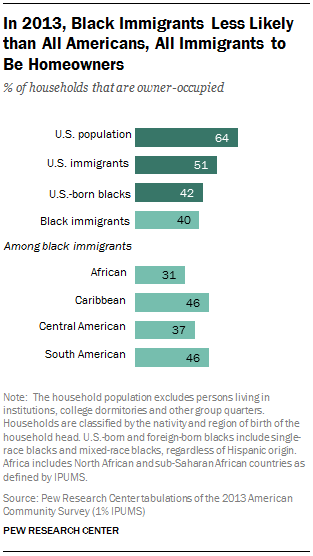 Homeownership rates vary little between U.S.-born and foreign-born blacks. Some 42% of U.S.-born blacks are homeowners compared with 40% of black immigrants. 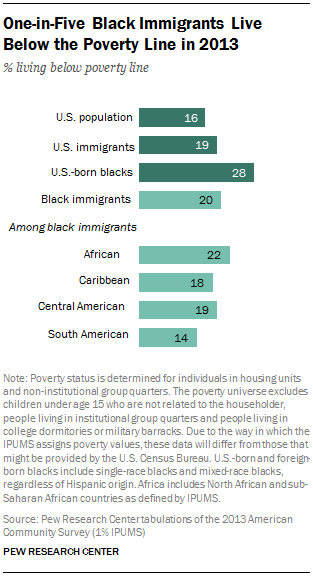 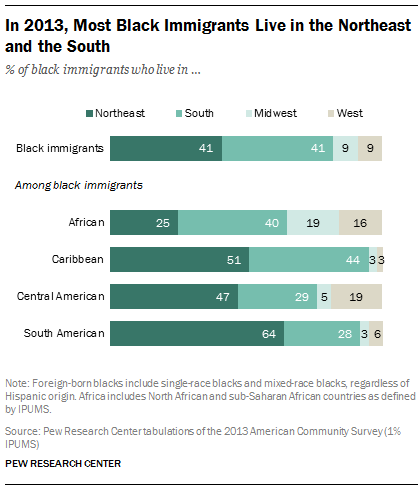 Black immigrants from the Caribbean are more concentrated in the Northeast and the South—95% live there—than the overall black immigrant population.

Looking at the top states of residence for the nation’s black immigrants, one-in-four (24%), or 910,000, live in New York state alone. Florida has the second-largest foreign-born black population with 661,000, followed by New Jersey, Maryland and Massachusetts. 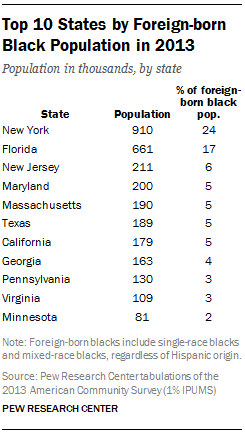 Among metropolitan areas, the New York-Newark-Jersey City metropolitan area has by far the largest black immigrant population, containing 27% of the foreign-born black population overall. The Miami-Fort Lauderdale-West Palm Beach metro area in Florida is the second largest with 12%, followed by Washington, D.C.-Arlington-Alexandria, Virginia at 6%. The Boston and Atlanta areas each account for 4% of the total black immigrant population.

Some black immigrant country of origin communities are clustered around particular metropolitan areas. For example, the New York metro area is home to roughly 250,000 black Jamaican immigrants, or nearly 40% of all foreign-born black Jamaicans in the U.S. And the Miami metropolitan area has the nation’s largest black Haitian immigrant community—more than 211,000 black Haitian immigrants, equal to 36% of its population in the U.S. 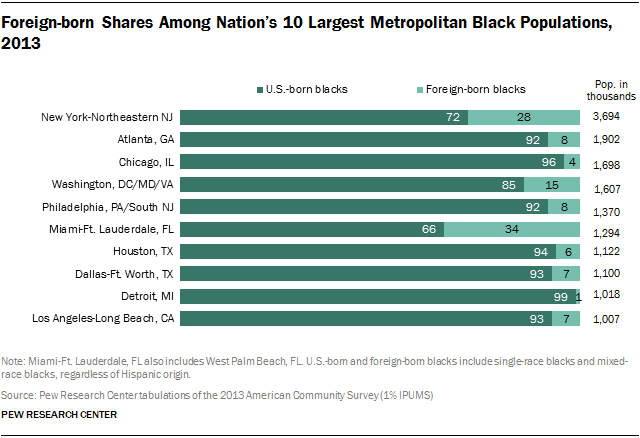 Next: Chapter 2: Changes in the Black Immigration Population Since 2000
← Prev Page
Page1You are reading page2Page3Page4Page5
Next Page →

ImmigrationImmigration TrendsAfrican Americans
Defining generations: Where Millennials end and Generation Z begins
Growing Share of Americans Say They Plan To Get a COVID-19 Vaccine – or Already Have
Quiz: Are you a Core Conservative? A Solid Liberal? Or somewhere in between?
Most Americans Support Tough Stance Toward China on Human Rights, Economic Issues
In their own words: What Americans think about China