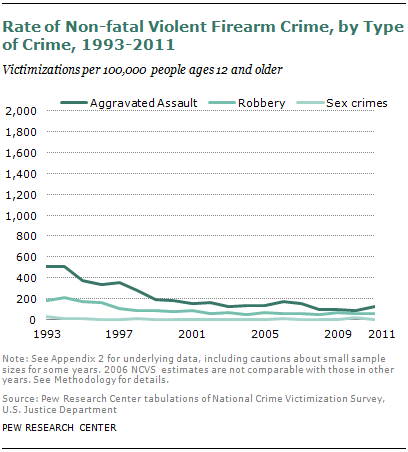 Over the past two decades, the rate of non-fatal violent firearm crime victimizations among Americans ages 12 and older was highest in the early 1990s, and fell sharply (63%) from 1993 through 2000, according to analyses of data from the National Crime Victimization Survey. From 2000 to 2011, the rate declined 33%.

The rate for both gun crimes displayed the same general pattern of large declines in the 1990s. From 2000 to 2011, rates for aggravated assault declined overall. There was no clear trend for robbery with a firearm from 2000 to 2011. 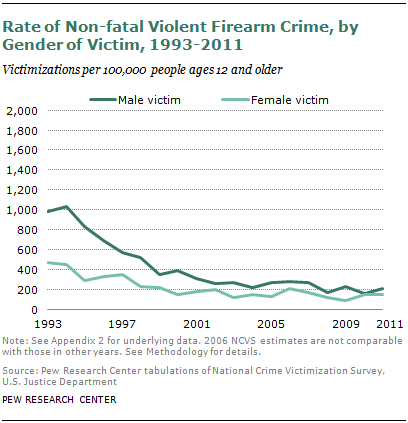 As with firearm homicide, males account for most victimizations by non-fatal violent firearm crime.11 However, men and boys are not as large a share of non-fatal firearm crime victims as they were two decades ago.

Violent victimization rates involving firearms declined for both males and females from 1993 to 2011, with fluctuations in some years.

Girls and women made up 51% of the U.S. population ages 12 and older in 2011 but were 44% of the victims of non-fatal violent firearm crime in that age group. 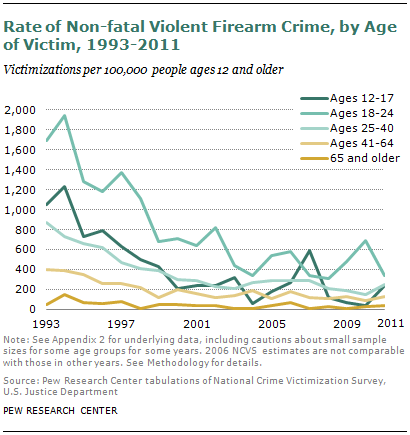 As with gun homicides, young adults are at higher risk than older adults of being the victim of a non-fatal gun crime.

Two decades ago, young adults ages 18 to 24 were more likely than any other age group (among the population ages 12 and older in the victimization survey) to be a victim of non-fatal firearm crime. But the victimization rate of 18- to 24-year-olds declined 80% from 1993 to 2011, compared with the 75% overall decline in non-fatal firearm victimization during those years. By 2011, the rate for this age group was only higher than rates for adults ages 41 and older, but not statistically different from the rate for 12- to 17-year-olds or 25- to 40-year-olds. 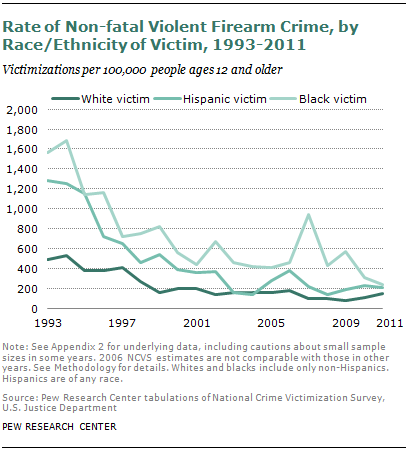 In 2011, the white rate of non-fatal gun crime victimization appears to be somewhat lower than those of Hispanics and blacks, although the differences are not statistically significant. (Those rates were 158.7 victimizations per 100,000 people ages 12 and older for whites, 215.0 for Hispanics and 245.5 for blacks.)

The non-fatal firearm crime victimization rates of Hispanic and black Americans ages 12 and older fell somewhat more sharply than the white rate from 1993 to 2011: by 83% for Hispanics and 84% for blacks, compared with 68% for whites. The Hispanic population ages 12 and older has more than doubled in size since then, so its rate is a larger factor than in the past in driving the overall rate. (The black population grew 24% in that time, and the white population grew 7%).