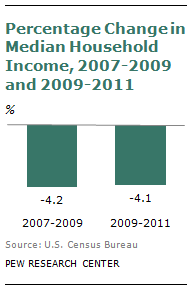 The current “recovery” is also the most negative for household income during any post-recession period in the past four decades. However, the failure of household incomes to regain ground two years into an economic recovery is not without precedent. U.S. households also experienced lingering losses during the recoveries from the 1990-91 and 2001 recessions—median household income fell by 1.3% in the first two years following the end of each of those two recessions. But those losses were less than half as great as the decrease of 4.1% in the first two years of the current economic recovery. 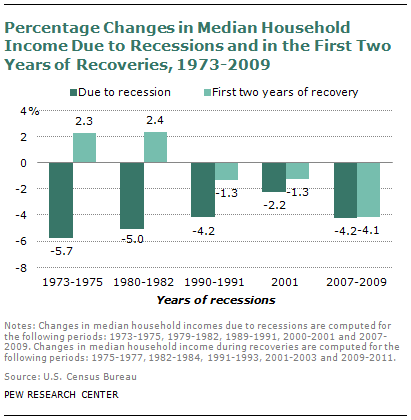 More than a Decade of Losses in Household Income 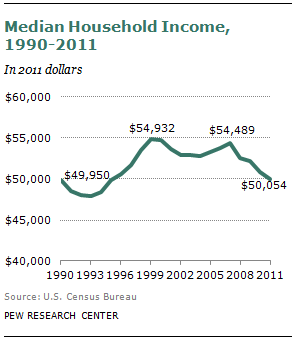 The continuing decline in household income means that 12 years have now passed without the median exceeding a previous peak. Estimates of household income from the Census Bureau are available starting from 1967. The highest level recorded for median household income since that year is $54,932 in 1999 (inflation adjusted to 2011 dollars). That was the end result of a record-long economic expansion in the 1990s.

Other Indicators of the Wellbeing of U.S. Households

The lackluster results on household income are symptomatic of broader struggles in the economic well-being of U.S. households. As noted in the latest Census Bureau report, the poverty rate has also risen in the two years since the end of the Great Recession, from 14.3% in 2009 to 15.0% in 2011. The rate in 2007 was 12.5%.

Another financial burden on households is the nosedive in their wealth (value of assets owned minus outstanding value of debt) due to the recession. The latest available estimates from the Board of Governors of the Federal Reserve System show that median household wealth fell from $131,016 in 2007 to $79,431 in 2010, a loss of 39%.5

The malaise in income, poverty and wealth in part reflects the weak performance of the U.S. labor market. The share of families with at least one unemployed member nearly doubled during the Great Recession and remains at a high level. In 2007, 6.3% of the nation’s families had at least one unemployed member. That share jumped to 12.0% in 2009 and declined modestly to 11.5% in 2011.6

Overall, on the basis of some indicators, such as income and poverty, the economic health of American families deteriorated further in the first two years of the recovery from the Great Recession. Other indicators, such as unemployment, showed minimal improvement, if any. Much like an unwelcome dinner guest who does not know when it is time to leave, the Great Recession seems blissfully unaware that it was declared over in June 2009.