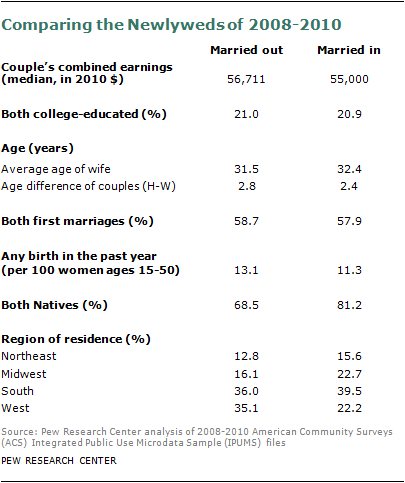 Except for a few areas, newlywed intermarried couples are not that different from newlyweds who married within their own racial or ethnic group, measured by a series of demographic and economic characteristics.

However in many ways these two groups are not that different: Couples in a mixed union have somewhat higher combined earnings than those who are from the same racial or ethnic group ($56,711 vs. $55,000). Newlyweds in mixed couples are equally likely as those in non-mixed couples to be both college educated.

Age of the spouses in the two types of unions is similar, and the age difference between husband and wife is only slightly bigger in mixed couples than for couples of same race and ethnicity (2.8 years vs. 2.4), 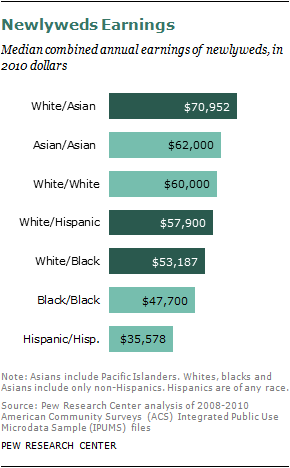 When looking at detailed combinations of newlywed couples by race and ethnicity, sharper differences emerge.

Earnings: White-Asian intermarried couples have higher earnings than both same-race white and Asian couples. Among seven pairs of newlyweds who are either of same race or intermarried with whites, the white/Asian newlywed couples have the highest combined (median) annual earnings of nearly $71,000, followed by couples whose husband and wife are both Asian ($62,000), and those whose husband and wife are both white ($60,000).

The earning differences of couples reflect the general pattern of income disparity among families of different racial and ethnic background in the U.S. In 2009, the median family income was $75,027 for Asians, $62,545 for whites, $39,730 for Hispanics, and $38,409 for black families.10 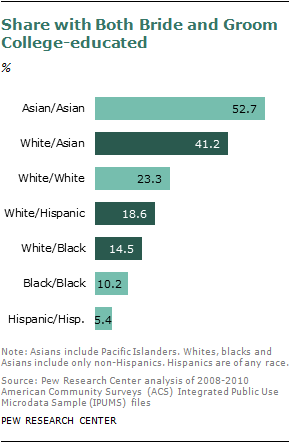 College Education: Higher education is often associated with higher income, although it is not exactly true for couples whose husband and wife are both Asian. More than half of Asian newly married couples (53%) are college-educated (including both husband and wife). In contrast, about four-in-ten white/Asian newlyweds (41%) are college-educated. Yet, Asian couples have less combined earnings than white/Asian intermarried couples.11 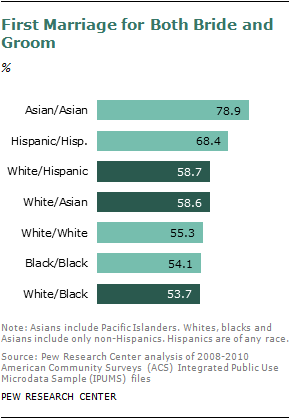 First Marriage: For more than four-in-ten (42%) newlyweds who got married in 2008-2010, it was not the first marriage for either one or both spouses. First-time newlyweds (for both bride and groom) made up about 58% of all newly married couples in that period. About one-in-five (20.5%) new marriages were for couples of whom both the bride and the groom had been married before, and the rest involved one who had been married before, one not.

The vast majority of Asian and Hispanic couples who “married in” are first-time newlyweds (79% and 68%). The share among intermarried white/Hispanic couples as well as white/Asian couples is lower, about six-in-ten (59%).

First-time marriage rates among whites who married in are slightly lower (55%), and a similar share of black and intermarried white/black couples wed for the first time (about 54%). 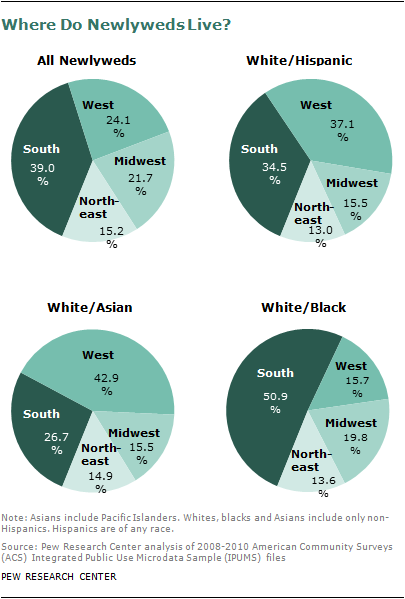 There are some regional patterns about where different intermarried couples live, and the differences are more significant in the South and the West. Compared with all newlyweds, white-Hispanic and white-Asian newlyweds are more likely to live in the Western states (37% and 43%, respectively). Yet intermarried white/black newlyweds are more likely to call the Southern states home: Over half of the white/back couples live in the South, while only about one-in-six (16%) of them live in Western states.

The geographic distribution of intermarried couples is generally in line with where the minority groups are concentrated. According to the same data source of 2008 to 2010 American Community Survey, nearly six-in-ten adult African Americans (57%) live in the South, while almost half of Asian Americans (48%) and four-in-ten Hispanics (41%) live in Western states.

The intermarriage rate in the Unites States tilts West as well, judging by the share of intermarried newlyweds out of all newlyweds. About one-in-five (22%) of all newlyweds in the Western states between 2008 and 2010 married someone of a different race or ethnicity, compared with 14% in the South, 13% in the Northeast, and 11% in the Midwest.

The highest rates of newlywed white/Asian couples are in Hawaii (9%), the District of Columbia (7%) and Nevada (5%). And the top three states for white/black intermarried couples are Virginia, North Carolina and Kansas, which all have rates of about 3%.

For more details about the state and region level information of newlyweds, see Appendix 2.

Ranking the Newlyweds by Husband and Wife’s Race/Ethnicity

By husband and wife’s race or ethnicity, newlyweds are further divided into 10 groups, including four groups of intra-married couples (white, Hispanic, Asian and black) as well as six types of mixed couples involving a white husband or wife. The couple is indicated in the format that the husband’s race/ethnicity goes first and the wife’s race/ethnicity goes second. For example, “Asian/white” refers to couples in which the husband is Asian and the wife is white. 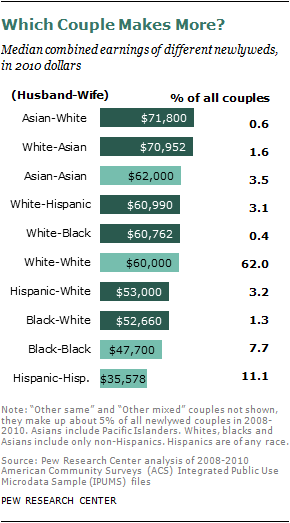 Newlywed couples whose husband and wife are both Asian make $62,000 a year, which puts them third on the earnings list. They are also the highest-paid couples among all four types of newlyweds composed of a bride and groom from the same race or ethnicity. 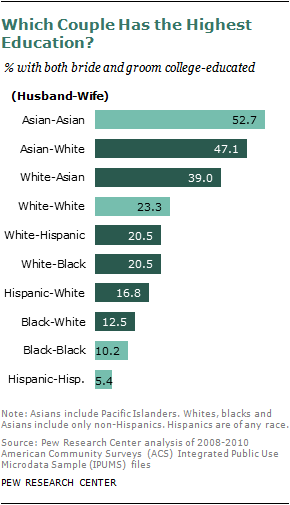 College Education: Consistent with their highest educational achievement in general, Asian newlywed couples (both bride and groom are Asian) rank as the most highly educated couple. More than half of Asian couples (53%) include a husband and wife who are both college-educated.

On the flip side, compared with their counterparts who married in, Hispanics and blacks (both men and women) who married whites are more likely to be in a union where both partners are college-educated. 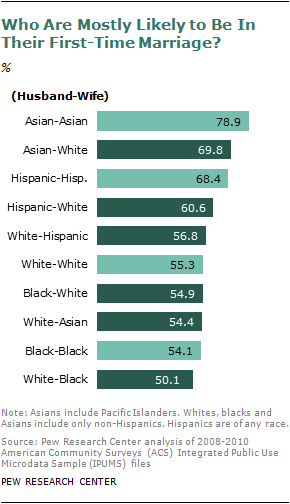 First Marriage: For newlyweds who married between 2008 and 2010, nearly six-in-ten (58%) were married for the first time (both bride and groom).

Nearly eight-in-ten Asian couples (79%), well above the average share, were first-time newlyweds, the highest share among all researched newlyweds in this study.

For about 55% of white newlyweds (both husband and wife white), it was their first marriage. This share is virtually equal among couples of black husband/white wife, white husband/Asian wife, and black husband/black wife (black couples). The newlywed couples consisting of a white man and a black woman have the lowest share of being first marriage for both (50%); about half of them have at least one spouse who has been married before. 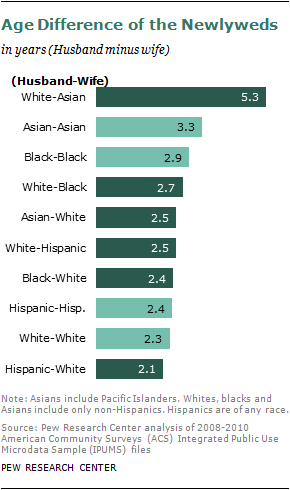 Age Difference: Among newlyweds married between 2008 and 2010, the husband is on average about 2.5 years older than his wife. With an age difference of more than five years, newlyweds involving a white husband and an Asian wife top the list in terms of age differences.

The age difference between husband and wife is more similar among the rest of couples, which ranges from 2.1 years (Hispanic husband/white wife) to 2.7 years (white husband/black wife). 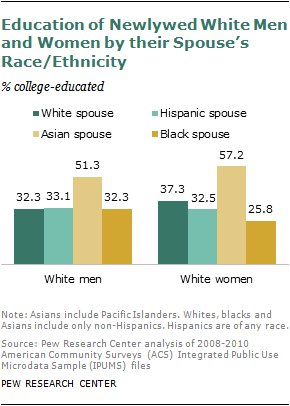 Differences between couples who intermarried and those who married in are largely due to the characteristics of individual men and women who made the choices about whom to marry. 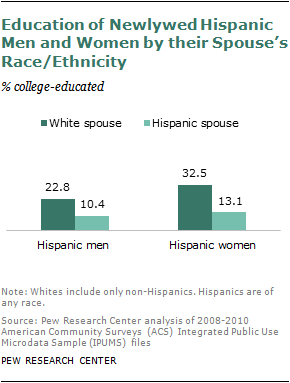 Are the individuals who choose to marry out any different from their counterparts who marry in? This section compares the education levels of newlyweds by whom they marry. Whites, Hispanics, blacks and Asians are examined separately, for both men and women in each group. 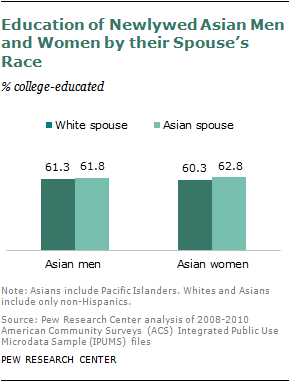 For more characteristics of individual men and women who marry out, see Appendix 3.