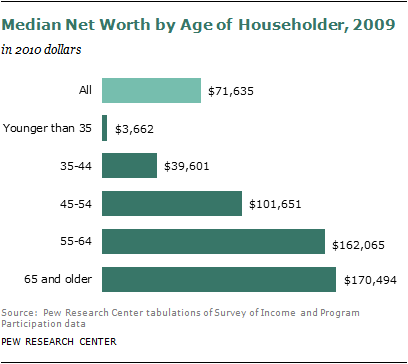 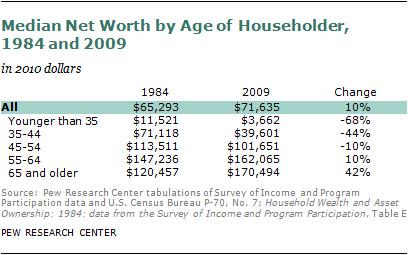 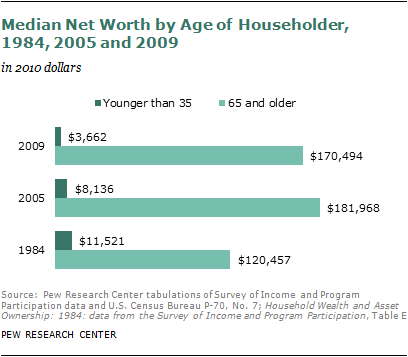 These age-specific trends in net worth mean that the gap between older and younger American households increased dramatically from 1984 to 2009.

Wealth losses were proportionally smaller for each subsequent age group, with households headed by adults ages 65 and older in 2009 having 6% less net worth than the oldest households in 2005.

Households with No or Negative Net Worth

The gap between young and old on this measure grew markedly from 1984 to 2009, due primarily to the growing share of young households with zero or negative net worth. The share among households headed by adults younger than 35 was 18 percentage points higher in 2009 than it had been in 1984. By comparison, this share was 2 percentage points higher in 2009 among households headed by adults ages 65 and older than it had been in 1984. 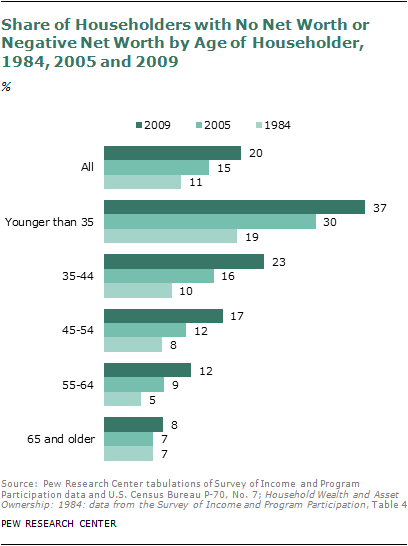 While the divergence in the share of younger and older households with no positive net worth was already well under way by 2005, the onset of the recession sped up the process. Among households headed by people younger than 35, the share with negative or no wealth was seven percentage points higher in 2009 than it had been in 2005. By comparison, the share of households headed by adults ages 65 and older with no wealth or negative wealth was only one percentage point higher in 2009 than in 2005.

Although this report does not delve deeply into how wealth is distributed overall, it is notable that the share of households at the top and bottom of the wealth curve has grown. As shown above, a growing share of all households (and shares of all age groups) has no wealth or negative wealth. 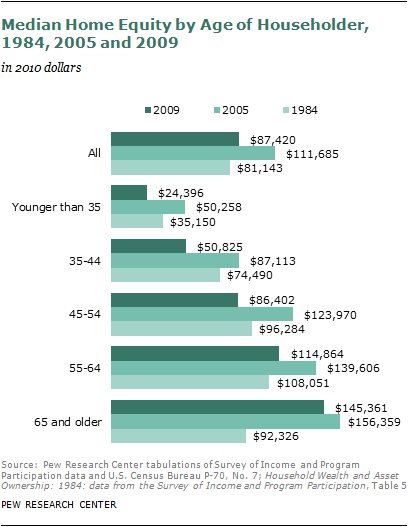 Because home equity is such a crucial underpinning of wealth for the typical American household, any change in the value of homes has a major impact on net worth. The U.S. housing crisis that began in 2006 and drove down home values was the largest contributor to changes in wealth of the typical household in the past half-decade. Declines in equity were steepest for young homeowners. 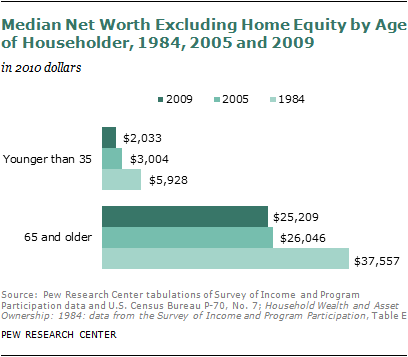 The recent nationwide plunge in housing values affected homeowners in all age groups, but older Americans experienced markedly smaller losses in home equity than younger ones. Older homeowners also had more good fortune over the longer term. Compared with their counterparts in 1984, older homeowners in 2009 had a substantial increase in median value of their home equity while younger ones had a notable loss.

Over the longer term, too, the oldest homeowner households have experienced the largest rises in home equity compared with their same-age counterparts in earlier decades, while younger householders have had the largest losses. Overall, the median equity level of owned homes rose 8% from 1984 to 2009. For households with homeowners younger than 35, though, equity was 31% less in 2009 than 1984. For households with owners ages 65 and older, the median equity value rose 57% during this period. 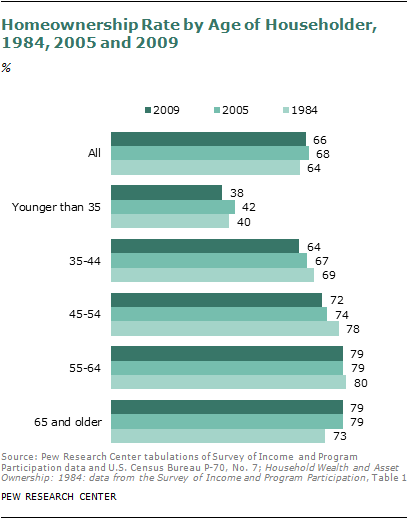 Two-thirds of American householders (66%) owned their homes in 2009.8 As might be expected, older households are more likely than younger ones to own a home, which helps account for their greater wealth.

Although home equity is the largest source of American household wealth, other types of assets are more widely owned. They include motor vehicles (84%) as well as savings accounts and other interest-earning assets at financial institutions (65%).

By contrast, the share of householders younger than 35 who own homes fell to 38% in 2009 from 42% in 2005, the largest percentage point decline among age groups. In 1984, 40% of householders in this age group owned their own homes.

Among all households, both renters and owners, owned homes represented 39% of mean total net worth in 2009. The share of wealth represented by a home depends on the home’s value and on the value of other assets in a household’s portfolio, offset by debt.

Among households headed by adults ages 65 and older, 44% of mean total wealth in 2009 was in the value of their home. For the comparable age group in 1984, the home represented just 39% of total wealth.

For households headed by adults younger than 35, an owned home accounted for 31% of mean net worth in 2009, down from 46% in 1984. The share of mean total net worth accounted for by home equity among these young adults had been 52% in 2005, before the national fall in housing prices.