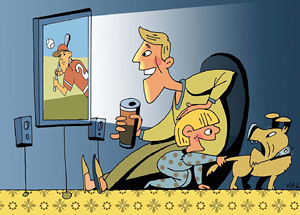 No one can argue with the fact that today’s fathers are more “hands on” with their kids than fathers were a generation or two ago. With so many dual income families, fathers often have to share the workload of childrearing and household chores. So how are fathers faring in this brave new world of changing diapers and driving carpools? The verdict is mixed on how well today’s dads measure up — about half of the public says they’re doing a worse job when compared with fathers a generation ago; the other half says they’re doing as well or even better.

A broad consensus holds that it is harder to be a father now than it was 20 or 30 years ago, and on this point men and women agree. Fully 59% of men and 62% of women say today’s dads have a tougher time of it. Only 12% of the public says it easier to be a dad today, while roughly a quarter say it’s about the same as it was a generation ago. People generally feel the same about motherhood. Seven-in-ten adults say it’s harder to be a mom today than it was in the past, and only 11% see it as easier.

Interestingly enough, when it comes to evaluating today’s fathers, dads’ harshest critics turn out not to be women, but men. For example, on the question of how good a job fathers are doing raising their kids, women actually have a more benevolent view. A majority (56%) of women say today’s dads are doing as good a job or a better job raising their kids compared with fathers a generation ago, while four-in-ten say they are doing a worse job. Men, however, take a more critical view: Only 41% of men say today’s dads match or better the performance of the dads of the 1970s and ’80s, compared with a majority (55%) who say today’s dads are doing a worse job.

Notable among the biggest fans of today’s dads is a group of women who may well be the best qualified to evaluate them: working moms. They’re married to these men after all, and they function at the epicenter of the busy households where modern dads must pitch in at every turn.

Fully 72% of married moms who work at least part-time and are raising young children say dads are now doing as good a job or better than their counterparts did a generation ago; only 26% say they’re falling short.

Dads may be working harder at home and getting more involved in their kids’ lives these days, but we won’t know for another 20 to 30 years, when today’s children are fully grown, whether their fathers have succeeded in knocking their mothers off the top of the family pedestal. Surveys of adult children show that mom, not dad, is the parent that they feel closest to and the person they turn to for advice. In a 2005 Pew Research Center survey, 61% of adults with both parents still living said they have the most contact with their mother. Only 18% said they have the most contact with their father.

In that same survey, respondents were more than twice as likely to say they would turn to their mom in times of crisis (17%) as opposed to their dad (6%). And while 87% said they are close to their mother, fewer (74%) said the same about their relationship with their father. In this regard, dads rank below the family pet: On average, dog and cat owners feel closer to their pets than adult children feel to their fathers.