In the wake of last month’s marches for science and climate in Washington and around the country, Americans are divided in their support of the events’ goals and their sense of whether it will make a difference. In particular, a new Pew Research Center survey finds that most Democrats and younger adults are convinced that these public events will help the causes of scientists. By contrast, Republicans and older adults believe the marches will not raise public support for scientists, aid efforts to increase government funding of science, enhance the role of scientists in policy debates or lead to increased efforts to combat global climate change. 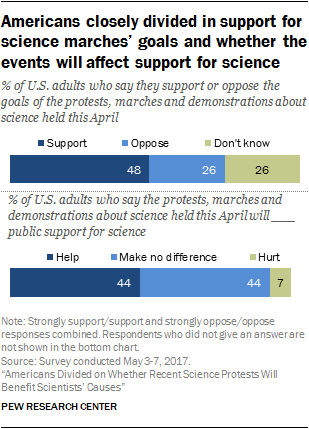 Overall, 44% of adults think the protests, marches and demonstrations will boost public support for science, while an equal share believe the protests will make no difference and 7% believe the demonstrations will actually hurt the cause. But on this and other questions about the marches there are consistent divides along political and generational lines. For example, 61% of Democrats and Democratic-leaning independents believe the marches will increase public support for science, while only 22% of Republicans and those who lean Republican say the same. Instead, 60% of these Republican backers think the protests will make no difference, compared with just 32% of Democratic partisans who think that.

These are some of the findings from a Pew Research Center survey conducted among a nationally representative sample of 1,012 adults, ages 18 or older from May 3-7, 2017.

The March for Science, which took place on April 22, stemmed from a Reddit thread made on President Donald Trump’s inauguration day. A number of groups were involved in planning the event held in Washington, D.C., and some 600 other locations around the world. The People’s Climate March was organized before the 2016 election and held April 29 to voice support for action to address global climate change. Rather than being in support of one specific policy outcome, marchers said there were a number of reasons they participated in the two science marches held in close sequence at the end of April. 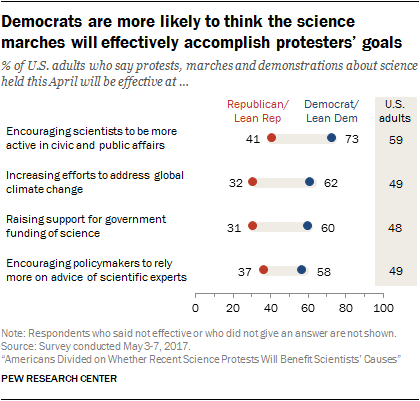 Americans render a split verdict about the marches and their impact, though a majority (59%) thinks that the protests will be effective in encouraging scientists to be more active in civic and public affairs. But on this and other possible impacts from these marches, there are consistent divides between political party groups: 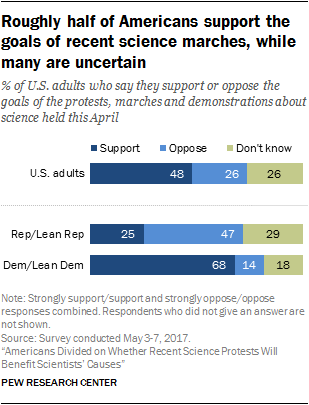 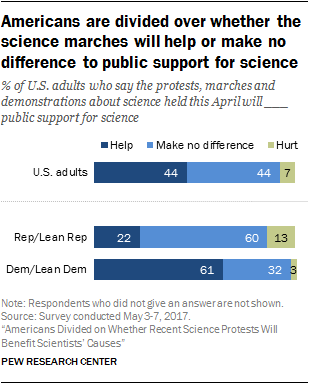 Younger Americans hold different views on protests and their impact

While there are sizable partisan divisions on these issues, the differences between younger and older adults are also striking. 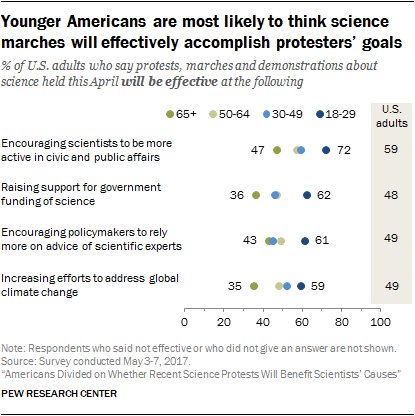 And in terms of perceived impact, 72% of those ages 18 to 29 think the marches will encourage scientists to be more active in civic affairs, compared with 47% of those ages 65 and older. Some 62% of younger adults believe the protests will raise support for government funding of science, while only 36% of those 65 and older say this. Additionally, 61% of younger adults think the protests will encourage policymakers to rely more on the advice of scientific experts, versus 43% of adults 65 and older. 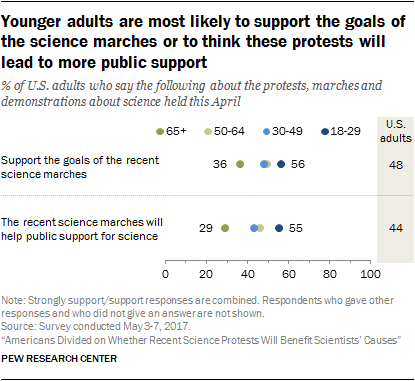 These differences by age hold even when accounting for the tendency of older adults to identify with the GOP. There are no notable demographic differences in views about the recent science protests by gender or education.

President Trump’s election signaled major changes to federal policy connected with science, particularly for climate and environmental policies but also for funding science research at NASA, the National Institutes of Health and other federal agencies. Many in the scientific community have voiced concern about Trump’s views about science issues, particularly childhood vaccines and climate change, and have raised concerns about the appointment and role of science advisers in guiding policy decisions in the coming years. 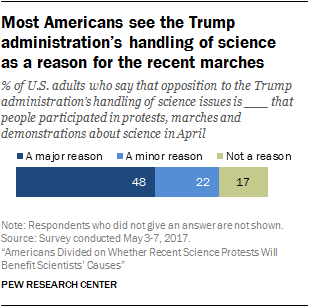 Asked whether the pro-science demonstrators were driven to act by the Trump administration’s handling of science issues, 48% say they think opposition to Trump was a major reason people participated, 22% say it was a minor reason, 17% say it was not a reason at all and 13% say they do not know. Fully 63% of Democrats and Democratic leaners say opposition to Trump was a major reason for marchers’ participation, compared with 36% of Republicans and Republican leaners who say this.

Those following news about the recent science marches are particularly likely to believe that opposition to the new administration’s handling of science issues is a motivating factor for the recent protests. Some 55% of those who had heard at least a little about these marches say opposition to the Trump administration’s handling of science issues was a major reason for the protests, compared with 37% who had heard nothing about these science marches.

Split views on how the media cover protests 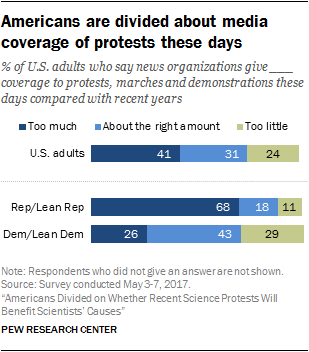