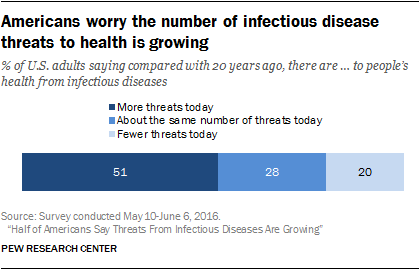 A new survey from Pew Research Center shows the public is paying attention to these threats. Fully 82% of Americans say they pay “a lot” or “some” attention to news of any kind about threats from infectious diseases. These concerns arise in a new century that has seen a number of menacing disease outbreaks, including Ebola and Middle East respiratory syndrome (MERS) lung disease in 2014, Swine Flu in 2009, SARS lung disease in 2003 and the West Nile virus in 2002. Public health officials around the globe have added the possibility of pandemics to their list of issues that should prompt international efforts. 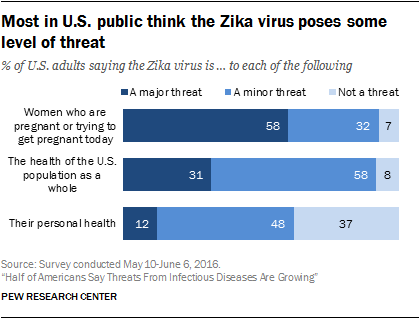 Americans’ latest focus is on the Zika virus, a mosquito-borne illness that is tied to severe birth defects in South America and the Caribbean. The new survey shows that: 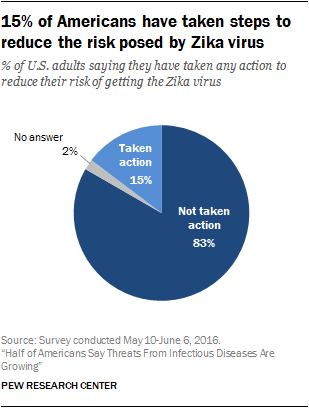 In addition, about one-in-seven adults (15%) say they have taken steps to reduce their risk of getting the virus.

There are notable demographic differences tied to people’s views about the threat posed by the Zika virus. Generally those who are most concerned include older Americans (especially older women) and those who report “fair” or “poor” health status. Blacks and those who live in the South and Northeast also tend to be more concerned about Zika. But Republicans and independents who lean Republican are about equally likely as Democrats and leaning Democrats to say Zika is a threat to public health. Congress adjourned at the end of June for a recess without acting on proposals to increase funding for an emergency program to try to halt the spread of the virus. 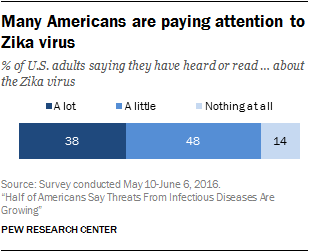 The level of attention and concern about Zika could evolve if new outbreaks occur and news coverage of the virus potentially increases heading into the Summer Olympics Games in Brazil. By the height of the most-recent major Ebola outbreak in Africa in the fall of 2014, Pew Research Center surveys found that 98% of Americans had heard at least a little about the Ebola problem. Some 79% had heard a lot about the Ebola situation at that time, compared with the 38% who say they have heard a lot about the Zika problem now.

While the questions asked about Ebola differed from the current survey, as a point of broad comparison, 41% of Americans said at the height of the Ebola outbreak they were at least somewhat “worried that they themselves or a family member would be exposed to the virus.” In the Zika survey, only 12% say Zika is a major threat to them, personally; another 48% consider it a minor threat. The Zika question did not ask about other family members.

The Zika situation seems to be garnering attention at a similar level to the swine flu outbreak that arose in May 2009 and the worries about the SARS virus in 2003. In 2009, the Center found that 42% of adults were paying “a lot” of attention to the issue of whether there would be enough vaccines in the upcoming swine flu season. In 2003, Pew Research Center found that 39% were paying close attention to the SARS story. In 2002, a Center survey showed that 34% were paying close attention to stories about the West Nile virus. See this 2014 Pew Research Center post for a rundown of findings in previous Center surveys.

Those who are most concerned about the Zika virus include older adults, especially older women, and those in poorer health 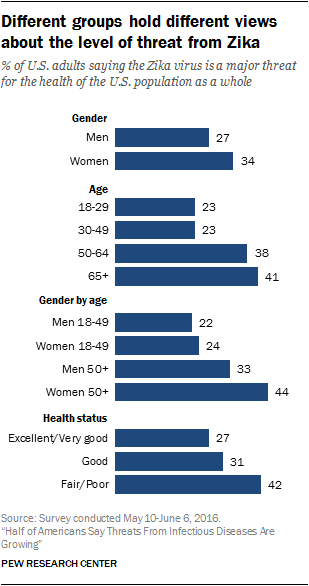 Generally, those who are most concerned about Zika include older adults, especially older women, and those who report “fair” or “poor” health status. For instance, 44% of women ages 50 and older think Zika is a major threat to the U.S. population as a whole, compared with 33% of older men. By contrast, 23% of adults under age 50 consider Zika a major threat to the population. Additionally, 42% of those who report being in “fair” or “poor” health feel it is a major threat vs. 27% of those who say they are in “excellent” or “very good” health.

These groups have traditionally been more focused than others on health and medical information. 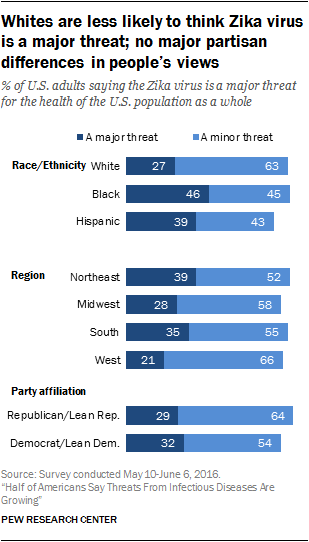 Additionally, blacks as compared with whites, and those living in the South and Northeast are more inclined to see Zika as a threat to public health. Some 46% of blacks, compared with 27% of whites, believe Zika is a major threat to the population. (The 39% of Hispanics saying Zika is a major threat is not statistically different than the share saying the same among either blacks or whites.) These findings are in line with previous surveys showing a higher level of concern among blacks about some health issues, particularly about experimental-health matters.

There were also regional differences about the level of threat Zika poses. Some 39% of Northeasterners and 35% of Southerners believe the Zika virus is a major threat to the American population, compared with 21% of Westerners and 28% of Midwesterners who say they think the threat level is high. 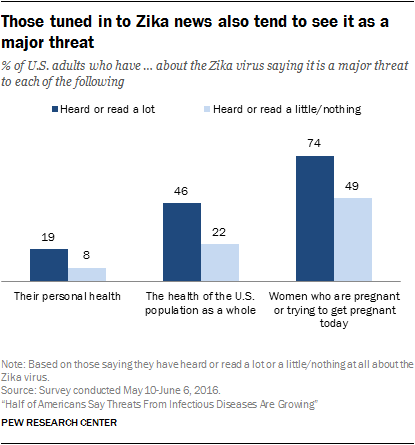