Public concern about the spread of the Ebola virus in the U.S. has increased since early October. Currently, 41% are worried that they themselves or someone in their family will be exposed to the virus, including 17% who say they are very worried. In a survey two weeks ago, 32% worried about exposure to Ebola; 11% said they were very worried. 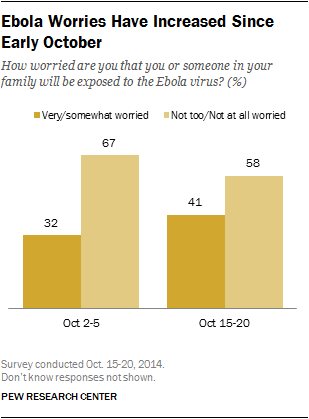 Most people (58%) express little or no concern about becoming exposed to Ebola, though that is down from 67% in early October. And majorities have at least a fair amount of confidence in both the federal government and U.S. hospitals to deal with the disease.

Meanwhile, the U.S. military’s efforts to address the spread of the disease at its epicenter draw widespread public support. Nearly eight-in-ten (77%) favor the U.S. sending military troops, food and medical supplies to West Africa to combat the spread of the virus in the region.

The survey finds that Ebola news has registered widely with the public – fully 98% have heard at least a little about the current outbreak of the virus. And nearly half of Americans (49%) say they are tracking news about Ebola “very closely.” That is 20 points higher than the share following news about U.S. airstrikes against ISIS in Iraq and Syria very closely (29%), and more than 30 points higher than the percentage paying very close attention to the midterm elections (16%). 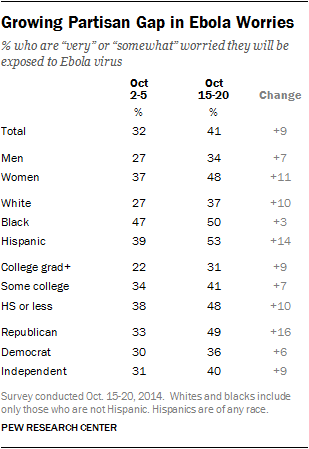 Since early October, worries about Ebola exposure have increased across most demographic and partisan groups. But the rise in concern has been particularly striking among Republicans. 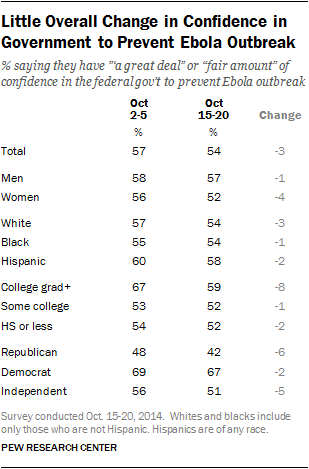 There has been less change among Democrats – 36% now have at least some concern about personal exposure to Ebola, compared with 30% in early October. The partisan gap in Ebola worries, which was negligible two weeks ago (three points), has increased to 13 points in the current survey.

Among demographic groups, concern about the Ebola virus continues to be higher among women than men; currently, 48% of women are at least somewhat worried about becoming exposed to the virus compared with 34% of men. And as was the case in early October, minorities and people with less education are more likely to be worried about Ebola than are non-Hispanic whites and college graduates.

By about four-to-one (77% to 19%), the public favors U.S. efforts to combat the Ebola virus in West Africa, including the dispatch of U.S. military troops and food and medical supplies to the region.

Support for the U.S. actions to stem Ebola’s spread in West Africa span partisan and demographic categories. Majorities of Democrats (85%), independents (76%) and Republicans (70%) support U.S. efforts to combat the disease in West Africa. 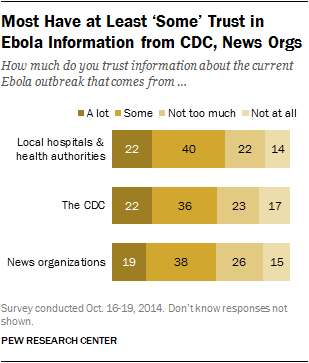 The public has some degree of trust in information they are getting about the Ebola outbreak from a variety of sources. A separate survey, conducted Oct. 16-19 among 1,000 adults, finds that majorities have at least some trust in the information they are hearing from local hospitals and health authorities (22% a lot, 40% some) and the Centers for Disease Control and Prevention (22% a lot, 36% some). Most also trust the news organizations covering Ebola at least somewhat (19% have a lot of trust, 38% have some). 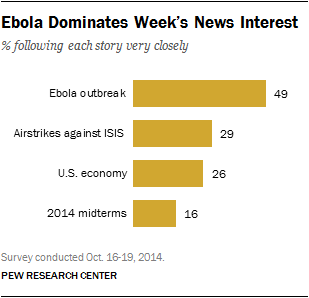 Roughly half of the public (49%) very closely followed news about Ebola last week, a far greater share than interest in news about ISIS airstrikes (29%), U.S. economic news (26%) and the upcoming congressional elections (16%). Overall, last week’s Ebola interest ranks it near the top of the year’s closely followed stories.

On the topic of Ebola, there is only a modest age difference in news interest. While 56% of adults 65 and older very closely followed news about the outbreak, 37% of adults under 30 also tracked it closely.

Ebola Worries Rise, But Most Are ‘Fairly’ Confident in Government, Hospitals to Deal With Disease
Survey ReportRepublicans Increasingly Worried about Ebola ExposureMost Favor U.S. Efforts to Stem Ebola’s Spread in West AfricaTrust in Ebola Information and News Interest
About the Surveys