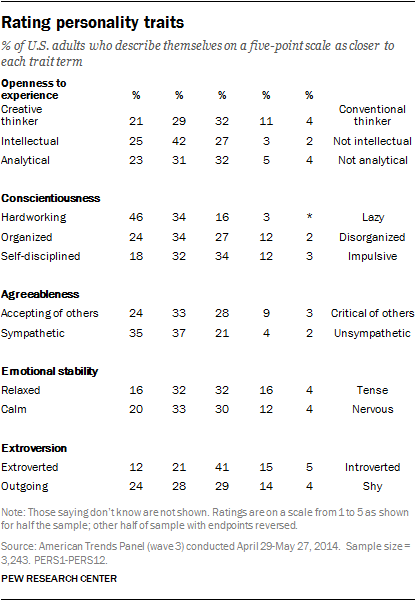 There is a long history of attention to personality differences in public thinking and engagement with public affairs. A number of recent studies have shown an association between personality traits and political attitudes and behaviors.8 Many of these studies evaluate a set of five personality traits (known as the Big Five) that are thought to comprise the main factors or dimensions of personality.9 These are openness to experience, conscientiousness, agreeableness, emotional stability and extroversion.

The Pew Research Center survey uses a set of 12 questions to create multi-item indices for each of the Big Five personality dimensions. Openness to experience, a dimension often described as reflecting a tendency to think creatively and imaginatively, was measured based on average ratings of being a creative thinker (vs. a conventional thinker), being intellectual (vs. not intellectual) and being analytical (vs. not analytical). Conscientiousness, a trait linked with successful outcomes on achieving long-term goals, is based on the average ratings of being hardworking (vs. lazy), self-disciplined (vs. impulsive) and organized (vs. disorganized). Agreeableness is based on two self-ratings: being accepting of others (vs. critical of others) and of being sympathetic (vs. unsympathetic). This dimension is associated with a tendency to trust others. Emotional stability is based on ratings of being relaxed (vs. tense) and of being calm (vs. nervous). Those high in emotional stability tend to be less reactive to stress and report less anxiety. Extroversion is based on ratings of being extroverted (vs. introverted) and outgoing (vs. shy). 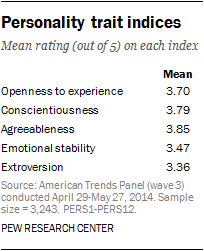 The analysis of personality traits takes this tendency into account by comparing people who, in relative terms, see themselves as more or less likely to reflect each trait across the set of ratings. On each personality index,10 respondents with average ratings above the overall mean were classified as “high” on that trait and those below the mean were classified as “low.”

Interest in science and technology is related to openness to experience 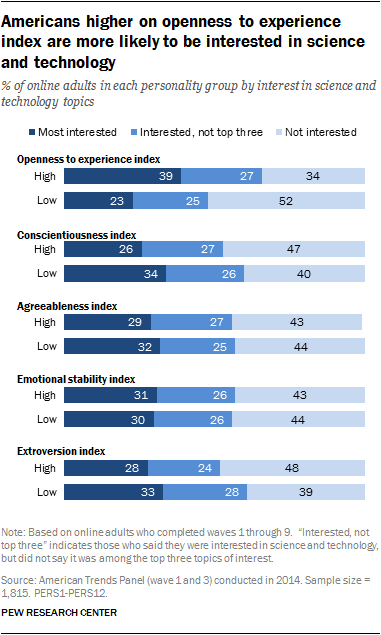 Next: Acknowledgements
← Prev Page
Page1Page2You are reading page3Page4Page5
Next Page →