Before you read the report, test your science knowledge by taking the interactive quiz. The short quiz tests your knowledge of questions recently asked in a national poll. After completing the quiz, you can compare your score with the general public and with people like yourself. 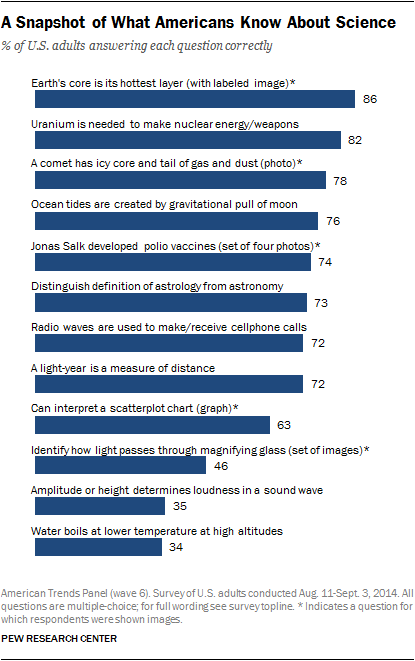 A new Pew Research Center survey finds that most Americans can answer basic questions about several scientific terms and concepts, such as the layers of the Earth and the elements needed to make nuclear energy. But other science-related terms and applications, such as what property of a sound wave determines loudness and the effect of higher altitudes on cooking time, are not as well understood.

Most Americans (86%) correctly identify the Earth’s inner layer, the core, as its hottest part, and nearly as many (82%) know uranium is needed to make nuclear energy and nuclear weapons.

But far fewer are able to identify the property of a sound wave that determines loudness. Just 35% correctly answer amplitude, or height. Some 33% incorrectly say it is frequency and 23% say it is wavelength. And just 34% correctly state that water boils at a lower temperature in a high-altitude setting (Denver) than near sea level (Los Angeles).

Fully 73% of Americans distinguish between astronomy and what is commonly considered a pseudoscience: astrology. Twenty-two percent of Americans incorrectly say that astronomy – not astrology – is the study of how the positions of stars and planets can influence human behavior. Another 5% give some other incorrect response.

How much Americans appear to know about science depends on the kinds of questions asked, of course. Science encompasses a vast array of fields and information, and the questions in the new Pew Research survey represent a small slice of science knowledge. On Pew Research Center’s set of 12 multiple-choice questions – some of which include images as part of the questions or answer options – Americans gave more correct than incorrect answers; the median was eight correct answers out of 12 (mean 7.9). Some 27% answered eight or nine questions correctly, while another 26% answered 10 or 11 items correctly. Just 6% of respondents got a perfect score.

A variety of scholars have argued that public understanding of science issues and concepts is a hallmark of an informed public.1 As developments in science and technology raise new issues for public debate – from driverless cars and space exploration to climate change and genetically modified crops – a public with more knowledge of scientific facts and principles is often seen as one better able to understand these developments and make informed judgments.2

One major avenue for science learning is through the schools. But neither the public nor those connected to science have strongly positive views about America’s science and technology education. A 2015 Pew Research report found that the general population and members of the American Association for the Advancement of Science (AAAS) both see U.S. K-12 education in science, technology, engineering and mathematics (STEM) fields as “average” or “below average” compared with other industrialized countries.

A minority of 29% of Americans and 16% among AAAS members consider the country’s K-12 STEM education to be among the best in the world.

Moreover, 84% of AAAS members consider Americans’ limited knowledge about science to be a major problem for the scientific enterprise. Further, most of the AAAS members say that too little STEM education is a major reason that the public has limited science knowledge.

Those with higher education levels are more likely to know answers to questions about science. There are also times when gender, age, race and ethnicity matter.

There are substantial differences among Americans when it comes to knowledge and understanding of science topics. In the new survey, education proves to be a major factor distinguishing higher performers on our science questions from those who get fewer correct. Adults with postgraduate and college degrees performed better than those with a high school diploma or less. This pattern is consistent with a 2013 Pew Research report on this topic. 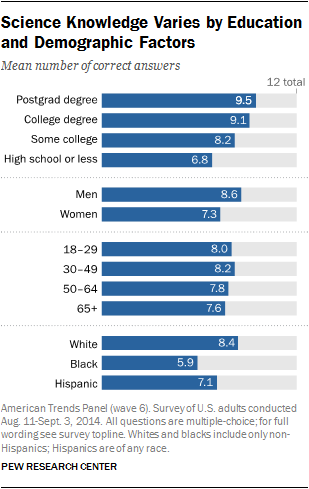 Pew Research’s findings are also consistent with analysis of the factual knowledge index in the National Science Board’s Science and Engineering Indicators. That research finds that higher educational levels are associated with more factual knowledge of science, and that college graduates who took at least three college-level courses in science or mathematics have higher levels of science knowledge than do those who took fewer science and math courses.3

The new Pew Research survey also finds gaps in science knowledge between men and women, with men outperforming women on many questions – even when comparing men and women with similar levels of education.

In previous Pew Research surveys that are also detailed in this report, there were no differences or only modest knowledge differences between men and women on four health and biomedical topics in the news. For instance, on one previous question, women were more likely than men to answer correctly that antibiotics do not kill both viruses and bacteria. At the same time, men were more likely than women to know that the main function of red blood cells is to carry oxygen throughout the body. The Science and Engineering Indicators report found no difference between adult men and women on factual knowledge of biomedical topics.5

There are also differences associated with race and ethnicity in the new survey’s 12 questions. Whites are more likely than Hispanics or blacks to answer more of these questions correctly, on average; the mean number of items correct is 8.4 for whites, 7.1 for Hispanics and 5.9 for blacks. The pattern across these groups and the size of the differences vary, however.

The findings on race and ethnicity are broadly consistent with results on science knowledge questions in the General Social Surveys between 2006 and 2014. Pew Research analysis of the GSS data finds white adults scored an average of 6.1 out of 9 questions correctly, compared with 4.8 for Hispanics and 4.3 for blacks. While whites, blacks and Hispanics with higher education levels know more factual science items on average, mean differences by race and ethnicity occur among all education levels.6 As with gender differences, differences by race and ethnicity could tie to a number of factors, including differences in areas of study at the high school, college and postgraduate levels and other factors.7 To the extent that science knowledge, especially on issues in the news and emerging scientific developments, is learned in connection with adult life activities, the long-standing underrepresentation of blacks and Hispanics in the science, technology, engineering and mathematics workforce could also be a contributing factor.8

The questions in the new Pew Research Center survey represent only a small slice of science knowledge. Science encompasses a vast array of fields and information. Across the set of 12 science knowledge questions in this survey, it is clear that some information is widely known while other information is much less so. To allow for comparisons across a wider array of questions and topics, we include a series of tables in this report with findings from the new Pew Research survey and from previous Pew Research studies. Comparisons across surveys should be made cautiously. The new survey includes several questions with images or photographs displayed online or in a print questionnaire. Past surveys were, with one exception, conducted by telephone and thus relied solely on respondents’ aural and verbal skills. Little is known about how different modes of interview could influence the findings. Nonetheless, these comparisons help illustrate that the broad patterns of differences in science knowledge by education and demographic subgroups in this new survey are generally in keeping with previous Pew Research surveys that tapped public knowledge about science.

Next: What Americans Know About Science, Question by Question
← Prev Page
You are reading page1Page2Page3Page4Page5Page6Page7Page8
Next Page →