American scientists see themselves as facing a challenging environment and are trying to respond to it. As we detailed in our recent report, scientists, while still largely positive about the state of the field, are less upbeat than they were five years ago. Moreover, most scientists believe that policy regulations related to land use and clean water and air are not often guided by the best scientific findings. Notable numbers also say they do not think the best scientific information is often used in crafting policies around food safety and new drug and medical treatments.

Additionally, scientists are worried about the prospects for future funding of science research and about attracting talent to their fields. Fully 83% of AAAS scientists report that obtaining federal research funding is harder today than it was five years ago. The share saying this is a good or very good time to begin a career in their specialty is down 8 points, from 67% in 2009 to 59% today. And 58% say it is harder to attract the best young people to a science career than it was five years ago.

In this context, the Pew Research survey of AAAS scientists also finds that most favor active engagement in public debates. Fully 87% of AAAS scientists agree with the statement “Scientists should take an active role in public policy debates about issues related to science and technology.” Just 13% of these scientists back the statement “Scientists should focus on establishing sound scientific facts and stay out of public policy debates.”

Support for active engagement in policy debates is widespread among all age groups with 90% of those under age 50 saying this, and slightly fewer among older groups saying the same (86% of those 50 to 64 and 84% of those ages 65 and older). Strong majorities of AAAS scientists from all disciplines say that scientists should take an active role in policy debates ranging from 92% among those in the social sciences and 88% among biomedical scientists to 81% each among earth scientists and engineers.

Scientists see public debates and interest in their work 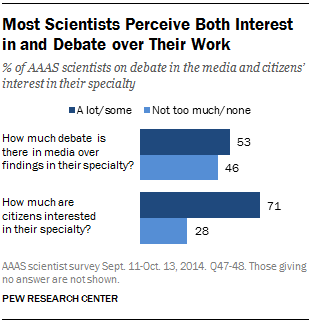 Other Pew Research surveys of American adults have shown a sizable share expresses an interest in science, and 37% of adults in one recent survey say they enjoy keeping up with news about science “a lot.” 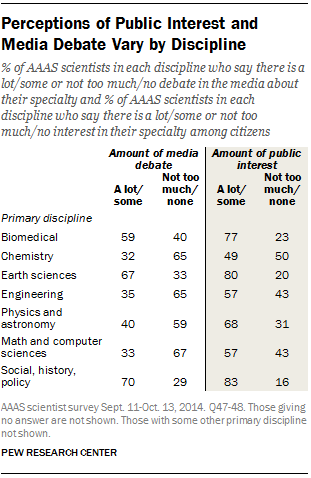 Those working in earth and environmental sciences and working in the social sciences are more likely than those in other disciplines to see both public interest and debate in the news about their primary specialty areas. By comparison, chemists, engineers, math and computer scientists, and physicists and astronomers are less likely to say there is a lot or some media debate and interest among non-expert citizens in their fields.

More scientists now say news coverage of developments in their field is important for advancement, and about a fifth believe social media promotion is important, too. 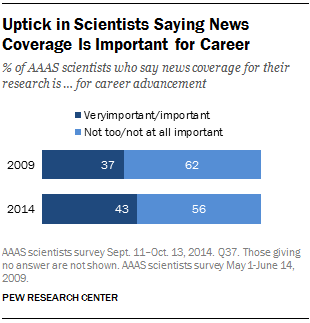 Furthermore, about a fifth of AAAS scientists (22%) believe that generating attention in social media such as Facebook and Twitter is either very important (4%) or important (18%) for people to advance in their disciplines. Fully 77% say that promoting their research on social media is not too or not at all important for career advancement in their specialty.

Younger scientists, more so than older ones, say that promoting their findings on social media sites such as Twitter, LinkedIn or Facebook is important for career advancement. Fully 31% of AAAS scientists under age 35 say social media is important for career advancement. By comparison, just 17% of those ages 65 and older say this. 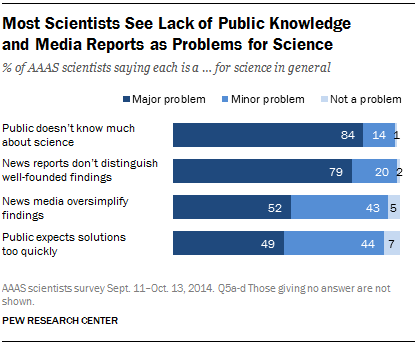 This sense that there are personal stakes in engaging journalists links with other findings from the AAAS scientist survey about how reporters do their jobs and how the public itself comprehends scientific information: 79% of AAAS scientists believe it is a major problem for science that news reports don’t distinguish between well-founded and not well-founded scientific findings. Further, 52% say that oversimplification of scientific findings is a major problem for science in general.

Next: How Scientists Engage
← Prev Page
Page1You are reading page2Page3Page4
Next Page →