Home Research Topics Religion Religions Religiously Unaffiliated
How we did this

Pew Research Center conducted this analysis as part of a continuing effort to track changes in the U.S. religious landscape, including shifts in Americans’ religious affiliation and observance. To do this, researchers looked at a variety of surveys conducted by the Center since 2007.

The most recent data is from the Center’s 2020 and 2021 National Public Opinion Reference Surveys (NPORS). These surveys were conducted online and by mail among a nationally representative group of respondents recruited using address-based sampling, which ensures that nearly all U.S. adults have a chance of selection. This year’s study was conducted from May 29 to Aug. 25, 2021.

Estimates from 2007 and 2014 come from Pew Research Center’s Religious Landscape Studies, which surveyed roughly 35,000 U.S. adults via telephone each year. All other estimates from 2019 and earlier come from other random-digit-dial telephone surveys, mostly the Center’s political surveys. All data is weighted to be representative of the U.S. adult population by gender, race, ethnicity, age, education and other categories.

For more, see the methodology, which includes the questions used in this report. 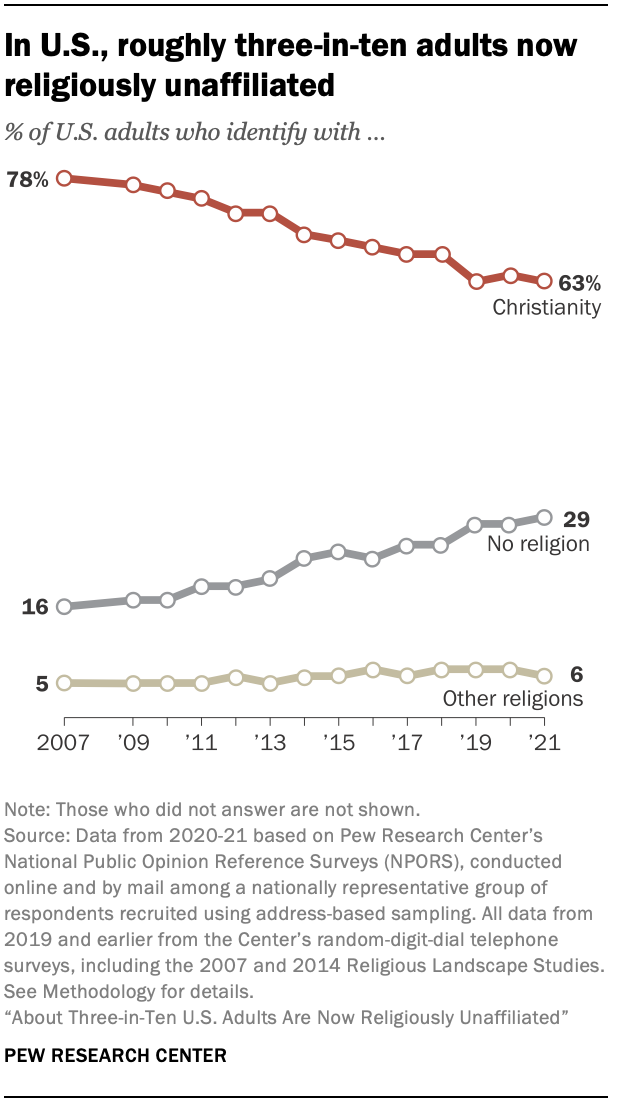 The secularizing shifts evident in American society so far in the 21st century show no signs of slowing. The latest Pew Research Center survey of the religious composition of the United States finds the religiously unaffiliated share of the public is 6 percentage points higher than it was five years ago and 10 points higher than a decade ago.

Christians continue to make up a majority of the U.S. populace, but their share of the adult population is 12 points lower in 2021 than it was in 2011. In addition, the share of U.S. adults who say they pray on a daily basis has been trending downward, as has the share who say religion is “very important” in their lives.

Currently, about three-in-ten U.S. adults (29%) are religious “nones” – people who describe themselves as atheists, agnostics or “nothing in particular” when asked about their religious identity. Self-identified Christians of all varieties (including Protestants, Catholics, members of the Church of Jesus Christ of Latter-day Saints, and Orthodox Christians) make up 63% of the adult population. Christians now outnumber religious “nones” by a ratio of a little more than two-to-one. In 2007, when the Center began asking its current question about religious identity, Christians outnumbered “nones” by almost five-to-one (78% vs. 16%). 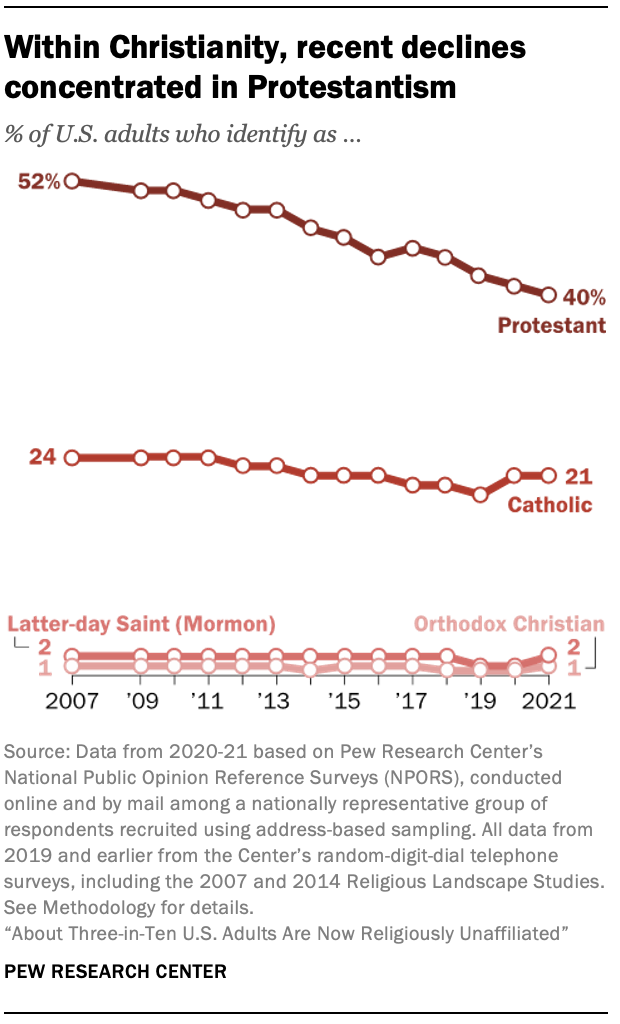 The recent declines within Christianity are concentrated among Protestants. Today, 40% of U.S. adults are Protestants, a group that is broadly defined to include nondenominational Christians and people who describe themselves as “just Christian” along with Baptists, Methodists, Lutherans, Presbyterians and members of many other denominational families. The Protestant share of the population is down 4 percentage points over the last five years and has dropped 10 points in 10 years.

Within Protestantism, evangelicals continue to outnumber those who are not evangelical. Currently, 60% of Protestants say “yes” when asked whether they think of themselves as a “born-again or evangelical Christian,” while 40% say “no” or decline to answer the question. 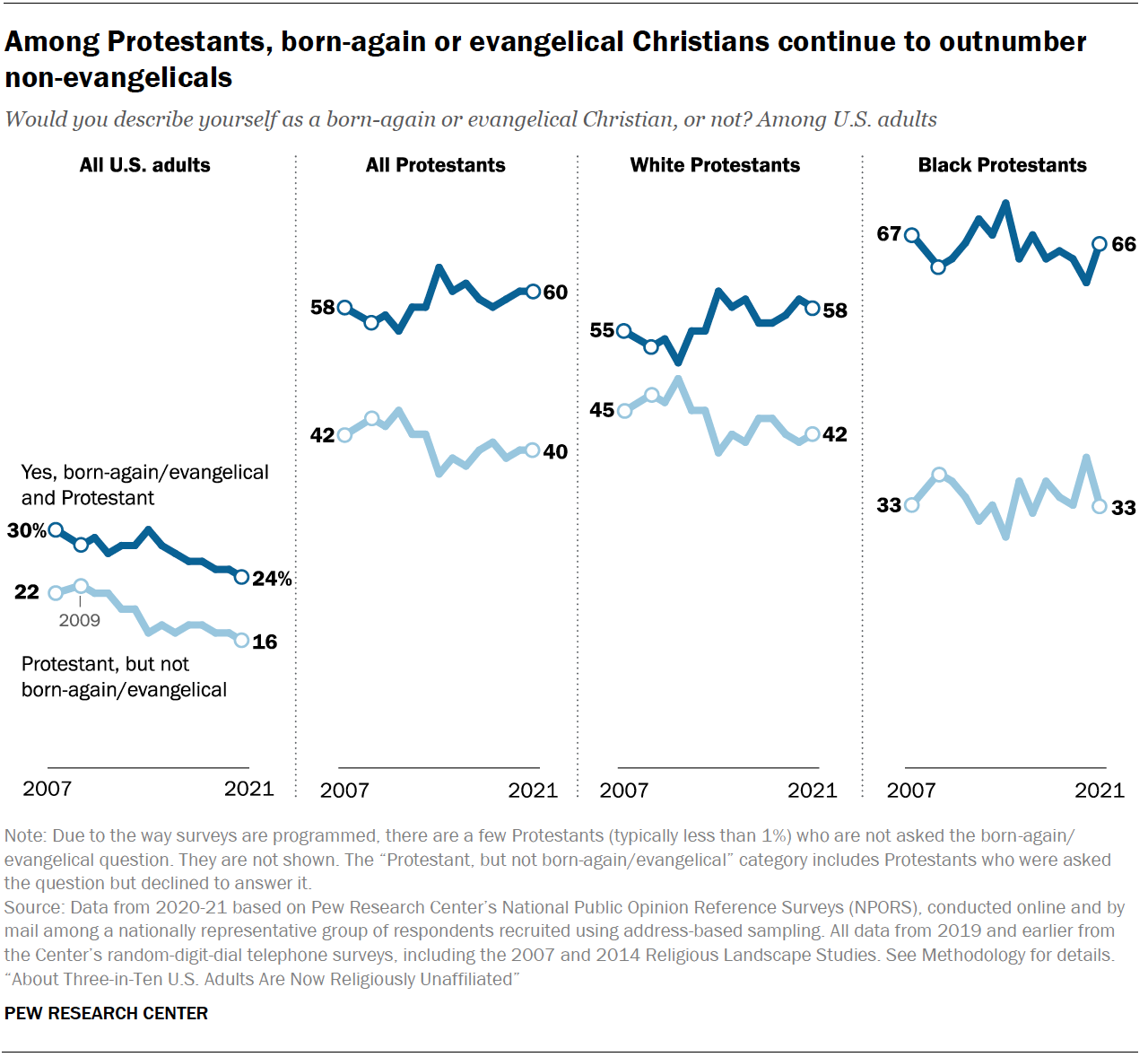 These are among the key findings of the latest National Public Opinion Reference Survey (NPORS), conducted by Pew Research Center from May 29 to Aug. 25, 2021. NPORS is an annual survey (first done in 2020) conducted online and on paper (by mail) among a nationally representative group of respondents selected using address-based sampling from the U.S. Postal Service’s delivery sequence file. The Center uses NPORS to produce benchmark estimates for several characteristics of the U.S. population, including Americans’ political and religious affiliations. Readers interested in additional details about NPORS can find them in the May 2021 report “How Pew Research Center Uses Its National Public Opinion Reference Survey (NPORS).” 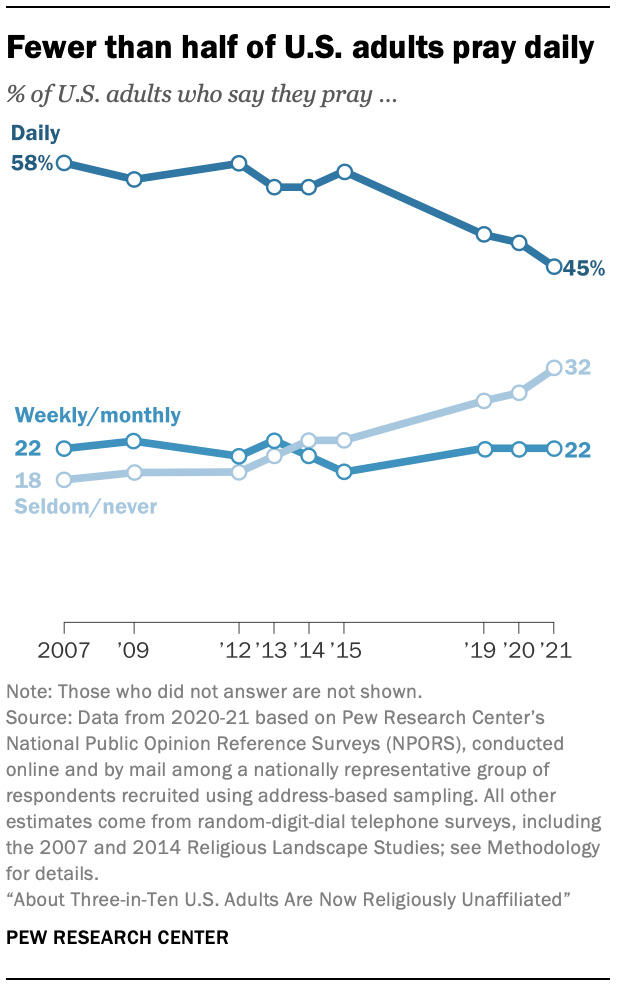 The 2021 NPORS also asked respondents how often they pray and how important religion is in their lives. Today, fewer than half of U.S. adults (45%) say they pray on a daily basis. By contrast, nearly six-in-ten (58%) reported praying daily in the 2007 Religious Landscape Study, as did 55% in the 2014 Landscape Study. Roughly one-third of U.S. adults (32%) now say they seldom or never pray, up from 18% who said this in 2007. 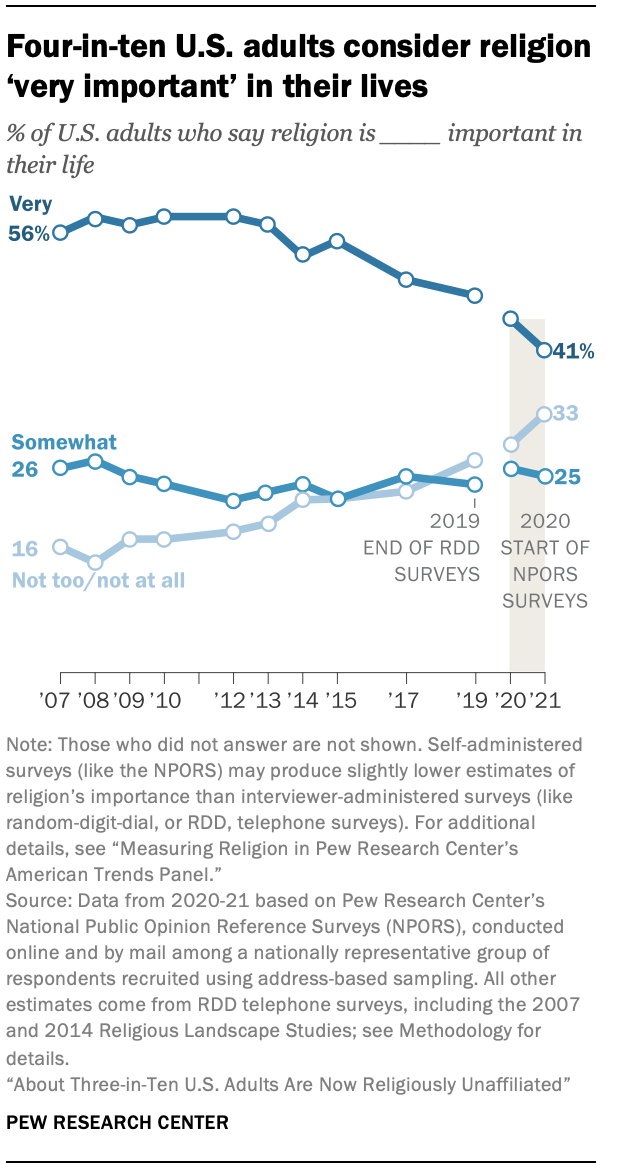 Still, the available data indicates that Americans are growing less religious by this measure, too. Random-digit-dial (RDD) telephone surveys conducted in 2017 and 2019 found fewer U.S. adults saying religion is “very important” in their lives compared with previous telephone polls. And the 2021 NPORS finds that 41% of U.S. adults now say religion is “very important” in their lives, 4 points lower than the 2020 NPORS and substantially lower than all of the Center’s earlier RDD readings on this question.

This analysis compares results from surveys conducted using different “modes” of data collection. Estimates from 2009-2019 are based on random-digit-dial (RDD) telephone surveys, an interviewer-administered mode in which a live person asks questions over the phone. Estimates from 2020 and 2021 are based on surveys conducted online and by mail among respondents recruited via address-based sampling, a self-administered mode in which the respondent answers questions in writing, either on paper or online.

Other key findings from the 2021 NPORS include: