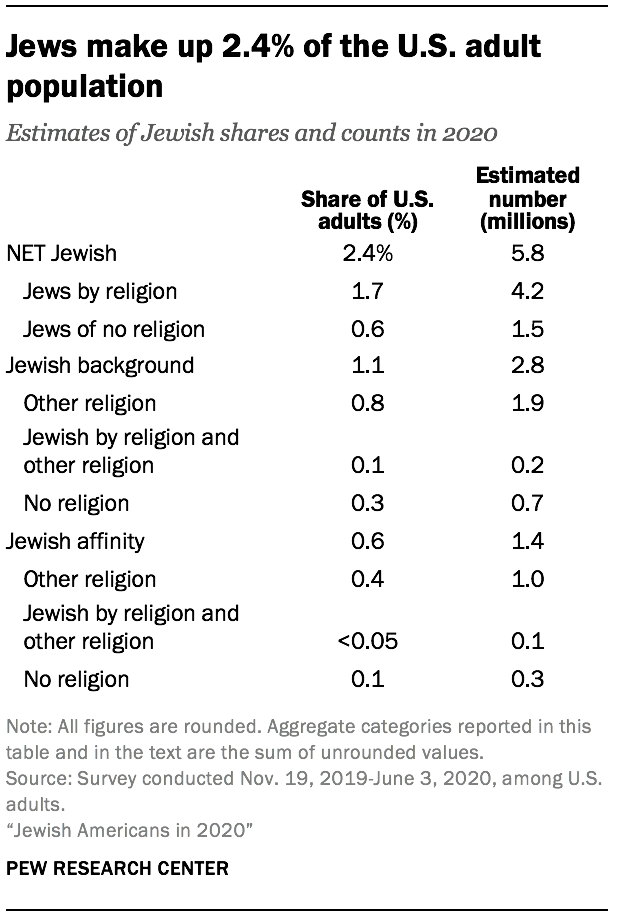 This report classifies approximately 5.8 million adults (2.4% of all U.S. adults) as Jewish. This includes 4.2 million (1.7%) who identify as Jewish by religion and 1.5 million Jews of no religion (0.6%).17 People are categorized as “Jews of no religion” if they answer a question about their present religion by saying they are atheist, agnostic or have no religion in particular; and they say they had a Jewish parent or were raised Jewish; andthey consider themselves Jewish in some way aside from religion, such as ethnically, culturally or because of their family background.

An additional 2.8 million adults (1.1% of U.S. adults) have a Jewish background. These adults all had at least one Jewish parent or a Jewish upbringing, but most people in this category, 1.9 million, identify with another religion, such as Christianity. About 700,000 have no religion and do not consider themselves Jewish in any way. An additional 200,000 identify as Jewish by religion but also identify with another religion, which excludes them from the Jewish population for the purposes of this report. 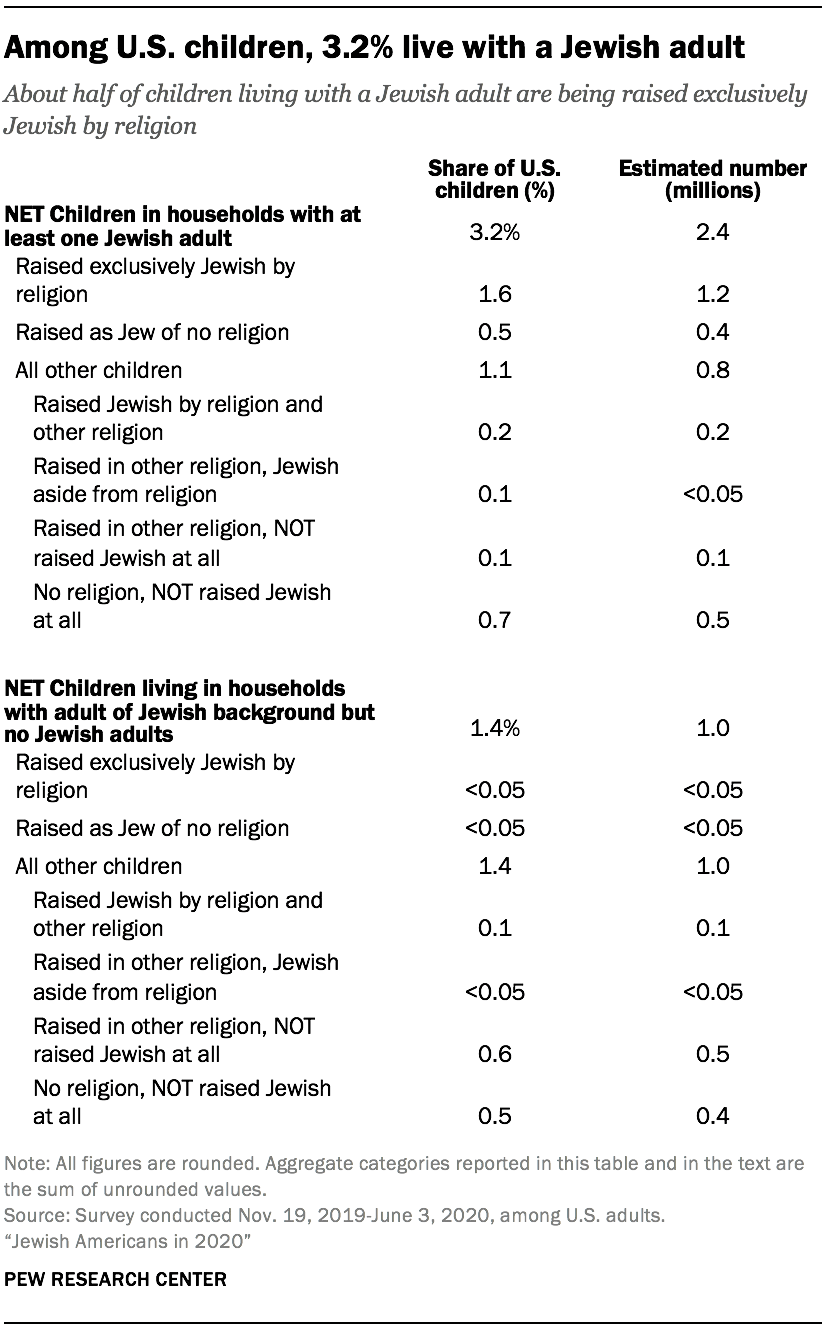 Meanwhile, approximately 1 million children live in households without any Jewish adults but with at least one adult of Jewish background, although 900,000 of these children are not being raised Jewish in any way.

Combining 5.8 million adult Jews (the estimated size of the net Jewish population in this survey) with 1.8 million children (living in households with a Jewish adult and who are being raised Jewish in some way, including those who are being raised both Jewish and in another religion) yields a total estimate (rounded to the nearest 100,000) of 7.5 million Jews of all ages in the United States, or 2.4% of the total U.S. population.19

Of course, the population estimates could be larger or smaller depending on one’s definition of who counts as Jewish. For example, if adults with a Jewish background who identify religiously both as Jewish and as followers of another religion (such as Christianity) were included in the Jewish population, it would rise to approximately 7.7 million. And if children who are being raised both as Jewish and in another religion were excluded from the Jewish population estimate, it would fall to about 7.3 million.

Using data from the 2020 Pew Research Center survey, Hebrew University demographer Sergio DellaPergola estimates the “core” Jewish population in the United States to be slightly more than 6 million, including 4.8 million adults and 1.2 million children. DellaPergola includes Jews of no religion in these figures only if they have two Jewish parents. In his view, this “core” population is more consistent with the population estimates in previous national studies going back to 1970. It is about 300,000 larger than his calculation of the “core” population in the 2013 survey, which totaled 5.7 million.20

One other common definition should be mentioned: In traditional Jewish law (halakha), Jewish identity is transmitted by matrilineal descent. The survey finds that 87% of adult Jews by religion and 70% of Jews of no religion – a total of about 4.8 million U.S. adults – say they had a Jewish mother. Additionally, about 1.3 million people who are not classified as Jews in this report (47% of non-Jews of Jewish background) say they had a Jewish mother.

Is the Jewish share of the U.S. population stable, growing or shrinking?

However, the 2020 survey points to a larger population of children living in Jewish households than its predecessor (2.4 million in 2020 vs. 1.8 million in 2013). In 2013, the estimated share of U.S. adults who were Jewish (2.2%) was similar to the share of children in the United States who were living with at least one Jewish adult (2.4%). In 2020, however, the estimated share of all U.S. children who live with at least one Jewish adult (3.2%) exceeds the estimated percentage of Jews in the U.S. adult population (2.4%).

The difference in the estimated size of the child population probably reflects in part some real change, fueled by factors including the high concentration of Orthodox Jews among young adults of childbearing age and their high fertility rates, leading to more Jewish children. But some of this difference may be attributable to measurement artifacts associated with the 2013 and 2020 surveys and their different modes of data collection. Surveys were completed on the phone in 2013 and either by mail or online in 2020.

Pew Research Center values transparency and humility. This is the first nationally representative study of U.S. Jews using address-based sampling (ABS) techniques. Additional studies using this method and future work by other scholars will increase our understanding of these results.

How do these estimates compare with other estimates?

Each year, the American Jewish Year Book publishes new estimates of the size of the U.S. Jewish population of all ages. One estimate comes annually in a chapter on the demographics of American Jews by the yearbook’s editors, Ira M. Sheskin of the University of Miami and Arnold Dashefsky of the University of Connecticut. By aggregating data from local Jewish community studies, key informants at Jewish Federations in larger communities, and rabbis and other Jewish community leaders in smaller communities, along with census data on heavily Jewish counties, Sheskin and Dashefsky estimate there were 7.15 million U.S. Jews in 2020. Sheskin and Dashefsky rely on the varying definitions of Jewish identity used by their diverse sources.

A second set of U.S. Jewish population estimates is produced and updated regularly by the American Jewish Population Project (AJPP), led by Leonard Saxe and Elizabeth Tighe at Brandeis University’s Steinhardt Social Research Institute. The Brandeis team does multilevel Bayesian analysis of a large number of general population surveys measuring the Jewish-by-religion population, which they combine with analyses of local Jewish community surveys and the 2013 Pew Research Center survey to estimate the number of adults who are Jewish aside from religion and the number of children in the Jewish population. See their technical report for additional details. The AJPP estimates there were 7.6 million Jews of all ages in 2020, including 6.0 million Jewish adults and 1.6 million children.

A third estimate appears each year in a chapter of the American Jewish Year Book that focuses on Jewish populations around the world and is written by DellaPergola, who is professor emeritus at the Hebrew University of Jerusalem’s Avraham Harman Institute of Contemporary Jewry. DellaPergola considers a wide range of sources and demographic factors to produce his estimates for each country. To make U.S. estimates, he has relied primarily in recent years on analysis of the 2013 Pew Research Center survey. In addition to estimating the size of a “core” Jewish population, he also looks at a broader, “Jewish connected” population that includes adults who identify as partially Jewish, children raised in both Judaism and another religion, and people who say they are not Jewish but who have at least one Jewish parent. As of 2019, DellaPergola estimated the “Jewish connected” population in the United States at about 8 million.

The 2020 Pew Research Center estimate of 7.5 million Jews of all ages roughly matches the current AJPP total. The Center’s estimate is close to Sheskin and Dashefsky’s aggregate estimate, and it falls between DellaPergola’s estimates of the “core Jewish” and “Jewish connected” populations. To those unaccustomed to thinking about Jewish population measurement and trends, the differences between all these estimates may appear modest. To survey researchers aware of the limits of surveys to provide precise data on rare populations, focusing on such small variations may seem unwarranted. And yet, the measure one chooses matters for whether the U.S. is considered to have the largest Jewish population in the world or the second largest, after Israel’s Jewish population of approximately 6.8 million on the eve of 2020.

In addition, Jews may be particularly attuned to the importance of population trends because of the murder of approximately 6 million Jews, or roughly two-thirds of Europe’s entire Jewish population, in the Holocaust. Depending on one’s estimate of the number of Jews living in the U.S. today, the total Jewish population around the world may – or may not – have returned to its pre-Holocaust level (approximately 17 million in 1939). Finally, many Jewish organizations depend on population estimates at both the national and local level in planning programs and assessing their effectiveness at serving U.S. Jewish communities.

Next: 2. Jewish identity and belief
← Prev Page
Page1You are reading page2Page3Page4Page5Page6Page7Page8Page9Page10
Next Page →

Jewish Americans in 2020
1. The size of the U.S. Jewish population
Is the Jewish share of the U.S. population stable, growing or shrinking?How do these estimates compare with other estimates?
2. Jewish identity and belief 3. Jewish practices and customs 4. Marriage, families and children 5. Jewish community and connectedness 6. Anti-Semitism and Jewish views on discrimination 7. U.S. Jews’ connections with and attitudes toward Israel 8. U.S. Jews’ political views 9. Race, ethnicity, heritage and immigration among U.S. Jews 10. Jewish demographics 11. Economics and well-being among U.S. Jews 12. People of Jewish background and Jewish affinity Acknowledgments Appendix A: Survey methodology Appendix B: Mode experiment