Pew Research Center conducted this survey to help understand how the coronavirus outbreak has impacted the worship habits of Americans. For this report, we surveyed 10,211 U.S. adults from July 13 to 19, 2020. All respondents to the survey are part of Pew Research Center’s American Trends Panel (ATP), an online survey panel that is recruited through national random sampling of residential addresses. This way nearly all U.S. adults have a chance of selection. The survey is weighted to be representative of the U.S. adult population by gender, race, ethnicity, partisan affiliation, education and other categories. For more, see the ATP’s methodology and the methodology for this report.

The questions used in this report can be found here and here.

A new Pew Research Center survey finds that U.S. adults overwhelmingly say houses of worship should be required to follow the same rules about social distancing and large gatherings as other organizations or businesses in their local area. About eight-in-ten Americans (79%) take this position, four times the share who think houses of worship should be allowed more flexibility than other kinds of establishments when it comes to rules about social distancing (19%).

On this question, Americans seem to align with two recent Supreme Court orders, which rejected lawsuits claiming that state restrictions on worship violated the First Amendment’s guarantee of religious freedom. At the same time, many state and local governments have carved out exemptions for religious institutions from pandemic-related restrictions.

Among U.S. Christians, about three-quarters say churches should be subject to the same rules as other businesses. Evangelical Protestants express the most support for giving houses of worship more flexibility, but even in this group, a 62% majority says houses of worship should be held to the same standards as other businesses and organizations (see Chapter 1 for more details). And while Democrats and those who lean toward the Democratic Party are substantially more likely than Republicans and Republican leaners to say houses of worship should be required to follow the same social distancing rules as other organizations, a two-thirds majority of Republicans also express this view. 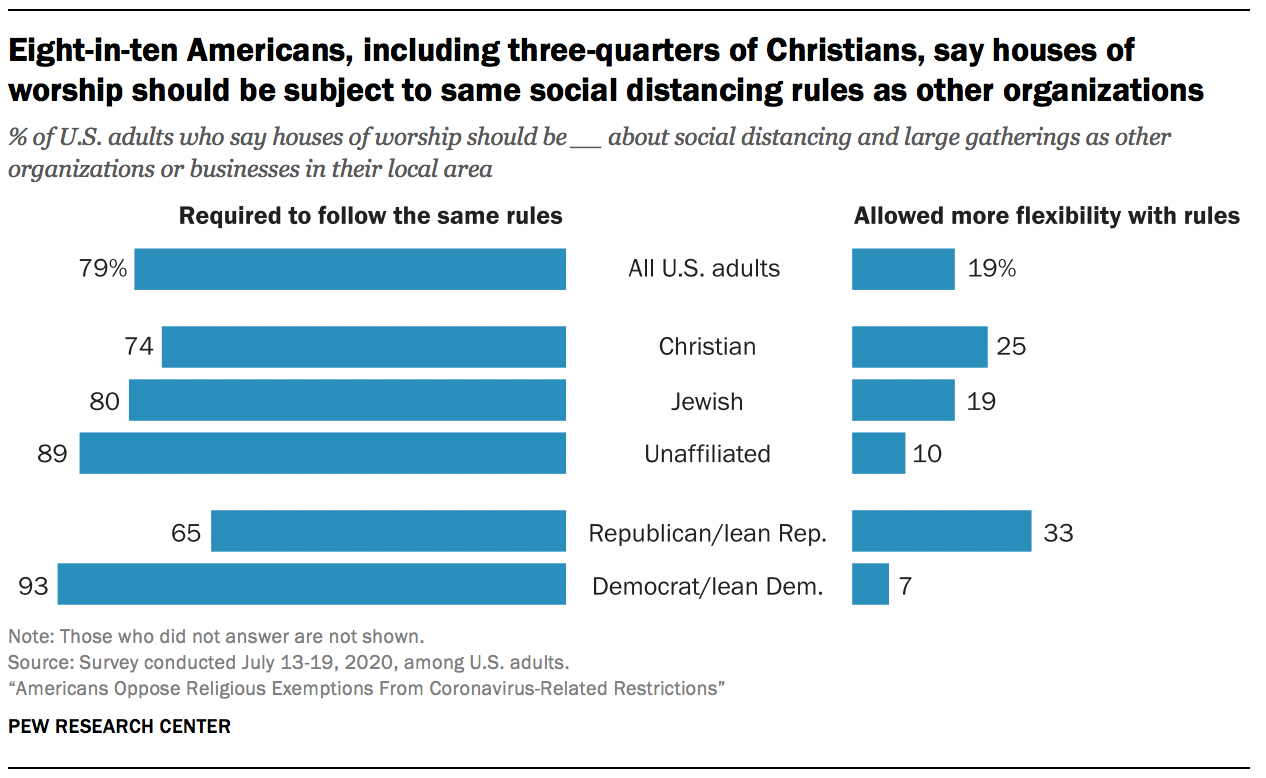 In addition, amid reports that some clusters of the virus have been tied to religious gatherings, many Americans who regularly attend religious services express support for instituting a variety of restrictions and modifications at their own places of worship. At the time the survey was conducted (July 13 to 19), only 13% said their house of worship should be open to the public just as it was before the outbreak.1 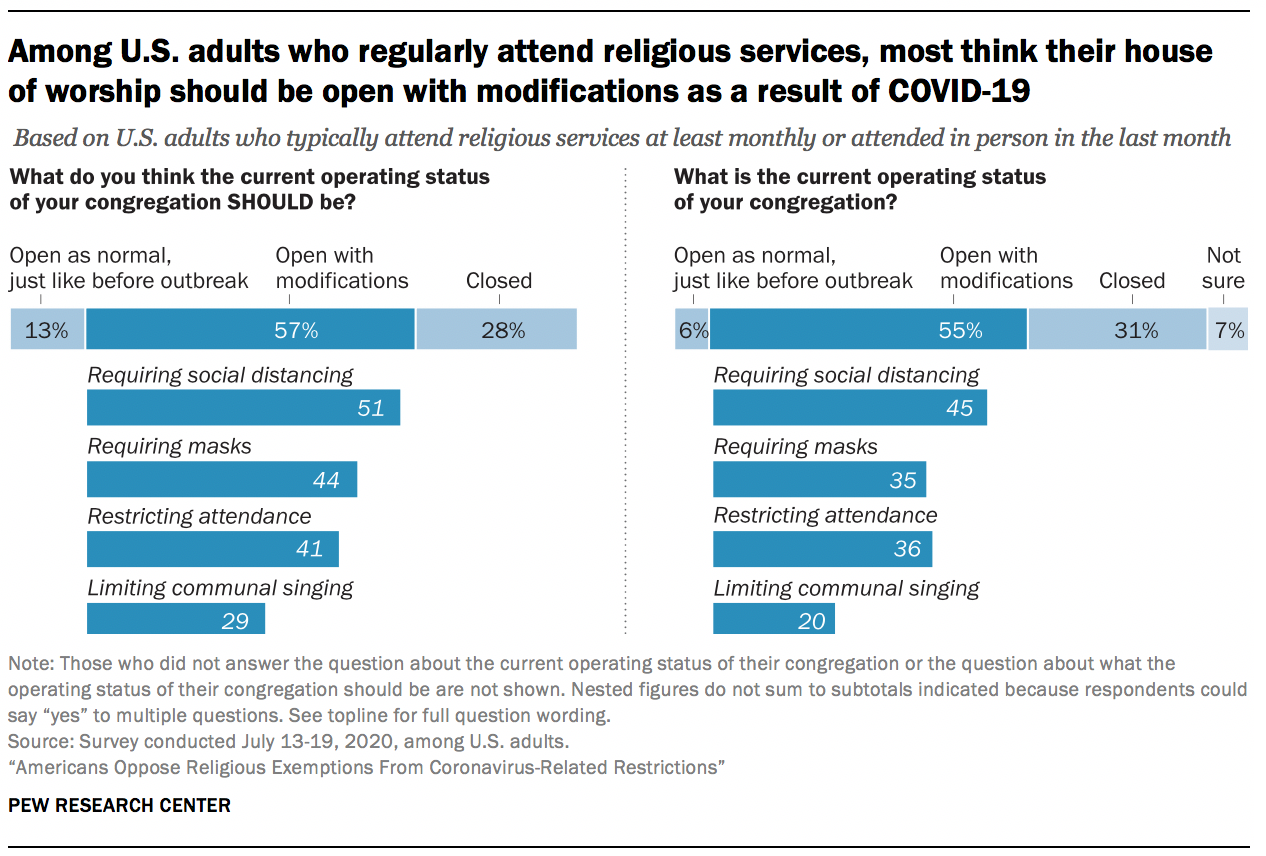 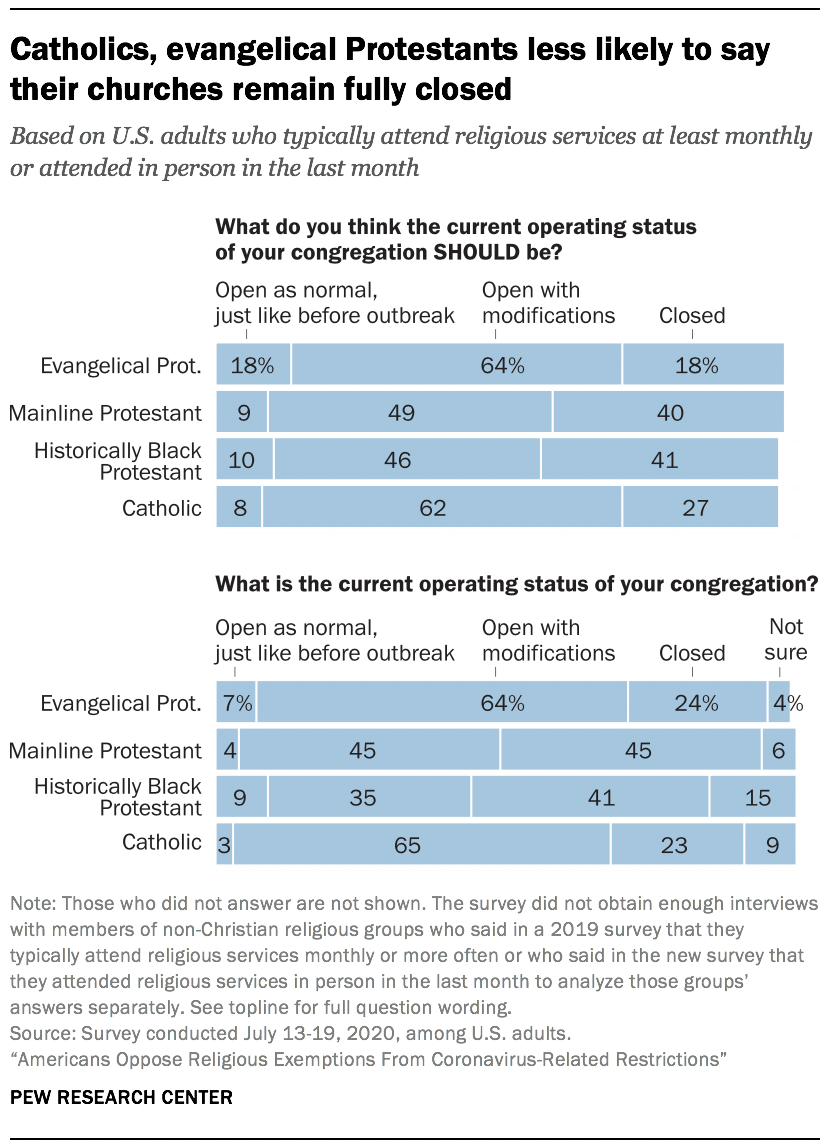 More than eight-in-ten attenders think their own congregation should either be closed altogether (28%) or open only on a modified basis (57%), with this latter group broadly endorsing precautions such as requiring people to stay 6 feet away from each other (51%), requiring masks (44%), limiting the number of people in attendance at any one time (41%) and limiting communal singing (29%).

These figures are largely in line with what religious attenders say is actually going on at their congregations. Just 6% say their congregation is open to the public in the same way it was before the coronavirus outbreak. A majority (55%) say that the house of worship they attend most often is open to the public for religious services on a modified basis as a result of the coronavirus outbreak, while three-in-ten (31%) say their house of worship is closed altogether.

Meanwhile, the vast majority of religious attenders (79%) say their house of worship is streaming or recording its religious services so people can watch online or on TV.

Among those who attend religious services, mainline Protestants and members of the historically Black Protestant tradition are more likely than Catholics and evangelical Protestants to say they think their congregations should be closed. Most Catholics and evangelicals think their churches should be open, albeit with restrictions in place (see Chapter 1 for details). Similar patterns are reflected in the current operating status of churches across these Christian traditions. (The survey included too few interviews with members of other religious groups who attend services regularly to permit separate analysis of their answers to these questions.) 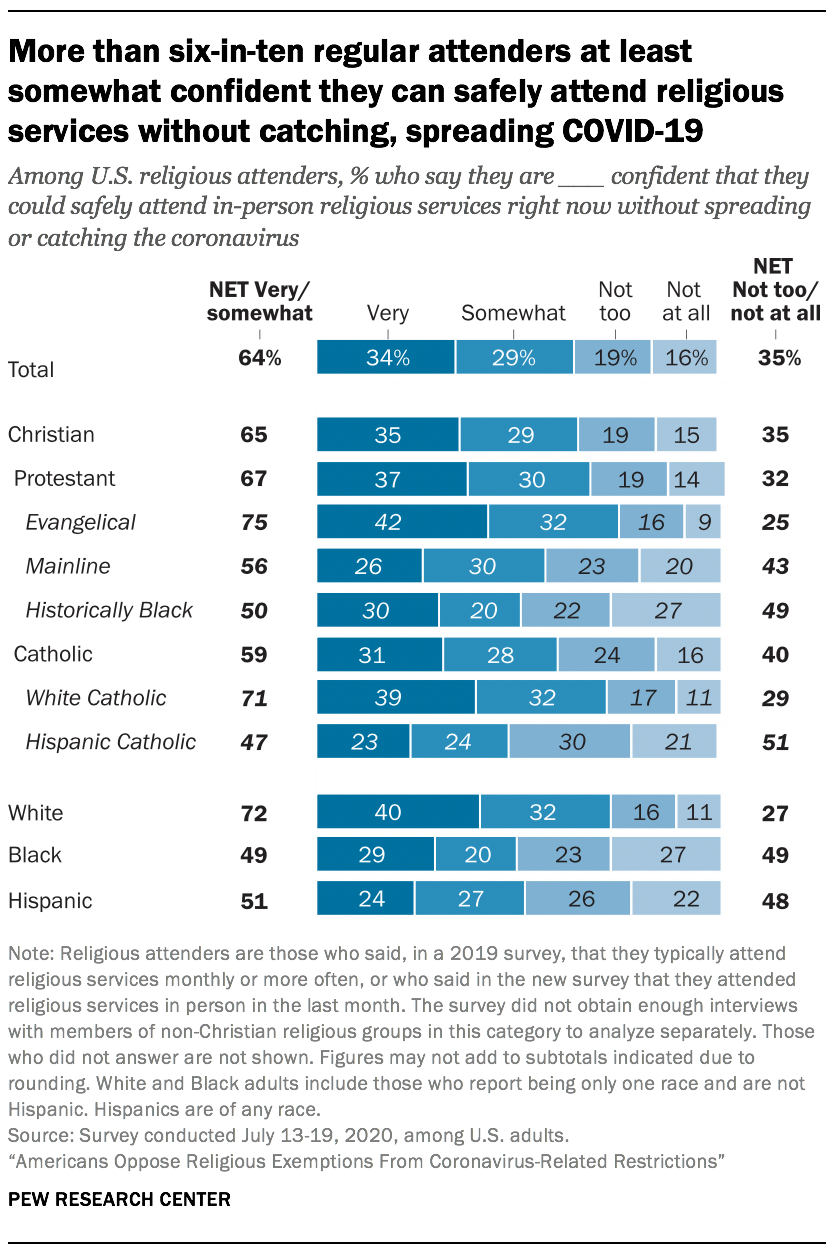 Majorities of regularly attending evangelical Protestants (75%) and Catholics (59%), along with 56% of mainline Protestants, say they feel safe attending church right now. Protestants in the historically Black tradition and Hispanic Catholics, meanwhile, are more evenly divided between those who are confident it is safe to return to in-person services and those who are not.

The survey also finds broader racial and ethnic divisions on these and many other coronavirus-related questions. While nearly three-quarters of white Americans say they are confident they could safely attend in-person religious services right now, far fewer Black (49%) and Hispanic (51%) adults say the same. A previous Pew Research Center survey found that health concerns about the coronavirus outbreak are much higher among Black and Hispanic adults than among white adults, and the Centers for Disease Control and Prevention has reported that people from racial and ethnic minority groups are at increased risk of getting sick and dying from COVID-19.

But while the survey suggests that many people would feel comfortable going, far fewer Americans – 12% of U.S. adults overall – say they actually have gone to services in person in the last month (meaning the month preceding the survey, which was conducted in mid-July). Even among those who say they attend services at least monthly in more normal times, just one-third report that they attended in person during the month preceding the survey, but a far larger share (72%) say they have watched religious services online or on TV in the last month.2 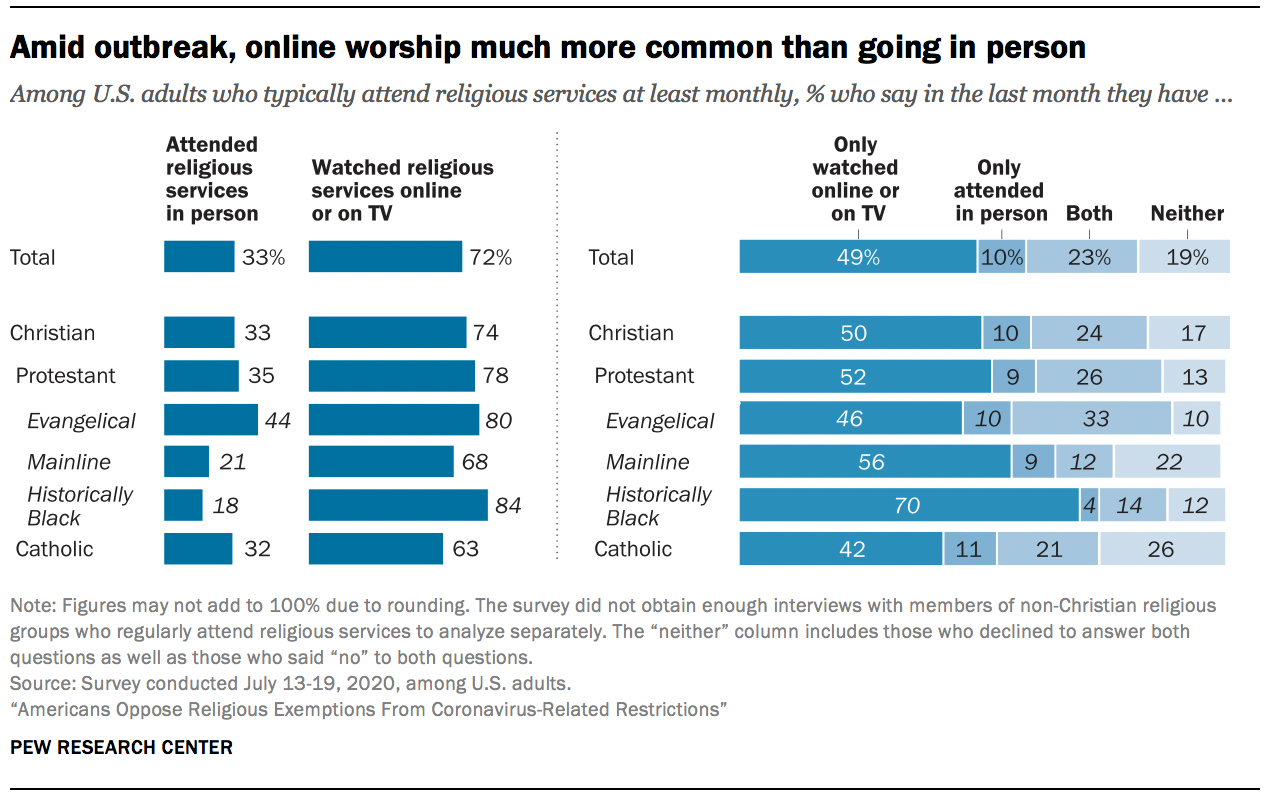 Evangelical Protestants are more likely than members of other Christian traditions to say they recently have attended in-person religious services. But still, among evangelicals who typically attend, fewer than half (44%) say they have gone recently, while far more (80%) are watching services virtually.

These are among the key findings of a new Pew Research Center survey conducted July 13 to 19, 2020, among 10,211 U.S. adults on the Center’s online, nationally representative American Trends Panel. For more information on how the survey was conducted, see the Methodology. 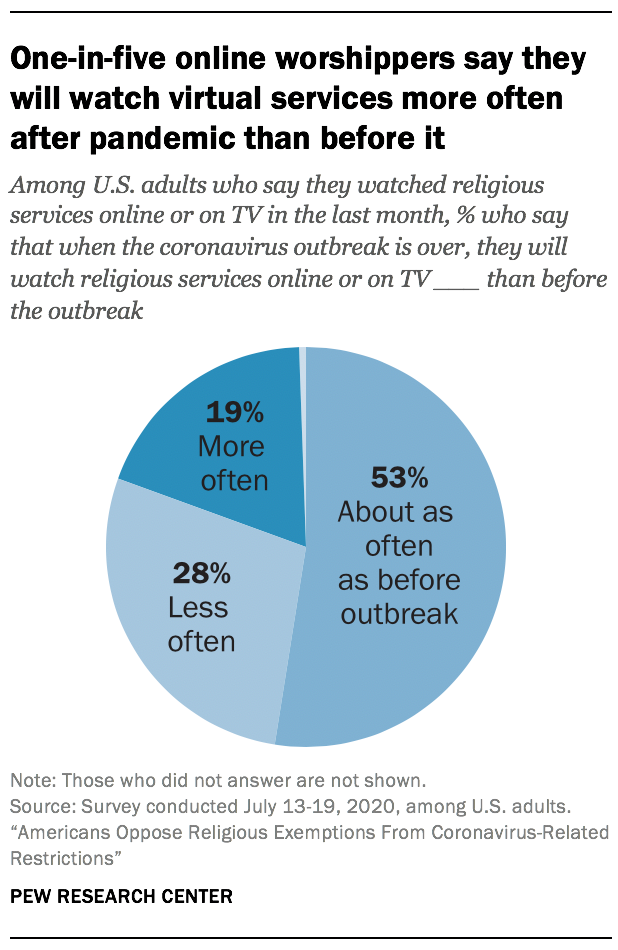 Plans to attend religious services more frequently after the pandemic has passed are concentrated among those who attended regularly (at least once a month) to begin with. Among those who did not regularly attend religious services prior to the pandemic, the vast majority indicate that their attendance habits will not change, largely because they did not attend before the outbreak.

The coronavirus outbreak also does not seem primed to usher in a permanent rise in virtual worship. In fact, among U.S. adults who recently watched religious services online or on TV, a larger share say that they intend to watch virtual services less often (28%) rather than more often (19%) after the pandemic passes. About half (53%) say they will watch services online at about the same rate as they did before the pandemic.

Most U.S. adults who recently watched religious services online are satisfied with services

Still, the vast majority of U.S. adults who have watched religious services online or on TV in the last month say they are “very” (54%) or “somewhat” (37%) satisfied with the services they have watched, while just 8% say they are “not too” or “not at all” satisfied.

While most regular attenders say their house of worship is putting its religious services online, the new survey also finds that Americans who are watching services online are not solely watching their own congregations.

While virtual worship has been a new experience for many Americans during the pandemic, nearly half of those who watched religious services online or on TV in the last month (46%) say they also had done so before the outbreak. 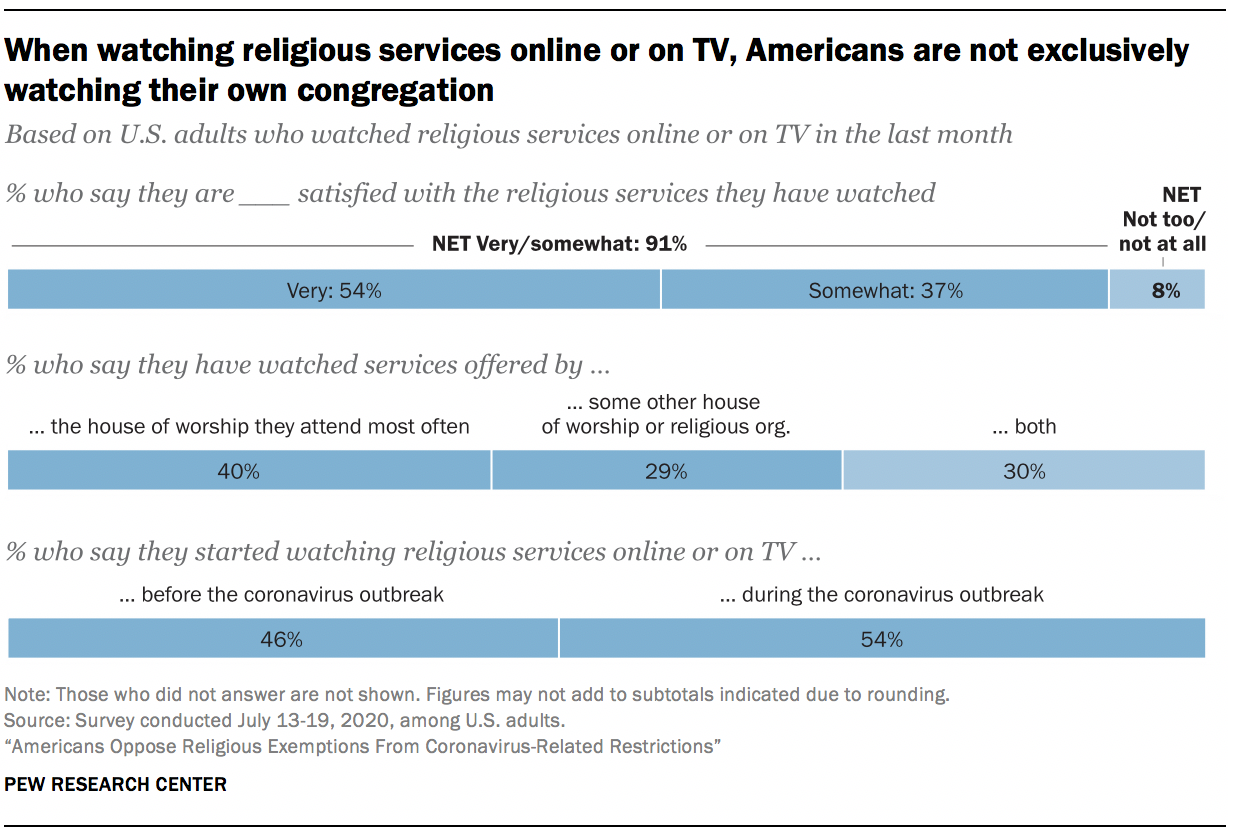 Whether hearing sermons in person or online, many have heard about importance of taking steps to limit the virus’ spread, support for Black Lives Matter protests, importance of voting

During a year of great upheaval in the U.S., what are Americans hearing from religious leaders? Three-quarters of U.S. adults who recently attended religious services in person or watched online say that in the past few months they have heard sermons that have expressed the importance of taking steps to limit the spread of the coronavirus. At the same time, about three-in-ten have heard opposition from religious leaders to government orders that prevented houses of worship from holding in-person religious services. 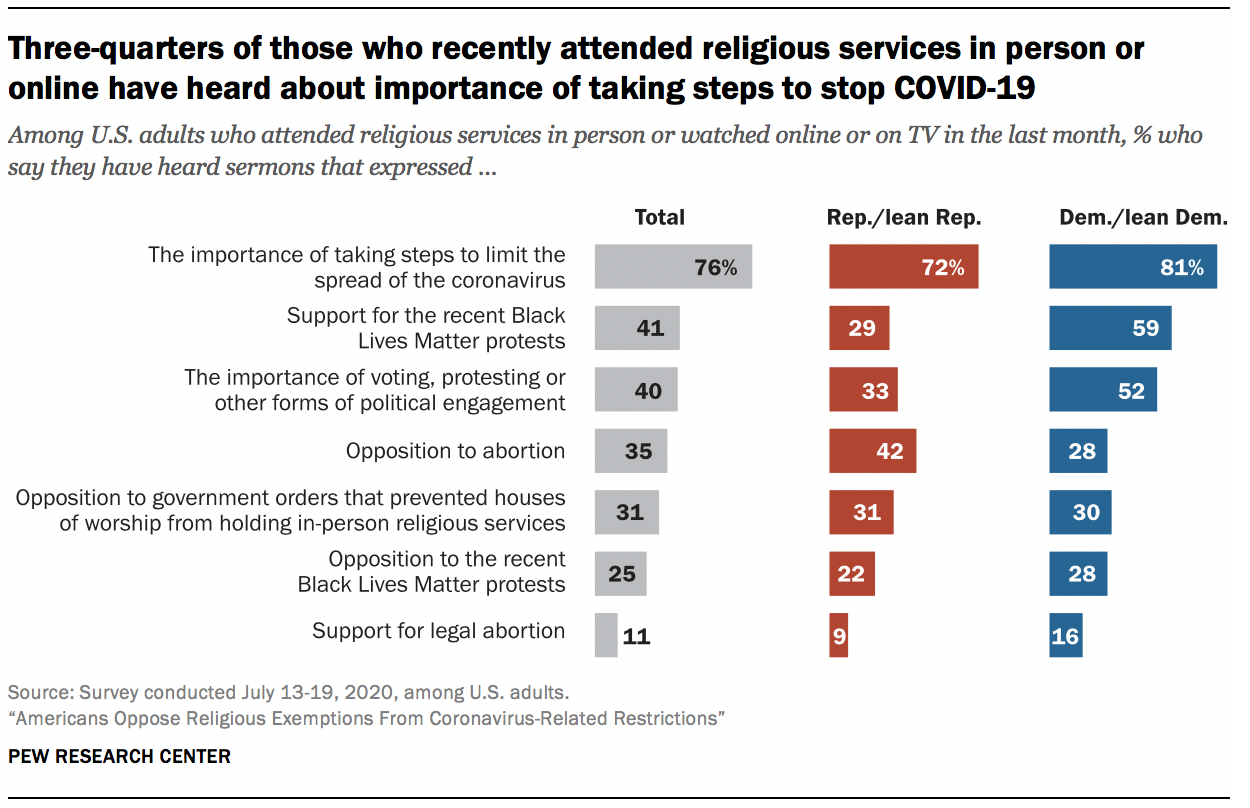 In the wake of George Floyd’s killing by police in Minneapolis, about four-in-ten U.S. adults who have recently watched or attended religious services say they have heard sermons that have expressed support for the recent Black Lives Matter protests, while a quarter have heard opposition to the protests. And with a presidential election looming, four-in-ten say they have heard from clergy about the importance of voting, protesting or other forms of political engagement.

Houses of worship also continue to express their views on abortion. About one-third of Americans who have watched or attended services in the last month say they heard sermons that have expressed opposition to abortion (35%), while one-in-ten (11%) heard support for legal abortion.

Judging by their answers to the survey, Democrats and Republicans are not hearing all of the same messages at their congregations. For instance, Democrats and those who lean Democratic are substantially more likely than Republicans and adults who lean toward the GOP to say they have heard sermons that expressed support for the recent Black Lives Matter protests (59% vs. 29%) and the importance of voting (52% vs. 33%). And more Republicans than Democrats say they have heard sermons that express opposition to abortion in the past few months (42% vs. 28%). 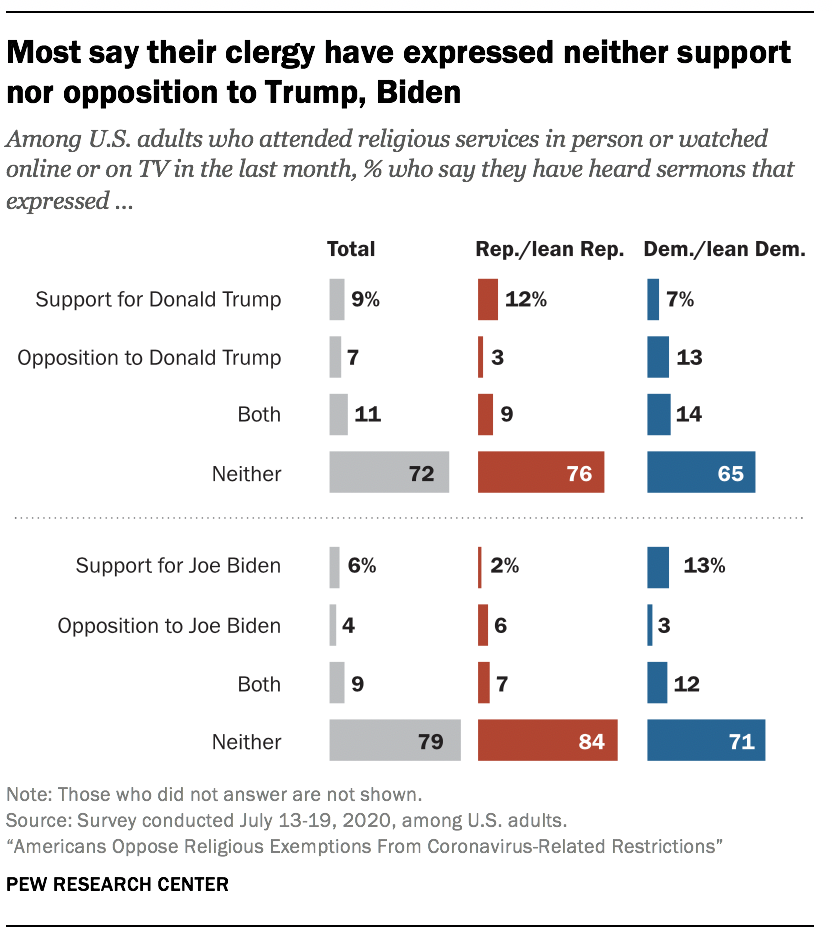 While many people who attend religious services say they have heard about social and political issues in sermons recently, fewer say they have heard much positive or negative talk about President Donald Trump or former Vice President Joe Biden, the presumptive Democratic nominee. The vast majority of Americans who have engaged with religious services recently say they haven’t heard either support for, or opposition to, Trump (72%), and 79% haven’t heard either sentiment about Biden.

Many religious leaders may avoid discussing the candidates directly due to restrictions on involvement in political campaigns by tax-exempt organizations, including religious institutions.

Next: 1. Attending and watching religious services in the age of the coronavirus
← Prev Page
You are reading page1Page2Page3Page4Page5Page6
Next Page →

Americans Oppose Religious Exemptions From Coronavirus-Related Restrictions
1. Attending and watching religious services in the age of the coronavirus 2. U.S. adults regularly turn to a variety of activities to help cope with coronavirus outbreak 3. Online or in person, many Americans have heard sermons addressing timely political and social events Acknowledgments Methodology