By two standard measures of religious observance – how often people pray and how often they attend religious services – Central and Eastern Europeans, on the whole, show modest levels of religious commitment. In none of the countries surveyed do a majority of respondents say they pray daily or attend worship services weekly. In some other regions of the world, such as Latin America, these regular religious practices are far more widespread.

But this does not mean religion is irrelevant to the lives of people in Central and Eastern Europe. Majorities in several countries surveyed say they take Communion and fast to observe holidays or holy periods such as Lent. Catholic respondents are more likely than Orthodox ones to say they do these things, just as they are more likely to say they attend church regularly.

In addition, a few other customs are widespread across the region, including lighting a candle when visiting a church, keeping icons or other holy figures in the home, and wearing a cross or other religious symbols. Orthodox Christians are more likely than Catholics to do these things, though majorities of both groups in nearly all countries surveyed say they have icons or other holy figures in their homes.

Baptism also is common. Nearly all Christian adults in most countries surveyed, and even sizable shares of religiously unaffiliated people in the region, say they have been baptized.

The rest of this chapter explores data on religious practices in the region in more detail, including the religious upbringing of children; whether adults consult traditional religious healers, tarot cards or horoscopes; and the frequency with which people in Central and Eastern Europe say they think about the meaning and purpose of life. 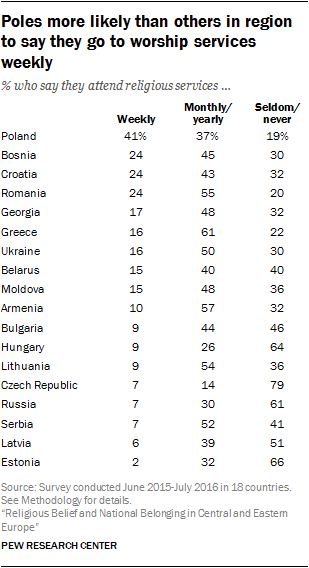 In the vast majority of countries surveyed, no more than a quarter of respondents say they attend services weekly or more often; in nine of these 18 countries, roughly one-in-ten or fewer say this. Poland is the one standout; 41% of Polish adults say they attend church at least weekly.

In three of the four countries where enough Muslims were surveyed to permit analysis, Muslims are more likely to go to mosque weekly than Christians are to attend church that often. Still, the percentages of Muslims who are weekly attendees are relatively low compared with Muslims in many other parts of the world (see related sidebar). 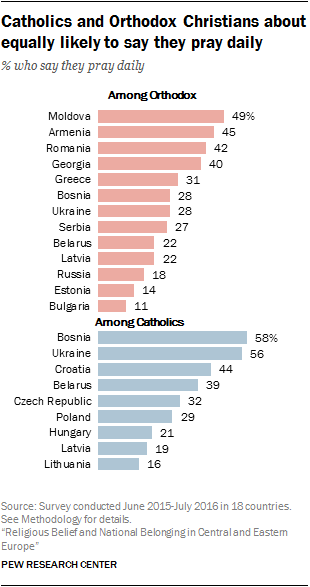 Daily prayer is more common than weekly church attendance in the region. Still, in most countries surveyed, fewer than a third of adults say they pray daily, and four-in-ten or more say they pray monthly or less often. 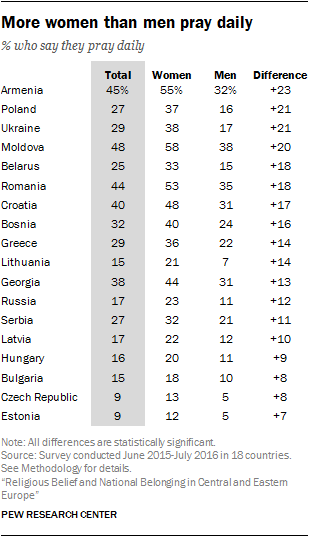 Muslim respondents were asked whether they pray all five salah – Islamic prayers – daily. The duty to make these five prayers each day is one of the five Pillars of Islam and is traditionally viewed as obligatory for Muslims.

Across the region, women are more likely than men to say they pray daily. This finding is in line with survey results among Christians elsewhere around the world that indicate higher levels of religious observance among women than among men.

On balance, across the region, taking Communion is the most common of these three rituals for members of both religious traditions. Medians of 64% of Catholics and 38% of Orthodox Christians in the region say they sometimes or often take Communion, compared with 54% and 27%, respectively, who fast during Lent. Tithing is less widespread; a quarter or fewer of Catholics and Orthodox Christians in most countries say they tithe.

Across the region, women are more likely than men to say they fast or take Communion. There are minimal differences between men and women when it comes to tithing.

Among the four countries with significant Muslim populations, only in Bosnia (66%) and Russia (55%) do majorities or pluralities of adults report fasting during the Muslim holy month of Ramadan. About half of Muslims in Georgia (48%) and 36% in Bulgaria say they fast during Ramadan. Most Muslims in Bosnia (72%) and Georgia (61%) say they give zakat – that is, an annual donation of a portion of their wealth to the needy – while fewer in Russia (45%) and Bulgaria (26%) give zakat.

Similarly, fewer than half of adults in all countries surveyed say they frequently share their faith or views on God with others. (In Russia, where 16% of adults say they share their faith at least once a month, doing so in public may be a violation of a 2016 law against proselytization.)

Majorities of respondents across most countries surveyed say they have icons or other holy figures in their homes, and that they light a candle when they visit a church. And in several countries, most people report wearing or carrying religious symbols (for example, a necklace with a cross).24

Having icons (religious images), is especially common in the region. Orthodox Christians and Catholics are about equally likely to say they have icons or other holy figures in their home; in nearly every country surveyed, at least seven-in-ten from both groups say they have these religious articles.

Religiously unaffiliated adults are less likely than Catholics and Orthodox Christians to have icons, light candles in churches or wear religious symbols. But some religious “nones” do partake in these religious practices; for example, about a third of religiously unaffiliated adults in both Russia and Ukraine say they have icons or other holy figures in their home. And about one-in-ten religious “nones” in the Czech Republic (10%) and Russia (14%) say they wear religious symbols.

Baptism is perhaps the most widespread religious practice in the region. In nearly every country surveyed, large majorities of Christian adults – including roughly similar shares of both Catholics and Orthodox Christians – say they have been baptized.

In several countries – especially those with large unaffiliated populations, such as the Czech Republic, Estonia, Hungary and Latvia – adults ages 50 and older are more likely than younger people to have been baptized. 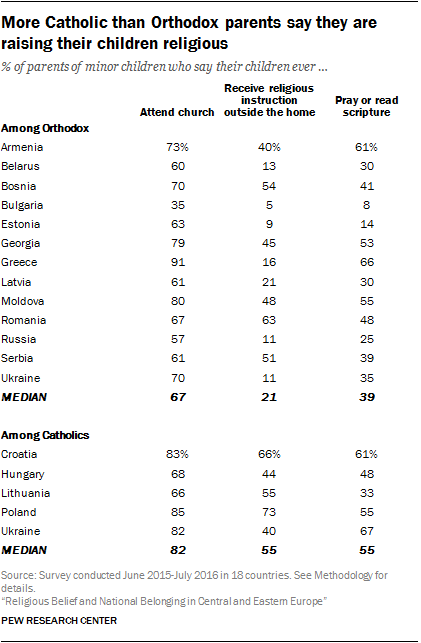 While most parents of minor children say they are raising those children in the same religious tradition as their own (see Chapter 1), not all religiously affiliated parents incorporate religious activities into their children’s upbringing.

In Russia and Ukraine – the two most populous countries surveyed – just 11% of Orthodox Christians say their children ever receive religious instruction outside the home.25

Overall, Catholic parents are more likely than Orthodox ones to say their children ever attend church, pray or receive religious instruction outside the home.

On balance, fewer than a quarter of Catholics, Orthodox
consult horoscopes or use traditional healers

The survey also asked respondents about some behaviors that, while not always associated with Christianity or other Abrahamic religions, are connected with spirituality in some way. Across Central and Eastern Europe, between 10% and one-third of both Orthodox Christians and Catholics report that they consult horoscopes, tarot cards or fortune tellers. And roughly similar shares say they use traditional religious healers when they or their relatives are sick.

While religiously unaffiliated adults are less likely than Catholics or Orthodox Christians to say they use traditional religious healers, the three groups are about equally likely across the region to say they consult horoscopes or use fortune tellers.

In the four countries with significant Muslim populations, large majorities of Muslims also say they do not partake in these behaviors, while about a quarter or fewer do. In Russia, for example, 25% of Muslims say they use traditional healers, while 12% say they consult horoscopes, tarot cards or fortune tellers.

In nearly all countries surveyed, women are more likely than men to consult horoscopes. In Hungary, for example, women are more than twice as likely as men to do this. But women and men are about equally likely to say they or their families use traditional religious healers.

Fewer than half in most countries say they often feel connection with Earth, nature 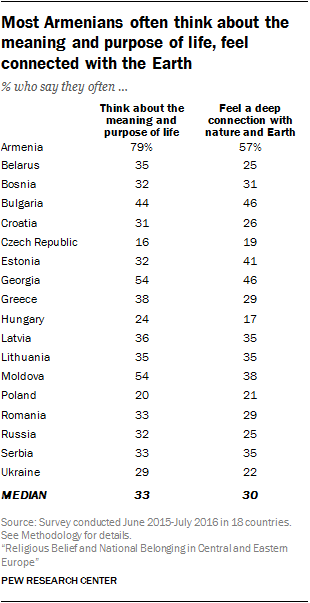 In an effort to gauge the extent to which people reflect on spiritual issues, the survey asked respondents how frequently, if at all, they think about the meaning and purpose of life, and how often they feel a deep connection with nature and the Earth. A median of 33% of adults across the 18 countries surveyed say they often think about the meaning of life, while a median of 30% report often feeling a deep connection with nature.

Czech and Hungarian respondents are among the least likely to say they reflect in this manner, with nearly half or more in both countries saying they rarely or never reflect on the meaning and purpose of life or feel a deep connection with nature and the Earth.

Adults who say religion is very important to them are considerably more likely than others to say they often think about the meaning and purpose of life, and that they often feel a deep connection with nature and the Earth.

Religious Belief and National Belonging in Central and Eastern Europe 1. Religious affiliation
2. Religious commitment and practices
Substantial shares say they seldom or never attend religious servicesHigher shares report daily prayer than weekly attendanceCatholics more likely than Orthodox Christians to take Communion, fast during LentCatholics more likely than Orthodox Christians to share faith, read scriptureMost Orthodox Christians and Catholics say they have icons or other holy figures in their homesOverwhelming majority of Christians in the region say they have been baptizedRelatively few Orthodox parents send children to religious schoolsOn balance, fewer than a quarter of Catholics, Orthodox consult horoscopes or use traditional healersFewer than half in most countries say they often feel connection with Earth, nature
3. Religious beliefs 4. Views on religion and politics 5. Social views and morality 6. Science and religion 7. Views on role of Russia in the region, and the Soviet Union 8. Democracy, nationalism and pluralism 9. Views on economic issues Acknowledgments Appendix A: Methodology