On the heels of a contentious election year in which partisan politics increasingly divided Americans, a new Pew Research Center survey finds that when it comes to religion, Americans generally express more positive feelings toward various religious groups today than they did just a few years ago. Asked to rate a variety of groups on a “feeling thermometer” ranging from 0 to 100, U.S. adults give nearly all groups warmer ratings than they did in a June 2014 Pew Research Center survey.

While Americans still feel coolest toward Muslims and atheists, mean ratings for these two groups increased from a somewhat chilly 40 and 41 degrees, respectively, to more neutral ratings of 48 and 50. Jews and Catholics continue to be among the groups that receive the warmest ratings – even warmer than in 2014.

Evangelical Christians, rated relatively warmly at 61 degrees, are the only group for which the mean rating did not change since the question was last asked in 2014. Americans’ feelings toward Mormons and Hindus have shifted from relatively neutral places on the thermometer to somewhat warmer ratings of 54 and 58, respectively. Ratings of Buddhists rose from 53 to 60. And mainline Protestants, whom respondents were not asked to rate in 2014, receive a warm rating of 65 in the new survey.

The increase in mean ratings is broad based. Warmer feelings are expressed by people in all the major religious groups analyzed, as well as by both Democrats and Republicans, men and women, and younger and older adults.

However, the mean ratings given to particular religious groups still vary widely depending on who is being asked.  For example, young adults – those ages 18 to 29 – express warmer feelings toward Muslims than older Americans do. Moreover, young adults rate all of the groups in the study within a relatively tight range, from 54 degrees for Mormons to 66 for Buddhists. By contrast, older Americans (ages 65 and older) rate some religious groups, such as mainline Protestants (75) and Jews (74), very warmly, and others, such as Muslims and atheists (44 degrees each), much more coolly. 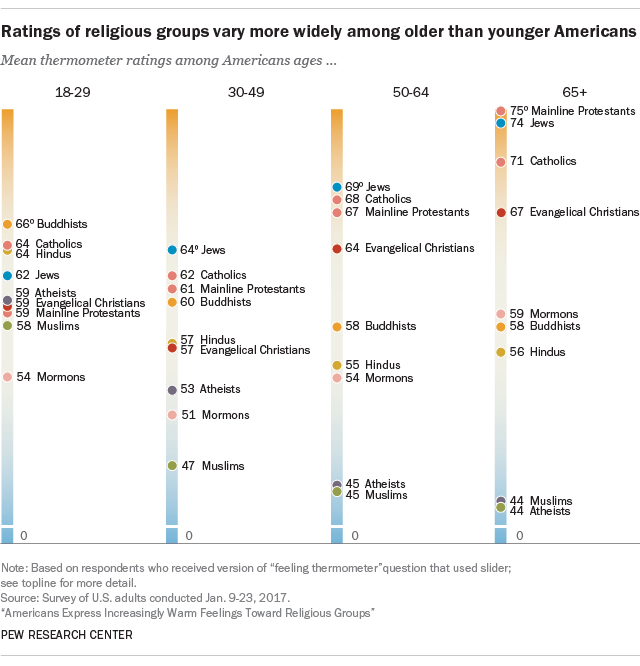 These are among the main findings of a new Pew Research Center survey of 4,248 adults conducted Jan. 9 to 23, 2017, on Pew Research Center’s nationally representative American Trends Panel. The survey also finds wide variation in the ratings that U.S. religious groups give one another. While for the most part Jews and Christians tend to rate each other warmly, atheists and evangelicals continue to view each other in a negative light. 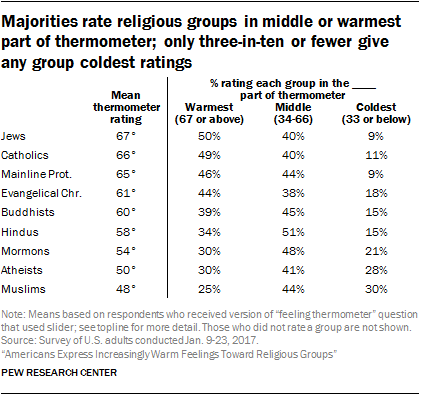 Americans express warm feelings toward Jews, with half of U.S. adults rating them at 67 degrees or higher on the 0-to-100 scale. Four-in-ten Americans rate Jews in the middle of the thermometer, between 34 and 66, and only about one-in-ten express feelings that fall at 33 degrees or cooler. These warm ratings are not significantly affected by the ratings of Jews themselves, because Jews make up just 2% of the U.S. adult population.

Just over four-in-ten Americans (44%) feel very warmly toward evangelical Christians, while 38% rate them in the middle of the thermometer and about one-in-five (18%) express cooler feelings toward this group. These ratings also include many people who consider themselves to be evangelical Christians (28% in the sample analyzed); once self-described evangelicals are excluded, a smaller share of non-evangelical U.S. adults (32%) rate evangelicals in the warmest third of the thermometer. (For more on how respondents rate religious groups other than their own, see the detailed tables that accompany this report.)

Pluralities of Americans give Buddhists, Hindus, Mormons, atheists and Muslims temperature ratings somewhere in the middle of the thermometer. Roughly equal shares rate atheists coldly (28%) as rate them warmly (30%). And slightly more Americans view Muslims in a negative light (30%) than a positive one (25%). Relatively few U.S. adults (9%) rate mainline Protestants (e.g., Episcopalians or United Methodists) coldly. The rest view this group either warmly (46%) or somewhat neutrally (44%). 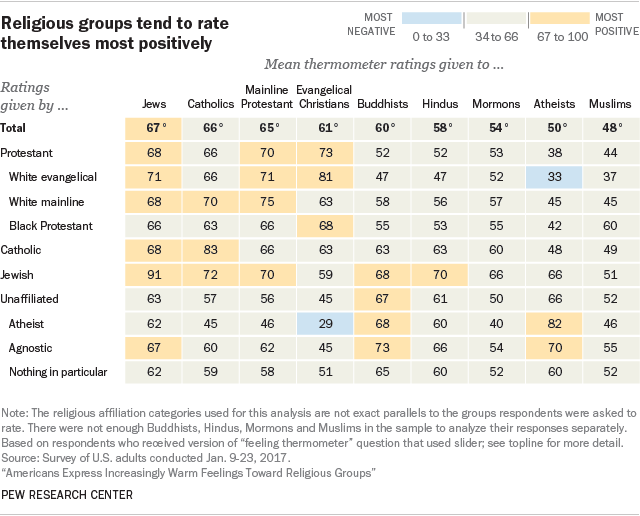 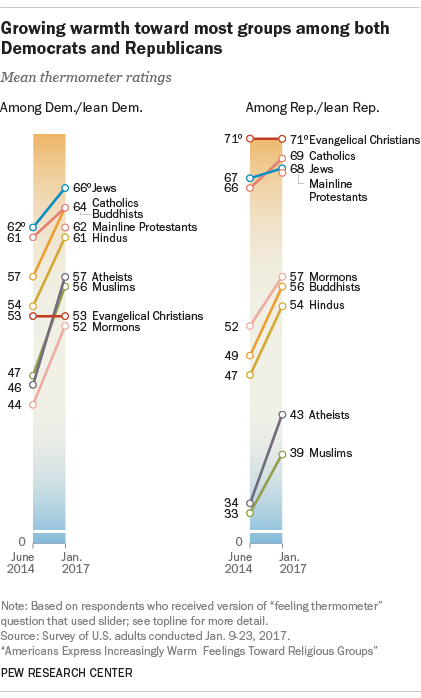 Both Democrats and Republicans now express warmer views toward a variety of groups than they did in June 2014, but large gaps remain between partisans in their views of a few of these groups. Democrats and those who lean toward the Democratic Party express somewhat warm feelings toward Muslims, giving them an average rating of 56 on the feeling thermometer, up from 47 in 2014. Republicans and those who lean Republican, meanwhile, rate Muslims at a much cooler 39 degrees, though this is up 6 degrees from 2014.

As was the case in 2014, average ratings of religious groups currently vary more widely among Republicans – ranging from 39 for Muslims to 71 for evangelical Christians – than ratings among Democrats, which range from 52 for Mormons to 66 for Jews.

Education also is associated with varying views toward religious groups. Americans with college degrees give warmer ratings to most groups compared with those who have less education. Evangelical Christians are an exception to this pattern: College-educated adults view evangelicals somewhat less warmly (average of 57) than do those who are less educated (63).

All in all, there are relatively few differences by race and ethnicity in views toward religious groups, although black Americans view Muslims warmly (62) compared with how white (46) or Hispanic (49) Americans rate Muslims. 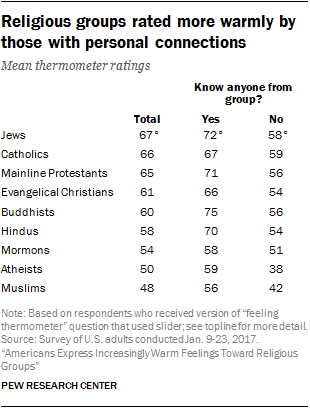 Across the board, Americans express warmer feelings toward religious groups when they are personally familiar with someone in the group, consistent with findings from the June 2014 survey. Those who do not know anyone who is Buddhist, for example, give Buddhists an average rating of 56 degrees on the feeling thermometer, compared with a much warmer 75 among those who do know a Buddhist. People who do not know atheists or Muslims rate these groups on the colder side of the scale, but those who do know someone who is an atheist or a Muslim rate these groups on the warmer side of 50. 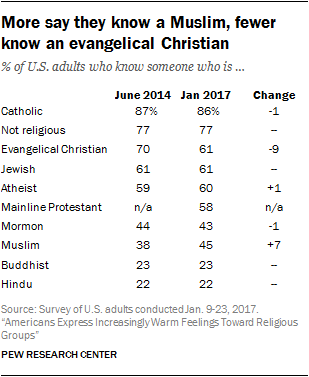 The American Trends Panel (ATP), created by Pew Research Center, is a nationally representative panel of randomly selected U.S. adults recruited from landline and cellphone random-digit-dial surveys. Panelists participate via monthly self-administered web surveys. Panelists who do not have internet access are provided with a tablet and wireless internet connection. The panel is being managed by Abt SRBI.

Data in this report are drawn from the panel wave conducted Jan. 9 to Jan. 23, 2017, among 4,248 respondents. The margin of sampling error for the full sample of 4,248 respondents is plus or minus 2.5 percentage points. The analysis of the “feeling thermometer” questions is based on the 93% of respondents who received the slider version of the question (N=3,939; see topline for details), and the margin of sampling error for this subset is plus or minus 2.6 percentage points. Sample sizes and sampling errors for other subgroups are available upon request. In addition to sampling error, one should bear in mind that question wording and practical difficulties in conducting surveys can introduce error or bias into the findings of opinion polls.

The ATP data were weighted in a multistep process that begins with a base weight incorporating the respondents’ original survey selection probability and the fact that in 2014 some panelists were subsampled for invitation to the panel. Next, an adjustment was made for the fact that the propensity to join the panel and remain an active panelist varied across different groups in the sample. The final step in the weighting uses an iterative technique that aligns the sample to population benchmarks on a number of dimensions. Gender, age, education, race, Hispanic origin and region parameters come from the U.S. Census Bureau’s 2015 American Community Survey. The county-level population density parameter (deciles) comes from the 2010 U.S. census. The telephone service benchmark comes from the January to June 2016 National Health Interview Survey and is projected to 2017. The volunteerism benchmark comes from the 2015 Current Population Survey Volunteer Supplement. The party affiliation benchmark is the average of the three most recent Pew Research Center general public telephone surveys. The internet access benchmark comes from the 2015 Pew Research Center Survey on Government. Respondents who did not previously have internet access are treated as not having internet access for weighting purposes. Sampling errors and statistical tests of significance take into account the effect of weighting. Interviews are conducted in both English and Spanish, but the Hispanic sample in the American Trends Panel is predominantly native born and English speaking.

Key findings about religion in India

In U.S., familiarity with religious groups is associated with warmer feelings toward them