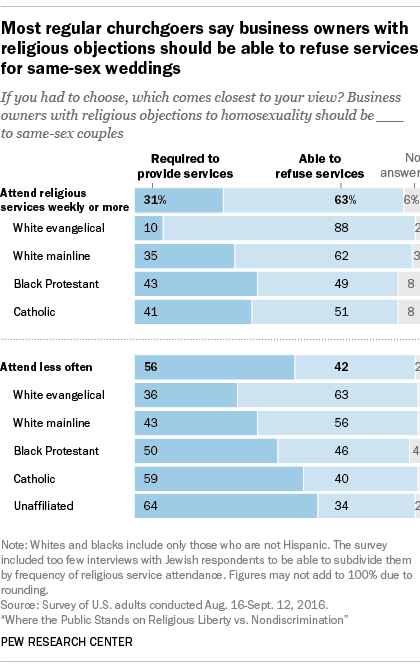 As a whole, Americans are closely divided over whether businesses that provide wedding services, such as catering or flowers, should be required to provide those services to same-sex couples as they would to any other customer (49%), or whether they should be able to refuse those services to same-sex couples if the business owner has religious objections to homosexuality (48%). But there is more of a consensus on this issue among Americans who report attending religious services on a weekly basis. Nearly two-thirds of frequent attenders (63%) favor allowing wedding-related businesses to turn away same-sex couples for religious reasons, including 88% of churchgoing white evangelicals and 62% of churchgoing white mainline Protestants. 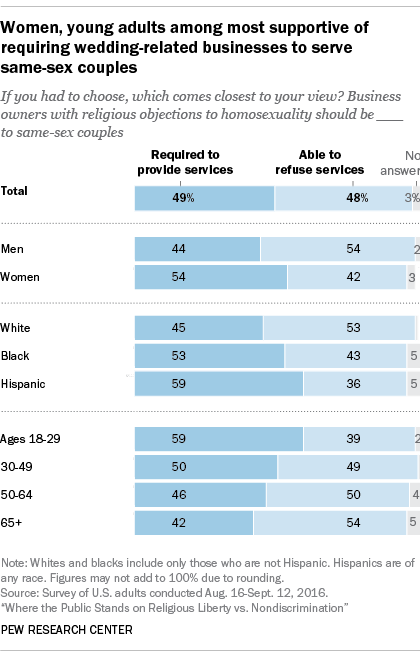 The survey also finds that more women than men favor requiring wedding-related businesses to provide service to same-sex couples. This view is also more common among young adults than among older people. Six-in-ten adults under age 30 say businesses should be required to serve same-sex couples, while adults over 30 are more closely divided.

Few people express sympathy for both points of view in the debate over religious freedom vs. nondiscrimination when it comes to businesses providing services for same-sex weddings. Indeed, two-thirds of adults say they sympathize “a lot” or “some” with only one side or the other (36% with the view that businesses should be required to serve same-sex couples, 31% with the view that they should be able to refuse service for religious reasons), while just 18% express sympathy for both points of view. This pattern – few people expressing sympathy for both of these opposing perspectives – is evident across every major religious and demographic group analyzed in the survey. 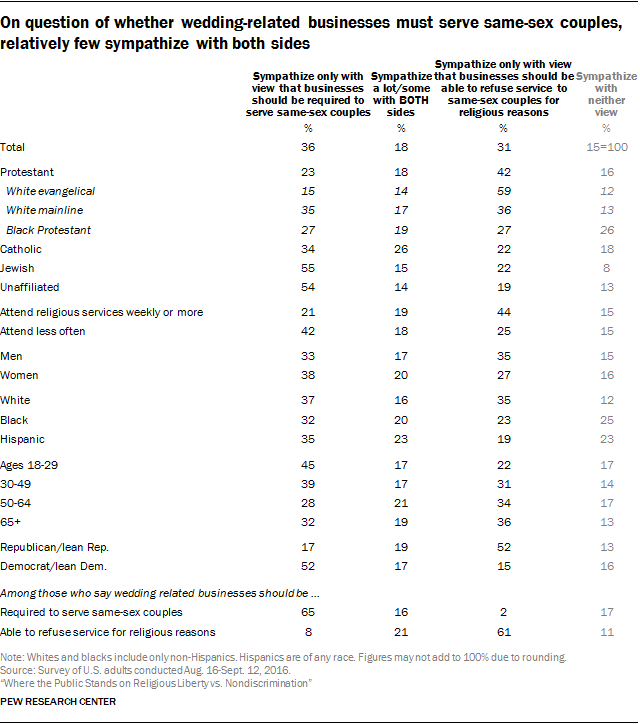 Next: 3. Public split over bathroom use by transgender people
← Prev Page
Page1Page2You are reading page3Page4Page5Page6Page7Page8
Next Page →

Where the Public Stands on Religious Liberty vs. Nondiscrimination 1. Most say birth control should be covered by employers, regardless of religious objections
2. Americans divided over whether wedding-related businesses should be required to serve same-sex couples
3. Public split over bathroom use by transgender people 4. Very few Americans see contraception as morally wrong 5. Vast majority of Americans know someone who is gay, fewer know someone who is transgender Acknowledgments Methodology