This study calculates Religious Diversity Index (RDI) scores for countries, regions and the world based on the shares of eight major world religions (Buddhism, Christianity, folk or traditional religions, Hinduism, Islam, Judaism, other religions considered as a group, and the religiously unaffiliated). The methodology used by Pew Research to calculate the levels of religious diversity was developed by former senior researcher Brian J. Grim in consultation with other members of the Pew Research Center staff, building on a methodology that Grim developed with Todd M. Johnson, director of the Center for the Study of Global Christianity.9

The RDI is a version of the Herfindahl-Hirschman Index, which is used in various fields to measure the degree of concentration of human or biological populations as well as organizations. The main difference is that RDI scores are inverted so that higher scores indicate higher diversity.10

The Herfindahl-Hirschman Index is a widely accepted measure of concentration used by biologists, ecologists, linguists, economists, sociologists and demographers. For instance, the U.S. Department of Justice and the Federal Reserve Board use the Herfindahl-Hirschman Index to evaluate the competitive effects of mergers.11 A variant of the index was introduced as a measure to describe the diversity of ecological populations and was used in a variety of related studies, including measuring the diversity of languages spoken in a region.12 Starting in the 1960s, the index was used to measure population groups, including occupations and religions.13 Sociologists and other population researchers consider the Herfindahl-Hirschman Index a reliable measure to describe religious diversity.14

Although the Herfindahl-Hirschman Index is one of the most commonly used measures of diversity, there are other measures in use, including the raw number of different religions of a certain share or size in a country.15 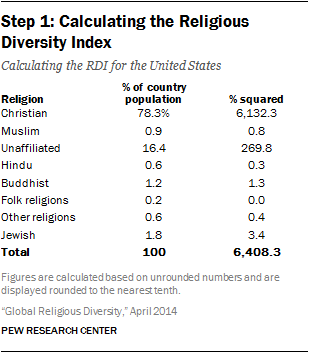 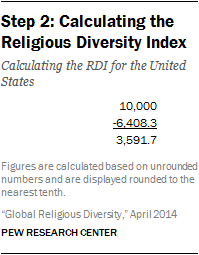 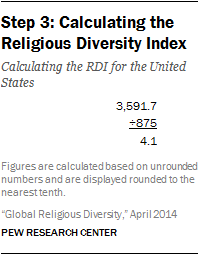 Third, the second-step score is divided by 875 to put the final Religious Diversity Index on a 0-10 scale. In the case where the entire population belongs to one religious group, the score would remain 0 (0/875=0). But in the case where the population is equally distributed among the eight major religious groups, the score would now become 10 (8,750/875=10). 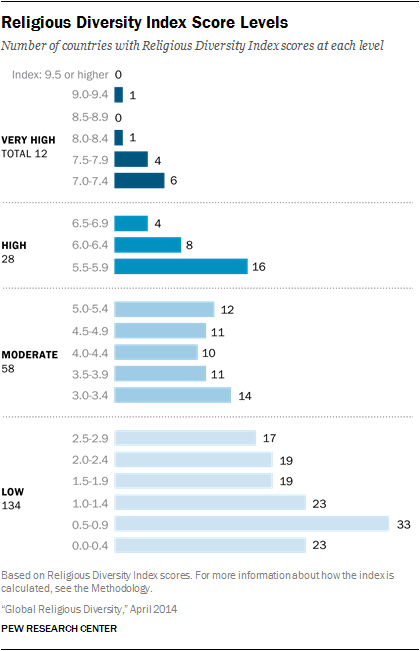 This new Pew Research study uses its estimates from the December 2012 report “The Global Religious Landscape: A Report on the Size and Distribution of the World’s Major Religious Groups as of 2010” to analyze religious diversity in 232 countries and territories for the year 2010. The study includes estimates for Christians, Muslims, the religiously unaffiliated, Hindus, Buddhists, folk religionists, adherents of other religions and Jews. Taken together, these eight major religious groups comprise the world’s total population.

The measure of religious identity in this study is sociological rather than theological. In order to have statistics that are comparable across countries, the study attempts to count individuals who self-identify with each religion. This includes people who hold beliefs that may be viewed as unorthodox or heretical by others who claim the same religion. It also includes people who do not regularly practice the behaviors prescribed by their religion, such as those who seldom pray or attend worship services.

For more information, see the Methodology of the Global Religious Landscape report. A list of the primary sources used to estimate the overall religious composition of each country is provided in Appendix B (PDF) of that report.

A Note on Geographic Spread and Segregation

Geographic distribution and/or segregation are important aspect of diversity. For instance, a recent analysis of census data indicates that even though racial diversity is increasing in the United States, it is rare to see highly diverse neighborhoods because segregation is still a common phenomenon.17 However, religious diversity at the subnational or neighborhood level is not estimated in this study primarily because of a lack of data at this level for almost every country in the world.

A Note on Regions

This report groups 232 countries and territories into six major regions: Asia and the Pacific, Europe, Latin America and the Caribbean, the Middle East and North Africa, North America and sub-Saharan Africa. Some previous Pew Research reports including “Global Christianity: A Report on the Size and Distribution of the World’s Christian Population” and “The Future of the Global Muslim Population” grouped the world into five regions, with an Americas region that included both North America and Latin America and the Caribbean.

The five countries and territories of North America are: Bermuda, Canada, Greenland, St. Pierre and Miquelon and the United States.