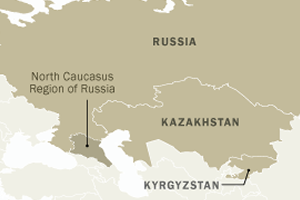 A new Pew Research Center survey report finds high levels of concern about religious extremism among Muslims in the North Caucasus area of Russia and the neighboring Central Asian countries of Kyrgyzstan and Kazakhstan. The survey also finds that few Muslims across the region support the use of violence against civilians in the name of Islam, though there is somewhat more support for suicide bombing and similar violence among Muslims in Kyrgyzstan than in Russia or Kazakhstan.

The North Caucasus, including the Russian republics of Chechnya and Dagestan, has been in the news since authorities in Boston said last week that the leading suspects in the April 15 Boston Marathon bombings were ethnic Chechens. According to news reports, one or both of the bombers also may have lived in Kyrgyzstan and Kazakhstan, where many Chechens have sought refuge from the conflict in their homeland. (Russia, Kyrgyzstan and Kazakhstan were surveyed as part of a major Pew Research poll of Muslims around the world that will be released in the near future.) 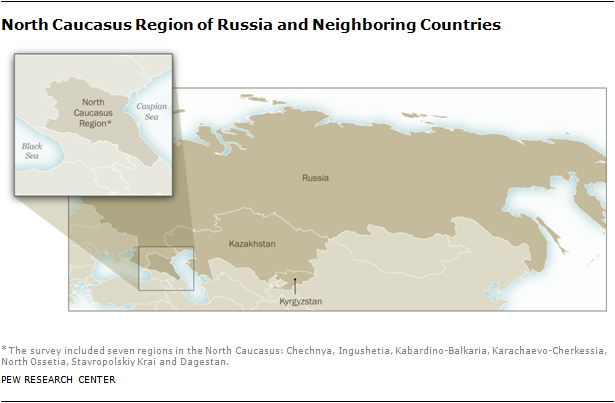 The Pew Research survey also asked about attitudes toward suicide bombing and other violence against civilians in the name of Islam. More than eight-in-ten Russian Muslims (86%) say acts of violence that target innocent civilians are never justified as a means of defending Islam against its enemies. Among Muslims in Russia’s North Caucasus, upwards of nine-in-ten (93%) think such acts of violence are never justified.

In Central Asia, violence against civilians also is widely rejected. Most Muslims in Kazakhstan (93%) and Kyrgyzstan (66%) say suicide bombing and similar forms of violence are never justified.

Across Russia, Kazakhstan and Kyrgyzstan, few Muslims say acts of violence targeting innocent civilians are justified. No more than one-in-ten Muslims in Kazakhstan (2%), Russia (4%) or Kyrgyzstan (10%) say violence in the name of Islam is either “sometimes” or “often” justified.

The Pew Research Center also has data on the religious demography of Russia, Kazakhstan and Kyrgyzstan. As of 2010, there were an estimated 14 million Muslims in Russia, comprising about 10% of the country’s total population, according to estimates from the Pew Research Center’s 2012 Global Religious Landscape report. Russia has more than 100 million Christians (73% of its total population), while the religiously unaffiliated number about 23 million (16%). As of 2010, there were more than 400,000 immigrants born in Russia living in the United States.

Kyrgyzstan’s Muslim population numbered nearly 5 million (or 88% of its total population) in 2010. There also are more than half a million Christians (11%) in the country. Nearly 10,000 people born in Kyrgyzstan have immigrated to the U.S. during the last 20 years.

Kazakhstan’s Muslim population numbered more than 11 million (70% of its total population) in 2010. There also are approximately 4 million Christians (25%) and about 700,000 religiously unaffiliated people (4%) in Kazakhstan. There are more than 20,000 immigrants born in Kazakhstan living in the United States.