American Muslims, like Muslims in other countries, overwhelmingly accept certain core religious beliefs, such as the conviction that there is one God and that Muhammad is His Prophet. However, U.S. Muslims tend to be less observant than Muslims in many countries surveyed when it comes to practices such as daily prayer and mosque attendance. Moreover, American Muslims stand out from other Muslims surveyed on the question of orthodoxy: Muslims in the U.S. are much more inclined to say that Islam is open to multiple understandings, rather than a single, correct interpretation.

Nearly all American Muslims adhere to central tenets of the Islamic faith, according to Pew Research Center surveys of U.S. Muslims in 2011 and 2007. For instance, the percentage of U.S. Muslims who believe in one God (96%) and the Prophet Muhammad (96%) is about the same as the median percentage across the countries included in the current study who subscribe to these core tenets (97%). More than eight-in-ten U.S. Muslims say the Quran is the word of God, including 50% who say it should be read literally. By comparison, about nine-in-ten or more Muslims in every country surveyed in sub-Saharan Africa – the only region in the current survey where the question was asked – say the Quran is the word of God, and about three-quarters or more in most sub-Saharan countries say the Islamic holy book should be taken literally, word for word. At the same time, the proportion of U.S. Muslims who say they believe in the existence of angels (90%) is in line with attitudes among Muslims in other parts of the globe (a median of 88% say angels exist). 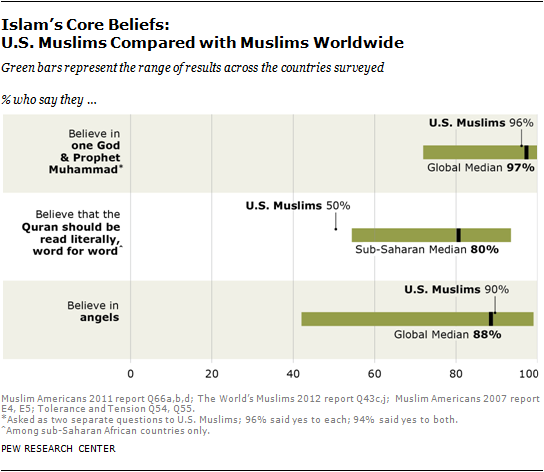 A majority of American Muslims (69%) say religion is very important in their lives. However, U.S. Muslims place somewhat less emphasis on religion than Muslims in most of the countries in the current survey (a median of 87% say religion is very important to them). In addition, when it comes to practices such as prayer and mosque attendance, American Muslims are somewhat less observant than most Muslims surveyed elsewhere in the world. About two-thirds (65%) of U.S. Muslims say they pray once a day or more, while slightly less than half (47%) attend mosque at least once a week. Across the other countries surveyed, a median of 76% report praying daily, and 61% say they attend mosque one or more times a week. 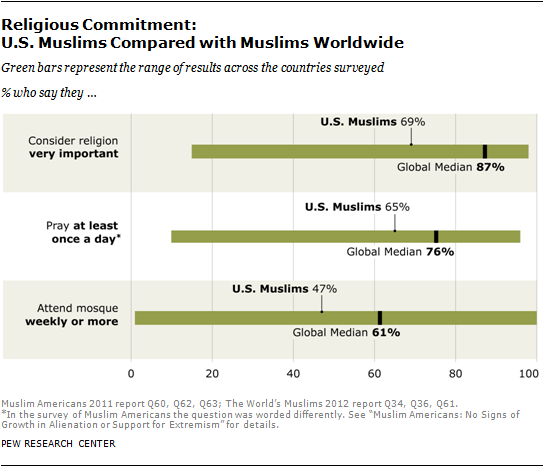 Download the topline survey results on these questions from the 2011 and 2007 Pew Research Center surveys of U.S. Muslims (PDF, 31 KB, 2 pages)

Next: Appendix B: Glossary
← Prev Page
Page1Page2Page3Page4Page5Page6Page7Page8You are reading page9Page10Page11
Next Page →