In addition to probing opinions about different sects, the survey asked whether certain forms of worship – visiting shrines, reciting religious poetry and dancing devotionally – are acceptable under Islam. The survey also asked whether the teachings of Islam permit appeals to dead ancestors and jinn and the use of sorcery. 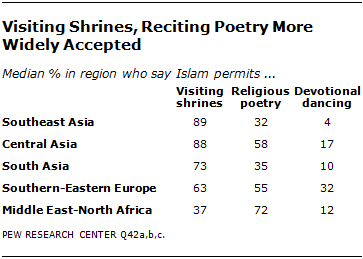 In most of the 23 countries where the question was asked, majorities endorse visiting shrines of Muslim saints as a legitimate form of worship. This view is especially widespread in Central Asia, Southeast Asia and South Asia. Visiting shrines is least accepted in the Middle East and North Africa where, with the exception of Lebanon and Iraq, fewer than half think this practice is part of Islamic tradition.

There is also substantial approval of devotional poetry or singing as a form of worship. In more than half of the 23 countries where the question was posed, at least 50% of Muslims say reciting poetry is part of Islamic tradition, including as many as 91% in Lebanon and 88% in Afghanistan.

Far fewer see devotional dancing as an acceptable practice. Indeed, Turkey is the only country surveyed in which a majority (72%) believes such dancing falls within the bounds of Islam – perhaps reflecting the prominence of Turkey’s Mevlevi Sufi order, the “whirling dervishes,” known for their devotional dances.

Appealing to deceased relatives or ancestors for aid is generally seen as outside the Islamic faith, although sizable numbers accept the practice in Central Asia, Russia and Bosnia-Herzegovina. Appeals to jinn and the use of sorcery are almost universally regarded as falling outside of Islamic tradition even though, as previously discussed, many Muslims say they believe in the existence of these supernatural beings and in witchcraft. (See Chapter 4).

In Azerbaijan, Iraq and Lebanon, which are home to substantial numbers of both Sunnis and Shias, there is no clear sectarian divide over which forms of worship or practice are accepted within Islam. On only one issue – appealing to deceased ancestors – are Shias in all three countries more accepting than their Sunni counterparts. 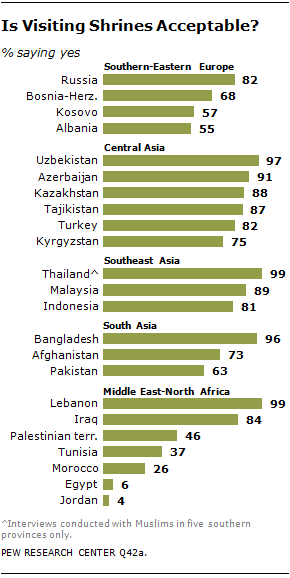 Other than the pilgrimage to Mecca, which is one of the Five Pillars of Islam (see Five Pillars of Islam text box in Chapter 2), the Quran does not specifically mention pilgrimages. However, certain hadith encourage pilgrimages to shrines, including Jerusalem’s al-Aqsa mosque in the Sunni tradition and the shrine of Imam Hussein in Karbala, Iraq, in the Shia tradition.28 Overall the survey finds that many Muslims consider visiting the shrines of Muslim saints an acceptable practice.

This is especially true in Southeast Asia, where eight-in-ten or more Muslims in Thailand (99%), Malaysia (89%) and Indonesia (81%) say visiting shrines falls within the bounds of Islam. The acceptance of pilgrimages to shrines is also widespread in Central Asia, with three-quarters or more endorsing the practice.

In South Asia, the number of Muslims who believe visiting shrines is part of Islamic tradition ranges from 96% in Bangladesh to a more modest 63% in Pakistan. In Southern and Eastern Europe (Russia and the Balkans), too, opinion varies considerably: 82% of Russian Muslims say the practice is acceptable, but fewer than six-in-ten Muslims in Kosovo (57%) and Albania (55%) agree.

Acceptance of pilgrimages to shrines is lower in the Middle East and North Africa. Although large majorities in Lebanon (99%) and Iraq (84%) see the practice as part of Islamic tradition, relatively few Muslims elsewhere in the region agree, including just 6% in Egypt and 4% in Jordan.

Many Muslims agree that it is acceptable to recite poetry or sing in praise of God. In 17 of the 23 countries where the question was asked, roughly half or more take this view.

Religious poetry is embraced in much of the Middle East and North Africa, including in Lebanon, where 91% believe this practice falls within the bounds of Islam. Elsewhere in the region, seven-in-ten or more in Iraq (74%), Jordan (73%) and Egypt (72%) share this view. Only in Tunisia (38%) do fewer than half agree.

Reciting poetry in praise of God is also endorsed by roughly half or more Muslims in most of the nations surveyed in Central Asia and across Southern and Eastern Europe. Indeed, more than six-in-ten affirm this practice in Russia (79%), Turkey (77%), Kazakhstan (65%), Azerbaijan (64%) and Bosnia-Herzegovina (61%). Uzbekistan is the only country in the two regions where fewer than one-in-five Muslims (17%) say religious poetry is part of Islamic tradition.

Attitudes toward reciting poetry vary considerably in South Asia and Southeast Asia: more than seven-in-ten in Afghanistan (88%) and Malaysia (73%) voice acceptance, while only about a third approve in Pakistan (35%), Thailand (32%), Indonesia (28%) and Bangladesh (28%).

In a number of countries, religious commitment, as measured by frequency of prayer, is linked with attitudes toward religious poetry. For example, in Russia, 91% of those who pray more than once a day believe reciting poetry is acceptable, compared with only 74% of those who pray less often. Similar gaps are found in Azerbaijan (+14 points among those who pray more than once a day), Kyrgyzstan (+14), Turkey (+12), Malaysia (+11) and Indonesia (+9). In Egypt and Pakistan, by contrast, those who pray multiple times a day are less likely to believe poetry is permissible, by 18 and 11 percentage points, respectively.

Unlike visiting shrines or reciting religious poetry, relatively few Muslims endorse devotional dancing as a form of worship.29 In all but one of the countries surveyed, fewer than four-in-ten say this practice is part of Islamic tradition. The exception is Turkey, where 72% of Muslims believe devotional dancing falls within the bounds of Islam. That Turkish Muslims depart from other Muslims on this question is perhaps not surprising given the prominence of the so-called “whirling dervishes” in Turkish culture.

In Turkey, Muslims who pray several times a day are more likely to say that devotional dancing is acceptable (+16 percentage points). The same pattern holds in Russia and Lebanon, but with even larger gaps (+23 percentage points each). 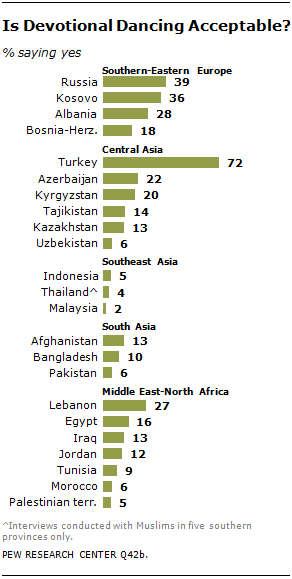 Appeals to Spirits, Jinn and Sorcery

Appealing to the Deceased

Relatively few Muslims in the countries surveyed believe it is permissible to appeal to dead relatives or ancestors for aid. However, views on this question vary by region.30

Muslims in Central Asia tend to be the most accepting of the practice, with more than three-in-ten in Kazakhstan (51%), Uzbekistan (38%), Kyrgyzstan (35%) and Tajikistan (32%) saying appeals to spirits of the dead are part of Islamic tradition.

Across Southern and Eastern Europe, about a third of Muslims in Bosnia-Herzegovina (36%) and Russia (34%) believe appeals to deceased relatives or ancestors are acceptable, but fewer than one-in-five in Albania (16%) and Kosovo (5%) agree.

Acceptance of the practice is relatively rare in South Asia and Southeast Asia, with less than a fifth of Muslims in these regions saying it is part of Islamic tradition. Meanwhile, in most countries in the Middle East and North Africa, only a handful of Muslims say appeals to the deceased fall within Islam. The two exceptions are Iraq and Lebanon, where 28% and 22% of Muslims, respectively, say the practice is acceptable, perhaps reflecting the Shia tradition of honoring forebears, such as Hussein and Ali.31

The Quran states that God created non-human creatures, referred to as jinn and, as discussed earlier in this report, many Muslims affirm that jinn exist (see Jinn in Chapter 4). However, few Muslims believe it is an accepted part of Islamic tradition to make offerings or appeals to these supernatural beings.32

Among the countries surveyed, only in Bangladesh do more than a fifth of Muslims (28%) say this practice is part of Islamic tradition. In Russia (18%), Kazakhstan (15%), Bosnia-Herzegovina (12%) and Afghanistan (10%), one-in-ten or more also share this view. But elsewhere, very low percentages of Muslims believe appeals to jinn are acceptable.

As discussed earlier in this report, substantial numbers of Muslims believe in the existence of witchcraft (see Witchcraft in Chapter 4). Nevertheless, across the nations surveyed, there is near universal agreement that the use of sorcery is not permissible within Islam.33 In only three countries – Thailand (22%), Albania (12%) and Kazakhstan (10%) – do one-in-ten or more say the use of sorcery falls within the bounds of Islam.

Sunni and Shia Views on Boundaries of Practice

In Azerbaijan, Iraq and Lebanon, which are each home to substantial numbers of Sunni and Shia Muslims, the survey finds no clear sectarian divide regarding the boundaries of acceptable worship or practice. That is not to say that members of the two groups always agree on what is permitted within Islam, but the degree, and direction, of disagreement varies more by country than by sect. 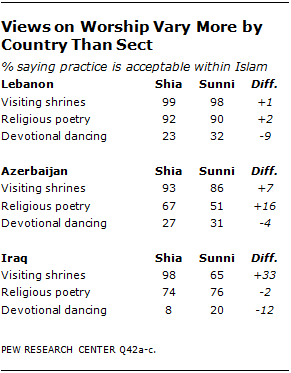 In Lebanon, Sunnis and Shias generally concur that visiting shrines and reciting poetry in praise of God are accepted within Islam. And on the question of devotional dancing, similarly low percentages of Shias and Sunnis approve.

Among Shias and Sunnis in Azerbaijan, there is general agreement that visiting shrines is permitted within Islam, but many fewer in both sects say the same about devotional dancing. The sects do diverge on reciting religious poetry, but only slightly.

In Iraq, Shias and Sunnis do not differ greatly on the acceptance of religious poetry. And although the two groups do significantly diverge (33 percentage points) on the question of shrine visitation, a majority of Iraqi Sunnis (65%) still endorse the practice – unlike their counterparts in nearby countries such as Jordan and Egypt, where only 3% and 4% of Sunnis, respectively, share this view. 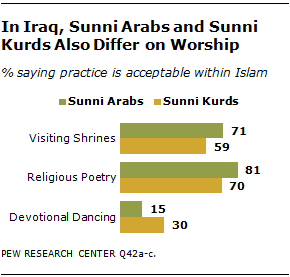 Iraqi Sunnis are more inclined (12 percentage points) to approve of devotional dancing than are Shias, although this gap is largely due to the fact that Sunni Kurds – who are concentrated in the country’s north, where Sufi traditions tend to be stronger – are twice as likely as the country’s Sunni Arabs to endorse devotional dancing. 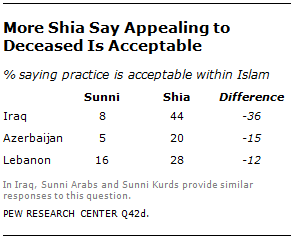 In all three countries, Shia and Sunni Muslims differ little when it comes to rejecting the use of sorcery within Islam. And in Lebanon and Azerbaijan, members of both groups hold similar views on the acceptability of making appeals to jinn.34

The survey finds a consistent pattern of sectarian differences on only one practice: appealing to deceased relatives or ancestors. Across all three countries, significantly more Shias than Sunnis approve of this practice. Again, this may reflect the widespread tradition of venerating and appealing to figures such as Ali and Hussein in the Shia tradition.35

29 Devotional dancing tends to be more common among some Sufi orders. These orders uphold that it is a form of dhikr (also transliterated as zhikr), literally meaning “remembrance of God.” Dhikr is prescribed in the Quran (13:28; 33:41; 87:14-15), and a common form is performed by reciting the 99 names of God. For more on dhikr and Sufism, see the Pew Forum’s 2010 report “Muslim Networks and Movements in Western Europe.” (return to text)

31 Ali was the son-in-law of the Prophet Muhammad and, according to Shias, the rightful successor (Imam) to the Prophet. Hussein, one of Ali’s sons, was the third Imam in Shia Islam. (return to text)

32 The Quran states that prayers and sacrifices should be made to God alone (108:2). (return to text)

34 The results of this item are not available for Iraq due to an administrative error. (return to text)

Next: Appendix A: U.S. Muslims: Beliefs and Practices in a Global Context
← Prev Page
Page1Page2Page3Page4Page5Page6Page7You are reading page8Page9Page10Page11
Next Page →