Most of the world’s Muslims identify as Sunnis or Shias.8 However, many Muslims do not identify with either sect but rather see themselves as “just a Muslim.” At least one-in-five Muslims in 22 of the 38 countries where the question was asked identify themselves in this nonsectarian way.9

Other affiliations, such as membership in a Sufi order, may overlap with Sunni and Shia identities. Although Sufism has a long history within Islam, relatively few Muslims describe themselves as Sufis or say they belong to a particular Sufi brotherhood. Self-identified Sufis are most prevalent in sub-Saharan Africa and South Asia.

The overwhelming majority of people who identify as Muslim today were raised within the Islamic faith. In sub-Saharan Africa, which has some of the countries with the highest percentage of people who have switched faiths since childhood, most who have converted to Islam have done so from either Christianity or traditional African religions.10 In other regions, nearly all adult Muslims who were not raised in the faith grew up in nonreligious households.

Religious Identity Among Muslims in the Survey 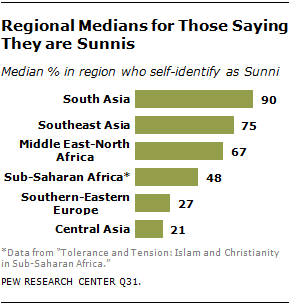 In 20 of the countries surveyed, half or more Muslims identify as Sunni. Self-identified Sunnis make up a high percentage of Muslims in South Asia, Southeast Asia, and the Middle East and North Africa. Across these three regions, the median percentage of Sunnis is two-thirds or more. About half the Muslims surveyed in sub-Saharan Africa self-identify as Sunni. In Central Asia and across Southern and Eastern Europe (Russia and the Balkans), by contrast, self-identification as Sunni is less common. Across both regions, the median percentage of people identifying as Sunni is fewer than three-in-ten.

Relatively few Muslims in the 38 countries where the question was asked say they are Shia. Those who do are concentrated in Iraq, Lebanon, Azerbaijan, Afghanistan, Pakistan, Russia and 10 sub-Saharan African countries.11 In addition to those who specifically identify as Shia, some respondents report belonging to regional sects or religious orders that are often classified as branches of Shia Islam. For example, 5% of Turkish Muslims volunteer that they are Alevis, while 2% of Kosovar Muslims volunteer that they are Bektashis. (See Glossary.)

Many Muslims worldwide choose not to affiliate with a specific sect but volunteer that they are “just a Muslim.” This affiliation is most common in Central Asia and across Southern and Eastern Europe; in both regions, the median percentage stating they are “just a Muslim” is half or more. In Kazakhstan, nearly three-quarters (74%) of Muslims volunteer this response, as do more than six-in-ten Muslims in Albania (65%) and Kyrgyzstan (64%).

In sub-Saharan Africa and Southeast Asia, substantial minorities also consider themselves “just a Muslim” (medians of 23% and 18%, respectively). And in three countries – Indonesia (56%), Mali (55%) and Cameroon (40%) – “just a Muslim” is the single most-frequent response when people are queried about their sect. Identification as “just a Muslim” is less prevalent in the Middle East and North Africa (median of 12%) and South Asia (median of 4%).

In addition to Muslims who identify as Sunni, Shia or “just a Muslim,” the survey finds substantial percentages of Muslims who express affiliation with other sects or movements. For instance, many Muslims, particularly in sub-Saharan Africa, identify as Ahmadiyyas. (See Glossary). This affiliation is most common in Ghana (16%), Tanzania, (15%), Cameroon (12%) and Liberia (10%).

Based on how Muslims self-identify in the survey, the 38 countries where the questions were asked can be grouped into four categories: 1) predominantly Sunni; 2) mix of Sunni and Shia; 3) predominantly “just a Muslim”; and 4) countries with no prevailing sectarian identity. These categories do not fully overlap with regional divisions, but certain geographic patterns are evident. For example, countries without a clear, dominant sectarian identity are concentrated in sub-Saharan Africa, while nations where “just a Muslim” predominates are found mostly in Central Asia and across Southern and Eastern Europe. 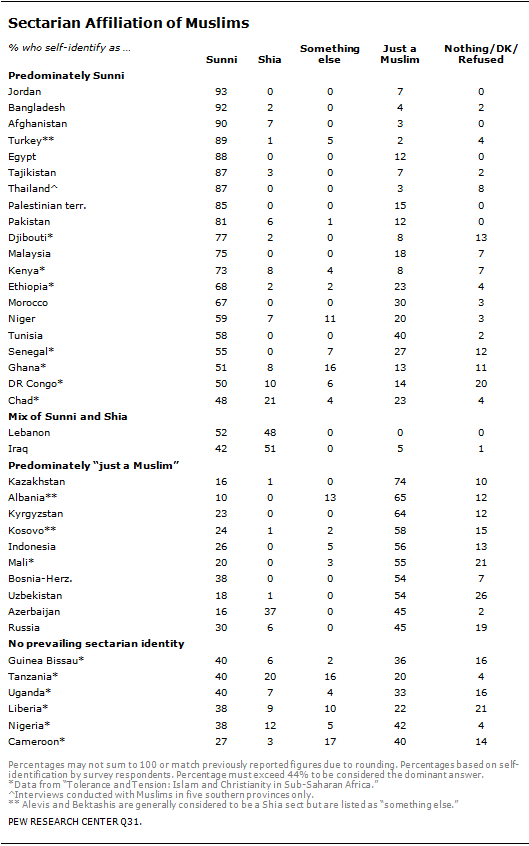 For some Muslims, another layer of identity comes from membership in a Sufi order, or tariqa. Also known as brotherhoods, Sufi orders represent a mystical movement within Islam that emphasizes the possibility of gaining direct knowledge of God through euphoric worship and other practices. These orders can fall within either Sunni or Shia Islam.

The second most widespread movement is the Qadiriyya brotherhood, which is followed by 11% of Muslims in Chad, 9% in Nigeria and 8% in Tanzania. Additionally, the Muridiyya order is prevalent in Senegal (34%), but it does not have a broad following among Muslims in other countries surveyed.

In the other regions surveyed, affiliation with Sufi orders is less common. Only in Bangladesh (26%), Russia (19%), Tajikistan (18%), Pakistan (17%), Malaysia (17%), Albania (13%) and Uzbekistan (11%) do more than one-in-ten Muslims identify with a Sufi brotherhood. Several orders are prominent in individual countries, including the Naqshbandiyya in Tajikistan (16% of all Muslims), Chistiyya in Bangladesh (12%) and Bektashiyya in Albania (12%).

The survey finds that the vast majority of adult Muslims were raised as Muslims. Nine-in-ten or more in all but four countries surveyed indicate that they had the same faith as children. In South Asia and across the Middle East and North Africa, nearly 100% of adult Muslims surveyed say they were raised in the Islamic faith.

In Southeast Asia, conversion to Islam is similarly rare. Evidence of religious switching is found only in Thailand, where 3% of Muslims report growing up as Buddhists.

In Central Asia and across Southern and Eastern Europe, conversion to Islam is more common, with 10% of adult Muslims in Kazakhstan, 7% in Russia, 6% in Uzbekistan and 5% in Albania stating they were not raised in the faith. Nearly all these instances of switching involve people who were brought up as atheists, agnostics or “nothing in particular” and later adopted Islam as their faith.

Changing from Sunni to Shia, or vice versa, is relatively rare. In the case of Shias, only in Azerbaijan does the percentage of respondents who were raised Shia and who are currently Shia differ by as much as five points. Elsewhere the difference is two percentage points or less. 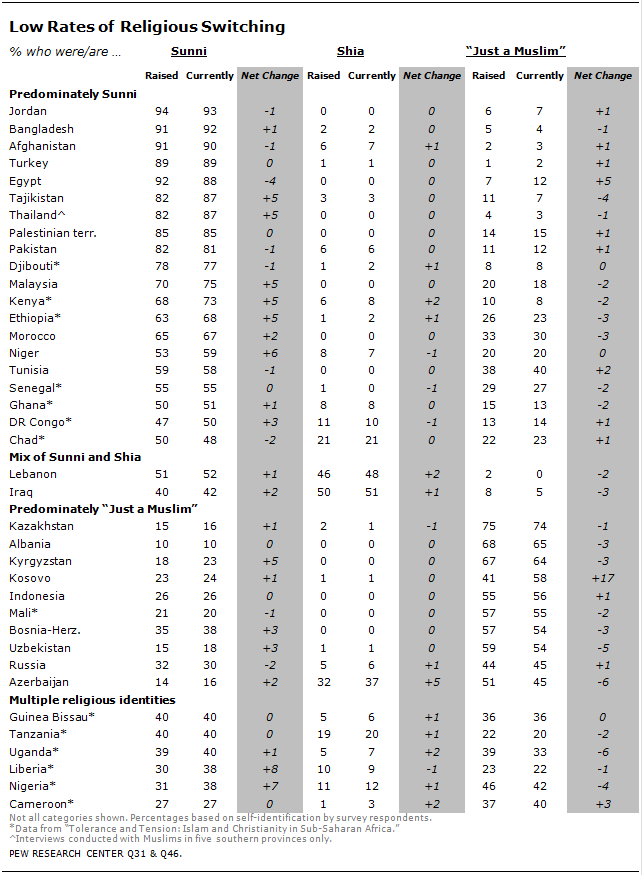 8 All figures for Shia and Sunni subgroups within countries are based on self-identification in response to a multi-part survey question that first asked if an individual was Muslim (Q28 and Q28b), and if yes, if they were Sunni, Shia or “something else” (Q31). The percentage of Shias and Sunnis identified by the survey may diverge from country estimates reported in the Pew Forum’s 2009 report “Mapping the Global Muslim Population,” which are based on demographic and ethnographic analyses, as well as reviews of frequently used estimates. (return to text)

9 Due to data collection problems with this question in Mozambique, results for Mozambique are not reported for sectarian identity. (return to text)

10 For more details, see the Pew Forum’s 2010 report “Tolerance and Tension: Islam and Christianity in Sub-Saharan Africa.” (return to text)