Rick Santorum won the Louisiana Republican primary on Saturday by 22 points over Mitt Romney, his closest competitor. Newt Gingrich finished in third place in Louisiana and Ron Paul finished fourth. Santorum won the majority of votes cast by white evangelical/born-again Christians, people who attend worship services weekly and voters who say it is at least somewhat important to have a candidate who shares their religious beliefs. A Catholic himself, Santorum also won a clear victory among Catholic voters for the first time this primary season.

Non-evangelical voters were closely divided between Santorum (38%) and Romney (35%). Gingrich received 16% of non-evangelicals’ votes, while Paul garnered 8% support from this group. 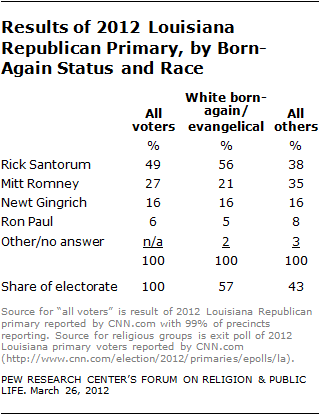 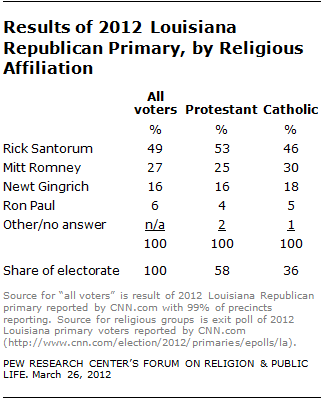 Santorum received nearly three times as much support as Romney from regular churchgoers in Louisiana. Nearly six-in-ten Louisiana voters who report attending religious services at least once a week voted for Santorum (58%). One-in-five regular churchgoers voted for Romney (21%), while 14% supported Gingrich. Those who attend religious services occasionally were much more closely divided, with 36% voting for Romney and 33% for Santorum. 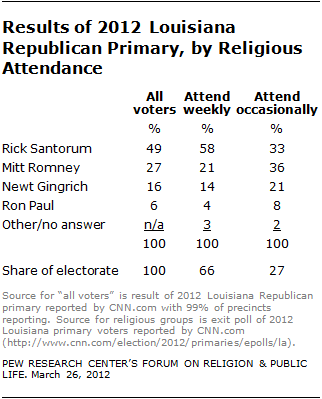 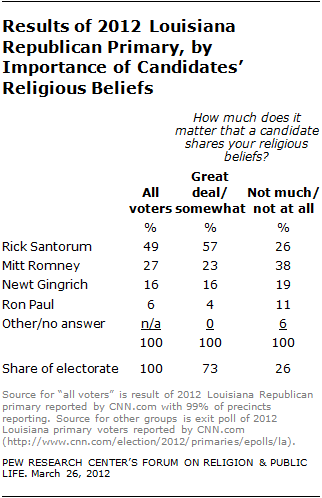 This analysis is based on results from exit polls conducted as voters left the polls during the Louisiana Republican primary election. The polls were conducted by Edison Media Research for the National Election Pool. Full results and additional details from the Louisiana exit poll can be accessed at http://www.cnn.com/election/2012/primaries/epolls/la.

This analysis is based on exit poll data that were available as of 8:00 a.m. on March 26. Exit poll data are sometimes reweighted, so some figures may be different from those available on CNN.com.

2 The Louisiana exit poll included too few interviews to permit analysis of voters from religious traditions other than Protestantism or Catholicism. (return to text)