Many state prisons make extensive use of volunteers from houses of worship or other religious organizations to help meet the spiritual needs of inmates. A majority of chaplains say that more volunteers are needed, particularly for inmates who belong to minority faiths such as Islam, Wicca and Native American spirituality. About a third of the chaplains surveyed also say that volunteers from some religious groups are overabundant. In particular, they tend to cite Protestant groups as providing more volunteers than necessary to meet the religious needs of inmates. Generally speaking, the prison chaplains give religious volunteers high marks for the way they lead worship services, education classes and prayer groups but somewhat lower marks for mentoring inmates and their children.

Supply of Volunteers: Too Few or Too Many?

Among those expressing this view, 55% say that more Muslim volunteers are needed. (This figure includes 7% specifically mentioning the Moorish Science Temple of America and 6% mentioning the Nation of Islam.) Other commonly named groups for which more volunteers are needed include pagan or earth-based religions, such as Wicca, Odinism, Asatru and Druidism (35%), and Native American spirituality (32%). (Note that percentages do not add to 100% because multiple responses were allowed. See Glossary for brief definitions of some smaller religious groups.)

At the same time, about a third of prison chaplains (32%) say some religious groups provide more volunteers than necessary to meet the religious needs of inmates. Among the chaplains who say this, Protestants are the most commonly named group (net of 52%); an additional 26% mentioned “Christians” with no further specification. A total of 7% mentioned Catholics. No other religion was named by more than 10% of the chaplains responding.

How are Religious Volunteers Performing? 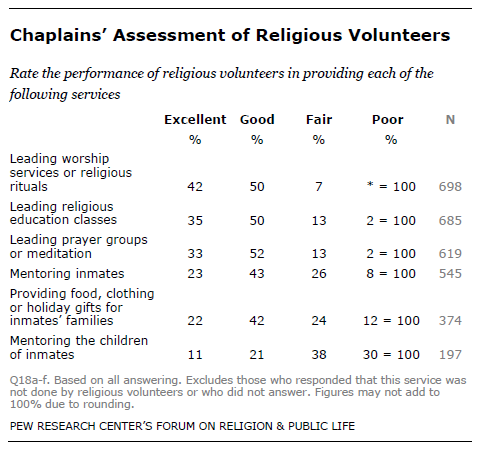 Volunteers receive more mixed reviews for their efforts at mentoring inmates. Of the chaplains offering an opinion, two-thirds say volunteers make excellent (23%) or good (43%) mentors for inmates, but a third rate them as only fair (26%) or poor (8%). In recent years, federal and state authorities also have encouraged mentoring programs for the children of inmates. But, as previously noted, many chaplains say that in the prisons where they work, religious volunteers are not involved in mentoring inmates’ children. And of the chaplains who offer an opinion, only about a third say that religious volunteers do an excellent job (11%) or a good job (21%) of mentoring inmates’ children, while about two-thirds say they do either a fair (38%) or poor job (30%).

Next: Chaplains’ Perspectives on the Religious Lives of Inmates
← Prev Page
Page1Page2Page3Page4You are reading page5Page6Page7Page8Page9Page10Page11
Next Page →