Mitt Romney won six of the 10 GOP caucuses and primaries held on Super Tuesday, while Rick Santorum won three states and Newt Gingrich was victorious in one. Romney continues to struggle among the GOP’s white born-again/evangelical voters. He did win the evangelical vote in two of the seven states where exit polling was conducted – Massachusetts (where he served as governor) and Virginia (where neither Santorum nor Gingrich were on the ballot).1 In four states, Romney received significantly less support from evangelicals than from non-evangelical voters. This continues the pattern seen in previous caucuses and primaries; before Super Tuesday, Romney had received less support from evangelicals than from non-evangelicals in every contest for which data are available.

Exit polls in four of the Super Tuesday states asked voters about their religious affiliation (Protestant, Catholic, etc.). Romney, Santorum and Gingrich each won the Protestant vote in one state, while Protestants were evenly divided between Romney and Santorum in the fourth (Ohio). Catholics preferred Romney in two states (Massachusetts and Ohio) and were evenly divided in Georgia (between Romney and Gingrich) and Tennessee (between Romney and Santorum). Santorum, who has been Romney’s closest competitor in recent primaries and who is Catholic himself, has yet to achieve an outright victory among Catholics in any state for which data are available.

Exit polls also show that Romney continues to get less support from voters who say it is important to them to have a candidate who shares their religious beliefs than from voters for whom this is not important. Virginia is the only Super Tuesday state for which data are available in which Romney was the clear favorite of voters who say it matters “a great deal” or “somewhat” that a candidate shares their religious beliefs.

There was considerable variance from state to state on Super Tuesday in evangelicals’ voting preferences.2 Santorum won the evangelical vote in three of the Super Tuesday states for which data are available, beating Romney by double digits in Ohio, Oklahoma and Tennessee. Romney was victorious among evangelicals in two states, Massachusetts (where he defeated Santorum by a 57%-25% margin) and Virginia (where neither Gingrich nor Santorum were on the ballot). Gingrich received 52% support and won the evangelical vote in Georgia. In Vermont, evangelicals were more closely divided than in the other Super Tuesday states, with 39% voting for Romney and 33% supporting Santorum. 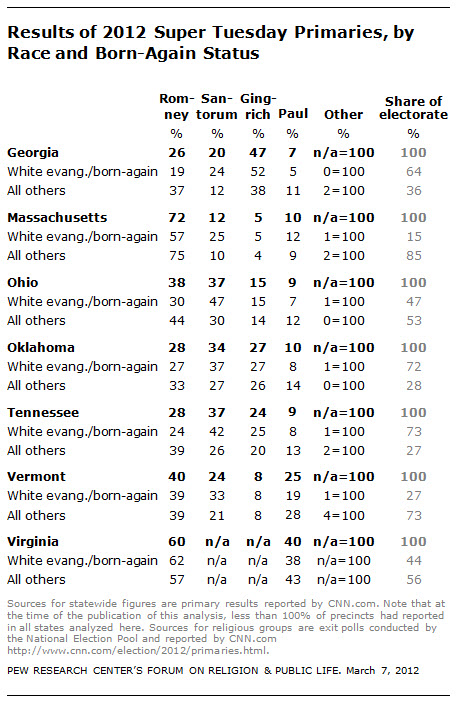 By contrast, Santorum received significantly more support from evangelicals than from non-evangelical voters in all six Super Tuesday states for which data are available and where he was on the ballot. This also continues the pattern observed in earlier primaries. 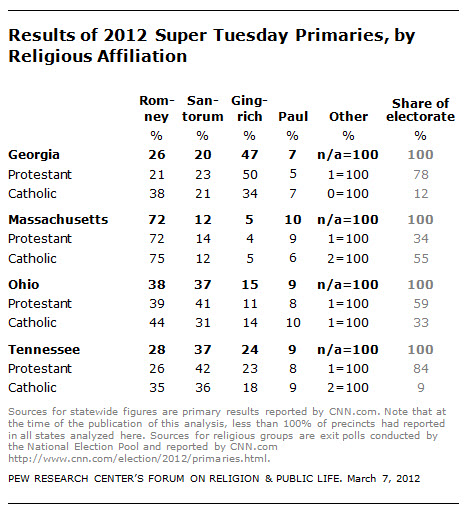 Exit polls in five states included a question asking voters how much it matters to them that a candidate shares their religious beliefs. Santorum was victorious in two states (Oklahoma and Tennessee) among voters who say a candidate’s religion matters “a great deal” or “somewhat” to them, while Romney carried this group in Virginia, and Gingrich was victorious among these voters in Georgia. In Ohio, voters who attach at least some importance to having a candidate who shares their religious beliefs were closely divided between Santorum (40%) and Romney (36%). 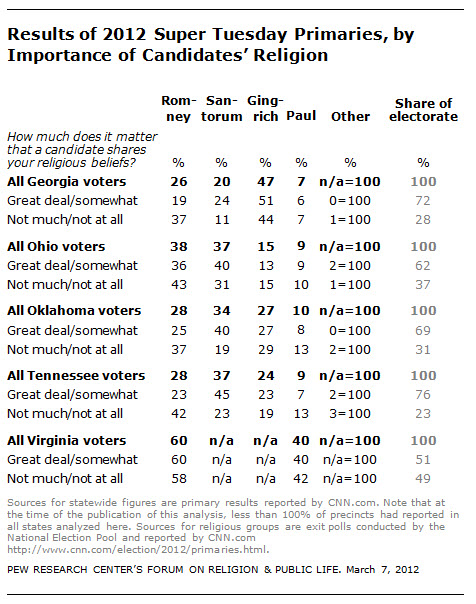 Voters who say that candidates’ religious beliefs matter “not much” or “not at all” supported Romney by double digits in three states (Ohio, Tennessee and Virginia) and were more evenly divided in two states (Georgia and Oklahoma). Combining Super Tuesday’s results with previous caucuses and primaries,4 Romney has now performed better in six of the eight states for which data are available among voters who say a candidate’s religion is not important than among those who attach “a great deal” or some importance to having a candidate who shares their religious beliefs.

This analysis is based on results from exit polls conducted as voters participated in GOP primaries on Super Tuesday, March 6, 2012. The polls were conducted by Edison Media Research for the National Election Pool. Full results and additional details can be accessed at http://www.cnn.com/ELECTION/2012/primaries.html.

This analysis is based on exit poll data that were available as of 11:00 a.m. on March 7. Exit poll data are sometimes reweighted, so some figures may be different from those available on CNN.com and from previously published Pew Forum analyses.

1 Exit polling was conducted in seven of the 10 states that held caucuses or primaries on March 6, 2012: Georgia, Massachusetts, Ohio, Oklahoma, Tennessee, Vermont and Virginia. Questionnaires in all seven states where polling was conducted asked voters whether they are born-again or evangelical Christians. In four of the seven states (Georgia, Massachusetts, Ohio and Tennessee), polls also asked voters about their religious affiliation (Protestant, Catholic, Jewish, Muslim, etc.). In five states (Georgia, Ohio, Oklahoma, Tennessee and Virginia), polls asked voters how much it matters to them to have a candidate who shares their religious beliefs. No entrance or exit polling was conducted in Alaska, Idaho or North Dakota. (return to text)

2 Voters can describe themselves in exit polls as born-again or evangelical Christians regardless of their religious affiliation, meaning that the born-again/evangelical category likely includes not only Protestants but also some Catholics and even some voters who say they have “no religion.” (return to text)

3 Exit polls conducted in the Super Tuesday states included too few interviews to permit analysis of voters from religious traditions other than Protestantism or Catholicism. (return to text)

4 For analysis of this question from previous primaries, see the Pew Forum’s reports on the South Carolina and Arizona/Michigan primaries. (return to text)