Eleven states held GOP presidential primaries or caucuses in January or February 2012.1 Mitt Romney has won more of these elections (and more delegates) than any other Republican candidate. Analysis of the role of religion in these early primaries and caucuses shows that Romney’s wins have come on the strength of his support among non-evangelical voters. While Romney’s fortunes among white born-again/evangelical voters have fluctuated from state to state, entrance and exit polls show that he has received less support from evangelicals than from non-evangelicals in every contest for which data are available.2

In six of the seven states where exit or entrance polling has been conducted, the polls asked voters about their religious affiliation (Protestant, Catholic, Jewish, Muslim, and so on). Romney won the Catholic vote by a margin of 25 or more points in three of these states and earned victories of 15 or more points among Protestants in three states. Rick Santorum, who has been Romney’s closest competitor in recent primaries and who is Catholic himself, has not won the Catholic vote in any state for which data are available. 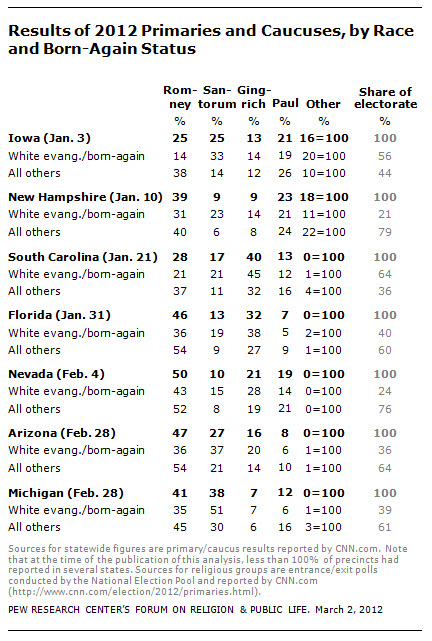 Exit and entrance polls that asked voters about their religious affiliation have been conducted in six states so far in the GOP primary season (this question was not asked in Iowa). In three of these states (New Hampshire, Nevada and Arizona), Romney won the Protestant vote. In Nevada and Arizona, Romney’s margin of victory among Protestants was significantly boosted by the presence of large numbers of Mormons in the electorate, who overwhelmingly supported Romney. (Typically, Mormonism is not considered a Protestant denomination by the Pew Forum on Religion & Public Life; exit polls, however, usually group those identifying as Mormon with Protestants.) Gingrich was the clear favorite of Protestant voters in South Carolina, while Protestants were closely divided in Florida (between Romney and Gingrich) and Michigan (between Romney and Santorum). 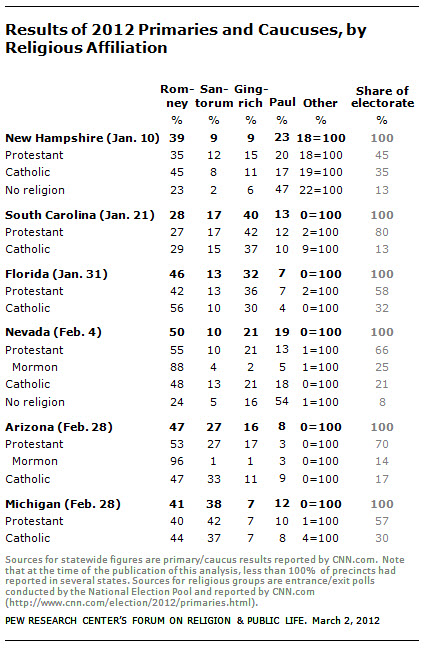 Romney won the Catholic vote by 25 points or more in New Hampshire, Florida and Nevada. In Arizona, 47% of Catholics voted for Romney, compared with 33% who supported Santorum. In South Carolina and Michigan, Catholics polled were more evenly divided (between Romney and Gingrich in South Carolina, and between Romney and Santorum in Michigan). As previously mentioned, Santorum, a Catholic who has been Romney’s closest competitor in recent primaries, has not won the Catholic vote in any state for which data are available.

This analysis is based on results from entrance and exit polls conducted as voters participated in the GOP caucuses and primaries in January and February 2012. The polls were conducted by Edison Media Research for the National Election Pool. Full results and additional details can be accessed at http://www.cnn.com/ELECTION/2012/primaries.html. This analysis is based on entrance and exit poll data that were available as of 4:00 p.m. on March 1. Exit and entrance poll data are sometimes reweighted, so some figures may be different from those available on CNN.com and from previously published Pew Forum analyses.

1 This does not include Missouri, which held a non-binding primary on Feb. 7. (return to text)

3 Voters can describe themselves in entrance and exit polls as born-again or evangelical Christians regardless of their religious affiliation, meaning that the born-again/evangelical category likely includes not only Protestants but also some Catholics and even some voters who say they have “no religion.” (return to text)

4 This average was determined by calculating the difference between Romney’s support among evangelicals and all other voters in each of the seven states for which data are available, adding them together and then dividing by seven. (return to text)