Previous Pew Research Center surveys have found that one common association that the general public has for Mormons is “family” or “family values.” This survey finds that family is, indeed, very important to most Mormons. Mormons are more likely than the general public to feel that marriage and childrearing are some of the most important things in life. More Mormons are married compared with the population as a whole, and Mormons have more children on average than the general public. Finally, Mormons hold traditional views of gender roles inside the family and in their religious community. 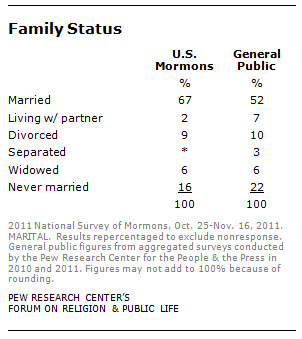 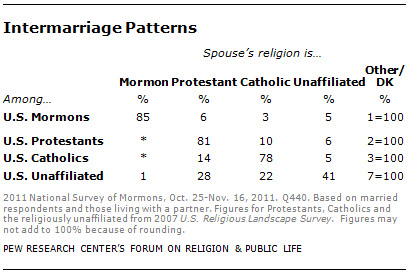 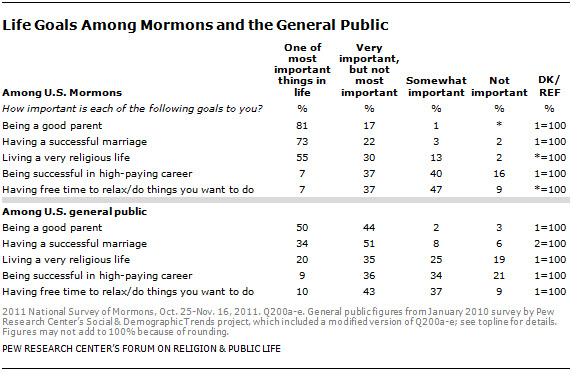 This prioritization of family life is seen across Mormon subgroups. Being a good parent and having a successful marriage rank as top priorities in life for both Mormon men and Mormon women, and for both the highly religious and those with lower levels of religious commitment. Married Mormons are more likely than those who are not married to say having a successful marriage is one of their most important goals in life, but more than half of those who are not married (56%) express the same view. Similarly, those who have had children are more inclined than those who have not to say being a good parent is one of the most important things in life, but large majorities of both groups express this point of view. 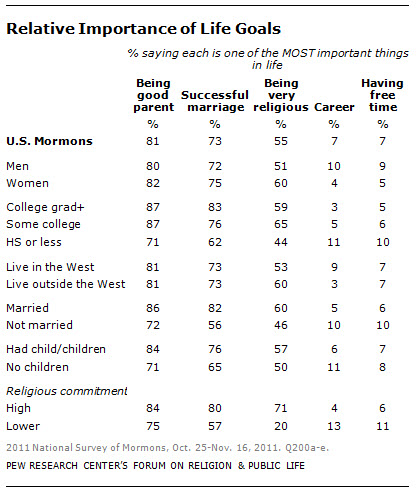 Those with higher levels of educational attainment are more likely than those with a high school degree or less to say that being a good parent, having a successful marriage and being very religious are among their most important goals in life.

Mormon men and women express similar views on this question, and there is no difference in views across age cohorts. Upwards of seven-in-ten Mormon college graduates (71%) say they prefer a marriage in which the husband is the sole provider, compared with 59% of those with some college education and less than half of those with a high school education or less (45%). This pattern is not observed among the general public. 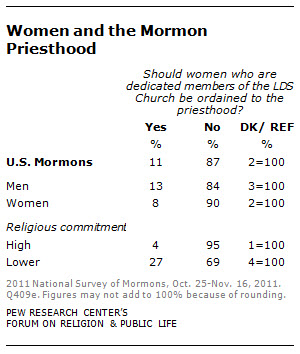 6 The estimate that 52% of adults in the general population are married comes from surveys conducted in 2010-2011 by the Pew Research Center for the People & the Press and differs slightly from a recent, comprehensive analysis of trends in marriage rates published by the Pew Research Center’s Social & Demographic Trends project, which was based on U.S. Census Bureau data. The Pew Research Center surveys were used for comparison in this report because the marital status question in those surveys is identical to the marital status question used in the current survey of Mormons. (return to text)

Next: Politics, Society and Morality
← Prev Page
Page1Page2Page3Page4You are reading page5Page6Page7Page8
Next Page →