The bipartisan U.S. Commission on International Religious Freedom released a report on May 2 that listed 11 “countries of particular concern” – countries whose governments have allowed or participated in violations of the right to freedom of religion or belief. Although the commission did not list Iraq as one of the 11 countries, it said it “remains seriously concerned about religious freedom conditions in Iraq.” The commission, which included Iraq on its 2007 watch list, also announced that its members would visit the country later in May and issue a report and recommendations. Senior Research Fellow Brian Grim discusses the religious freedom conditions in Iraq and explains that sectarian violence, ambiguous legal protections for religious freedom, and other factors have contributed to a deteriorating situation for Christians and other religious minorities. 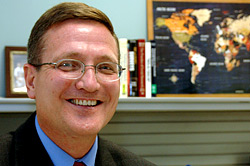 The bipartisan U.S. Commission on International Religious Freedom put Iraq on its watch list of countries that violate religious freedom in 2007. What were the commission’s concerns?

The commission added Iraq to its watch list in May 2007 because it felt that the nature and extent of the violations of religious freedom were not only severe but were tolerated by the government and, in some cases, committed by forces within the government. The commission clearly had hoped for a different outcome when it stated in a 2003 letter to President Bush that “the United States can help [religious freedom in Iraq] become a reality.” The commission did not name Iraq as a country of particular concern (CPC) in 2007 “with the understanding that it may designate Iraq as a CPC [in 2008] if improvements are not made by the Iraqi government.”

Many experts consider the situation for Christians in Iraq as especially dire. According to Chaldean Catholic Auxiliary Bishop Andreos Abouna of Baghdad, their numbers may have been cut in half since 2003, to about 600,000. As documented by the U.S. State Department, Christians have been threatened with violence if they do not leave their homes, accosted on the streets and even assassinated, and their churches have been bombed or destroyed. Some Iraqi Christian leaders go so far as to describe the plight of Christians in Iraq as ethnic cleansing.

Why have their numbers decreased so much?

When the choice is between risking death and getting out of the country, many choose to leave. Until recently, 3 percent or more of the Iraqi population was Christian. These are historic communities of indigenous Christians who have been in what is now Iraq nearly since the time of Christ, several centuries before Islam came to the region. The majority of them are Chaldean Christians who have been affiliated with the Roman Catholic Church, which may help to explain why Pope Benedict XVI is so concerned.

Christians have been targeted since 2003 as part of the violence that has spread throughout Iraq. The worst violence has been in regions with diverse ethnic and religious groups, such as Baghdad and Mosul, where the majority of Iraq’s Christians live. For example, the State Department reported last year that Muslim extremists “warned Christians living in Baghdad’s Dora district to convert, leave or be killed.” The report documented that many Christians have been driven out of these areas. The threat of violence or even death appears to have been an extremely potent motivator to get people to leave.

The State Department also reported last year that “government policy and practices generally did not interfere with the free practice of religion.” But the report also said that the insurgency had adversely affected all religious believers and that “sectarian misappropriation of official authority within the security apparatus” had impeded religious freedom.

When Christians leave Iraq, where do they go?

Most have gone to the neighboring countries of Syria and Jordan. Fewer have ended up in Western countries.

What is the situation of other religious minorities in Iraq?

Reports indicate that their situation is equally bad and, for some, even worse. One thing the Christian community has going for it is that it is connected to international communities that can advocate for it, as the pope has done. But that is not the case with some of the other groups, such as the Yazidis, who are considered heretical by many Muslims because they have a syncretistic blend of Islam and other religions. There is neither an international Yazidi community nor foreign countries that have Yazidis as a majority population, so they are more or less on their own.

Another targeted group, the Sabian Mandaeans, have been in Iraq for many, many centuries. The Mandaean religion is independent of Islam, Christianity and Judaism, but it follows the teachings of John the Baptist, with baptism being a central ritual. Sabian Mandaeans in Iraq numbered about 60,000 in 2003; today there may only be about 5,000 left in Iraq, meaning that more than 90 percent have left the country or been killed.

What are some of the underlying factors contributing to the plight of religious minorities in Iraq?

Religious freedom depends on having three things: First, a society that values religious freedom and religious diversity; second, unambiguous legal provisions for religious freedom; and third, government policies that aggressively guard religious freedom. I think all three of those things are under threat in Iraq today. During their visit to Iraq, the commission will particularly be looking at whether the Iraqi government is achieving the third, and their findings will determine whether they move Iraq from the watch list to a CPC in their eventual report.

Do religious minorities have more or less freedom now compared with when Saddam Hussein was ruling Iraq?

A fair statement is that it was not good then and it is not good now. Under Saddam, different groups faced the fire, and any group that threatened him was ruthlessly suppressed. The most infamous example is the Anfal campaign of the 1980s in which the regime used chemical weapons in northern Iraq to kill thousands of Kurds, an ethnic group that predominantly practices Sunni Islam. However, it was the majority Shiite population that faced the biggest problems under Saddam. Following the first Gulf War in 1991, the Shiites actively opposed him, so they were severely persecuted during his regime, ranging from the prohibition of religious practices to violent suppression. In 1991, for example, tank units attacked the Shiite holy cities of Karbala and Najaf, with many thousands of Shiites reportedly being killed.

The situation for Christians, however, is much direr now than it was then, according to reports. Christians used to live with less danger of imminent violence in Iraq, as long as they did not interfere with the regime’s political agenda. But they were far from free. For example, when they were suspected of collaborating with the Kurds in the 1990s, they were forced to relocate. Still, Christians operated seminaries, Christian children received religious instruction in state schools having a Christian majority, and the Vatican had diplomatic relations with Iraq.

Christians generally kept a low public profile, however. For example, one of the public faces of that regime was Tariq Aziz, the deputy prime minister who was of Chaldean Catholic background. His birth name was Mikhail Yuhanna, a Christian name, but he changed it to a name that sounded Muslim to avoid being associated with Christianity. So the situation for religious minorities was difficult then but for different reasons than it is now.

What does the new Iraqi constitution say about religious freedom?

Iraq has a problem in its constitution similar to that of Afghanistan. You may remember that back in 2006 there was an Afghani by the name of Abdul Rahman who was tried and faced the death sentence for converting from Islam to Christianity. The world was surprised at that because Afghanistan’s constitution guarantees religious freedom. But the country’s constitution also states that no law can be contrary to the beliefs and provisions of Islam. It was under that second provision that Rahman was tried in the court system and faced the death penalty for converting from Islam. He was eventually granted asylum in Italy.

The Iraqi constitution contains similar guarantees of religious freedom, but it also has what some have termed a “repugnancy clause” that is similar to what is found in the Afghani constitution. Article 2 of the Iraqi constitution states, “No law that contradicts the established provisions of Islam may be established.” In addition, Article 89 states that the Iraqi Federal Supreme Court will include experts in Islamic jurisprudence, which means that the repugnancy clause is backed up by a court system with people employed to interpret Islamic law. So you have the guarantee of religious freedom on the one hand, but at the same time the stipulation that no law can contradict the teachings of Islam. Many people see this as a troubling contradiction.