The Washington State Supreme Court today ruled, 5-4, that the state constitution does not guarantee a right to same-sex marriage. The decision came after 19 gay and lesbian couples sued to overturn Washington’s Defense of Marriage Act, a 1998 law limiting marriage to heterosexual couples.

The Pew Forum provides answers to the following questions. 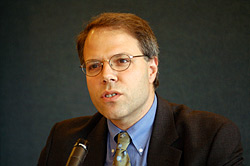 On what grounds did Washington’s high court base its decision?

The court majority determined that the Washington State Constitution does not give gay couples a fundamental right to marry and therefore the state’s Defense of Marriage Act is constitutional. In cases such as this, where a law does not impinge upon a fundamental constitutional right, a court can only invalidate that law if there is no legitimate government purpose or “rational basis” for it. In this case, the court determined that there were a number of possible rational bases for the state’s Defense of Marriage Act.

“The legislature was entitled to believe that limiting marriage to opposite-sex couples furthers the State’s legitimate interests in procreation and the well-being of children,” wrote Justice Barbara Madsen in the majority opinion.

This rationale roughly mirrors that used by New York’s highest court, which, earlier this month, also ruled that its constitution does not guarantee a right to same-sex marriage.

Taken together with the New York decision, what does today’s ruling mean for supporters of gay marriage?

Both decisions, coming within less than a month of each other, are a major setback to advocates of same-sex marriage. Forty-four state legislatures have passed Defense of Marriage laws and nearly half of all states have amended or are poised to amend their constitutions to ban gay marriage. So, many in the gay marriage movement have come to see state courts as the best avenue for advancing their agenda, especially following the 2003 decision by the Massachusetts Supreme Judicial Court mandating same-sex marriage. Indeed, advocates of gay marriage were hopeful that courts in “blue states” like New York and Washington would join Massachusetts in declaring bans on same-sex marriage unconstitutional.

Does this decision impact anything the Washington state legislature might do regarding gay marriage?

No. The court in Washington makes it clear that the decision to ban or allow same-sex marriage remains in the hands of the legislature or directly in the hands of the people, through the ballot initiative process. The ruling preserves the status quo.

Is this decision in line with public opinion on gay marriage?

According to a June 2006 poll by the Pew Research Center for the People and the Press, 55% of the American people oppose gay marriage. That number is lower than the 59% who opposed same-sex marriage in a March, 2004 Pew survey.