On July 7, 2006, the Pew Global Attitudes Project released an international survey focusing on Muslim and Western perceptions of each other and on the Muslim experience in Europe. The poll surveyed more than 14,000 people in 13 nations: India, Egypt, Indonesia, Jordan, Nigeria, Pakistan, Russia, Turkey, the United States, Britain, France, Germany and Spain. A survey of Muslim populations in the four European countries was conducted in partnership with the Pew Forum on Religion & Public Life.

In a wide-ranging interview at the Pew Forum on Religion & Public Life, Amaney Jamal, assistant professor in the department of politics at Princeton University and a specialist in the study of Muslim public opinion, commented on the survey’s findings and their implications. Jamal is also a senior advisor for a Pew Research Center project on a comprehensive study of the views and attitudes of Muslim Americans. The Forum is a partner in this year-long survey project, which will be completed by next summer.

In the interview, Jamal discusses, among other things, the negative perceptions Westerners and Muslims have of each other, the role of the media in perpetuating stereotypes and what the findings mean for U.S. foreign policy. 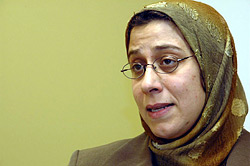 Do the results of this survey, as you look at them, reveal a growing divide between the Islamic and Western worlds?

The results certainly reveal that there is a divide. Whether it’s growing or not is not very clear, however, because we don’t have very good data across time in all these countries. Where there is systematic data across time, we tend to see that attitudes have remained pretty constant.

Were there any survey results you found particularly encouraging in terms of bridging the divide?

Is it encouraging that we still have these decades-old stereotypes emanating both ways: the West versus the Muslim world, and the Muslim world versus the West? No, it is not encouraging at all. Actually, it’s quite disappointing. It’s more disappointing if you look at the fact that it is in the United States’ strategic interest in the region to win the hearts and minds of people in the Muslim world. U.S. troops are on the ground in Iraq. Where there is a need for U.S. involvement and U.S. mediation of conflicts, such as the Arab-Israeli and Afghanistan conflict, there is a total loss of trust in the Muslim world of all things American or Western. This also hurts our ability to deal with issues and problems diplomatically because there is this huge tension.

On the topic of democracy and Islam, you do see some hope in the survey findings from Western Europe. Are you optimistic there?

What we see among the Western European Muslim population is great enthusiasm reflected in percentages of more than 75 percent and 80 percent of people who believe Islam and democracy are compatible. That’s because they are living experience and proof of the compatibility of the two. They are maintaining a cultural, religious tradition, and also enjoying the freedoms of democracy.

What, in your view, is working and what isn’t, to increase communication and dialogue between the Islamic world and the West?

The U.S. has acknowledged the problem and that’s why it is funding an Arabic language satellite television network for the Middle East. But we’re not doing much to combat the stereotypes that exist. Muslims want Westerners to think of them more respectfully, to think of them as equals. Westerners don’t see Muslims as thinking similarly to them. When it comes down to it, humans think alike, but we have to listen to one another more carefully. That type of communication is missing. 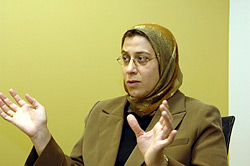 What stereotypes are you seeing?

If we were to survey popular movies that have captured the interest of Muslims and Americans that come out of Hollywood, the pattern in those movies is often of a fundamentalist Muslim raging wildly for some lunatic reason.

The same pattern of portraying the Muslim “other” can be seen in the findings of the Pew survey. Again, Muslims are not seen as tolerant. They are seen as fanatics, not respecting democracy. And yet, if you deal with Muslims on a daily basis — and I don’t say this because I’m Muslim — you see this is not the reality.

I’m also saddened by the fact that Muslims also tend to misunderstand what Westerners are all about: They see Westerners as arrogant, greedy and selfish — through the lens of colonialism.

The more erroneous and pervasive these stereotypes, the more justification it gives people to hold images of the other as less human, which ultimately leads to conflict. Once you dehumanize another people, it becomes easier to use a military option against those people.

You say that neither the Muslim world nor the West see the moderate middle in the other. What role is the U.S. media playing in perpetuating this problem?

If we examine what type of news is being broadcast from the U.S. to the Muslim world we are likely to see statements that come off as anti-Islamic, as implicating an entire religion. You are likely to get statements, however irresponsible, that there is this ongoing rift between Christianity and Islam. 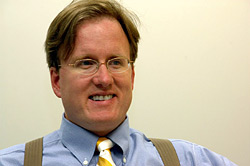 How do you see Islamic media portraying the West?

As a society obsessed with sex, drugs and alcohol, a society that doesn’t understand the larger meaning in life. And there is nothing further from the truth. When you know Americans and Westerners and you know about their values, they’re very committed to many of the same values that Muslims take pride in holding and cherishing.

The survey shows that Muslims in Muslim countries view the West as immoral. Is this an Islamic perception of Western culture gleaned from movies, TV and the Internet, or a perception of government policy, such as the Iraq war? Or is it a combination of factors?

I think it’s certainly a combination. I think Muslims know the West through the type of shows and movies that are broadcast in the region. The type of movies that will sell are those that are either overtly violent or tend to be more sexual. That’s unfortunate.

Muslims then think that American culture stands for alcoholism and relationships that are outside of the boundaries of marriage. Those are still big taboos in the Muslim world. So you’re dealing with a very conservative, traditional society on these issues. And what they see from the West is basically the flaunting of these immoral acts in the media.

Muslims also hear news stories of teenage pregnancy and child molestation, and these stories are given increasingly more attention in the Muslim press than they are even here. In the minds of Muslims, you have this sad civilization in the West that is trying to dictate to the rest of the world how to live their lives. There is a strong conviction that the Western world does not have the moral foundation to be dictating to Muslims how to lead a decent life.

Look at the last year of news coverage coming out of the Middle East. Who has been covered in Western media? Hamas spokespeople, the Iranian president; Osama bin Laden, Ayman al Zawahiri and that little video of Abu Musab al Zarqawi when he was killed. What other speakers or images from the Muslim world have we seen? Have we seen intellectuals? Have we seen researchers? Have we seen thinkers? Have we seen ordinary people on the street?

As you point out, and as the data point out, support for bin Laden is falling in the Muslim world. Yet it is almost as if the Western media has still “elected” him as an evil icon. In the Arab Muslim world, where we tend to see the highest levels of anti-Westernism, bin Laden has never really enjoyed solid support. Yet he has become an icon to the West, and that is a great concern. It affects and angers Muslims, and it also frightens Westerners. It reifies the divisions. 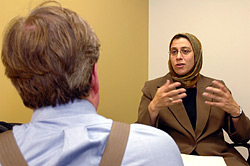 The survey shows declining support for terrorism in some Muslim countries. For example, we see a significant drop in support for suicide bombings in Pakistan and Jordan between 2004 and 2005. What explains this drop and do you think this represents a lasting development?

The Muslim world has come to understand that if you support suicide bombings, there may be attacks targeting your own people. In addition, they see the daily images emanating out of Iraq, the senseless loss of life due to suicide bombings in marketplaces, mosques and whatnot. These images are having a huge effect across the Muslim world. Muslim suicide bombers are killing other Muslims, and I think a lot of people are beginning to question what is going on in the lives of suicide bombers.

This is one of those topics that have to be dealt with and negotiated internally within Muslim societies. If you give Muslims this opportunity to learn through trial and error, we see that they are rational people who have rational interests and regard for human rights.

The survey shows there is no common view of Muslims in Europe. Great Britain, for example, seems to have a much more negative view of Muslims than France. What explains this difference from country to country?

I think each European country’s view of its Muslim minority population is really contingent on the relationship the country has had with their Muslim communities and with the broader issue of immigration. For example, Britain has just emerged from the July 7, 2005, bombings.

France has a better relationship with the Muslim community because it has a better understanding and a more favorable opinion about immigration. Therefore, it will have a more favorable stance toward Muslim immigrants. Also, remember that France just emerged from the riot issue last fall, and there is a lot of questioning, self-doubt and almost guilty feelings about the Muslim population.

We’re fast approaching the fifth anniversary of 9/11, yet a majority of the public in several Muslim countries, including 65 percent in Indonesia, does not believe Arabs were responsible for the attacks on New York and Washington. What, in your view, explains this?

In parts of the Muslim world, there’s a sense of victimization and the feeling that 9/11 epitomizes the culmination of Western imperialism. In their opinion, 9/11 set the stage for the U.S. invasion of Iraq, for complete U.S. domination of the region. The U.S. needed a reason, a justification, to go into Iraq and 9/11 provided it. People from these regions believe this.

People wonder how 19 hijackers ordered and directed by a man in a cave can attack the largest nation, which also owns a vast military arsenal. They say it’s simply impossible, that the U.S. wanted it to happen so it could set the stage for complete domination of the region.

They believe the U.S. doesn’t care about people, doesn’t care about their religion and that, in fact, implicating their religion serves U.S. interests in a grandiose fashion. That, I think, is what’s more remarkable about this disbelief about 9/11. It’s not that Muslims are in denial, or however you want to characterize it. It is that there’s no trust. The only thing that they understand about the West is that the West is out to get them.