Ahead of the first caucuses and primaries of 2020, Joe Biden enjoys a narrow lead as Democrats’ top choice for president. In an open-ended question, 26% of Democratic and Democratic-leaning registered voters volunteer Biden as their top choice for the nomination. Slightly fewer say Bernie Sanders is their first choice (21%), while 16% say they would like Elizabeth Warren to be the nominee. Pete Buttigieg (7%), Michael Bloomberg (5%), Andrew Yang (3%) and Amy Klobuchar (2%) receive support from smaller shares of Democratic voters.

There continue to be notable demographic differences among Democrats in their primary preferences, particularly by age, education, and race and ethnicity. However, there are no significant gender differences in the preferences of Democratic voters.

In addition to support among older Democrats, Biden continues to receive strong support from black Democrats. Overall, 36% of black Democrats name Biden as their first choice; far fewer name Sanders (13%) or Warren (9%). The preferences of Latino Democrats are divided: 30% favor Sanders, while 22% back Biden and 11% support Warren.

Among non-Hispanic white voters, there are only modest differences between the shares who support Biden (24%), Sanders (21%) and Warren (19%) for the nomination.

The age differences in candidate support are evident among whites, blacks and Hispanics. For example, while Biden draws the support of just 12% of non-Hispanic white Democrats under the age of 50, a third of whites ages 50 and older support him. Similarly, Biden’s support is greater among blacks and Hispanics ages 50 and older than among those under 50. (See detailed tables for a more granular examination of Democrats’ preferences, including among smaller demographic subgroups).

Warren runs relatively well among Democratic voters who have graduated from college, particularly those with a postgraduate degree. Among postgraduates, 28% say Warren is their first choice for the Democratic nomination; about as many name Biden (25%), while 13% name Sanders and 11% name Buttigieg. Among those with a four-year college degree (but no postgraduate degree), Sanders (23%), Biden (22%) and Warren (20%) all receive similar levels of support. Biden runs better than other Democratic candidates among Democratic voters with no college experience. 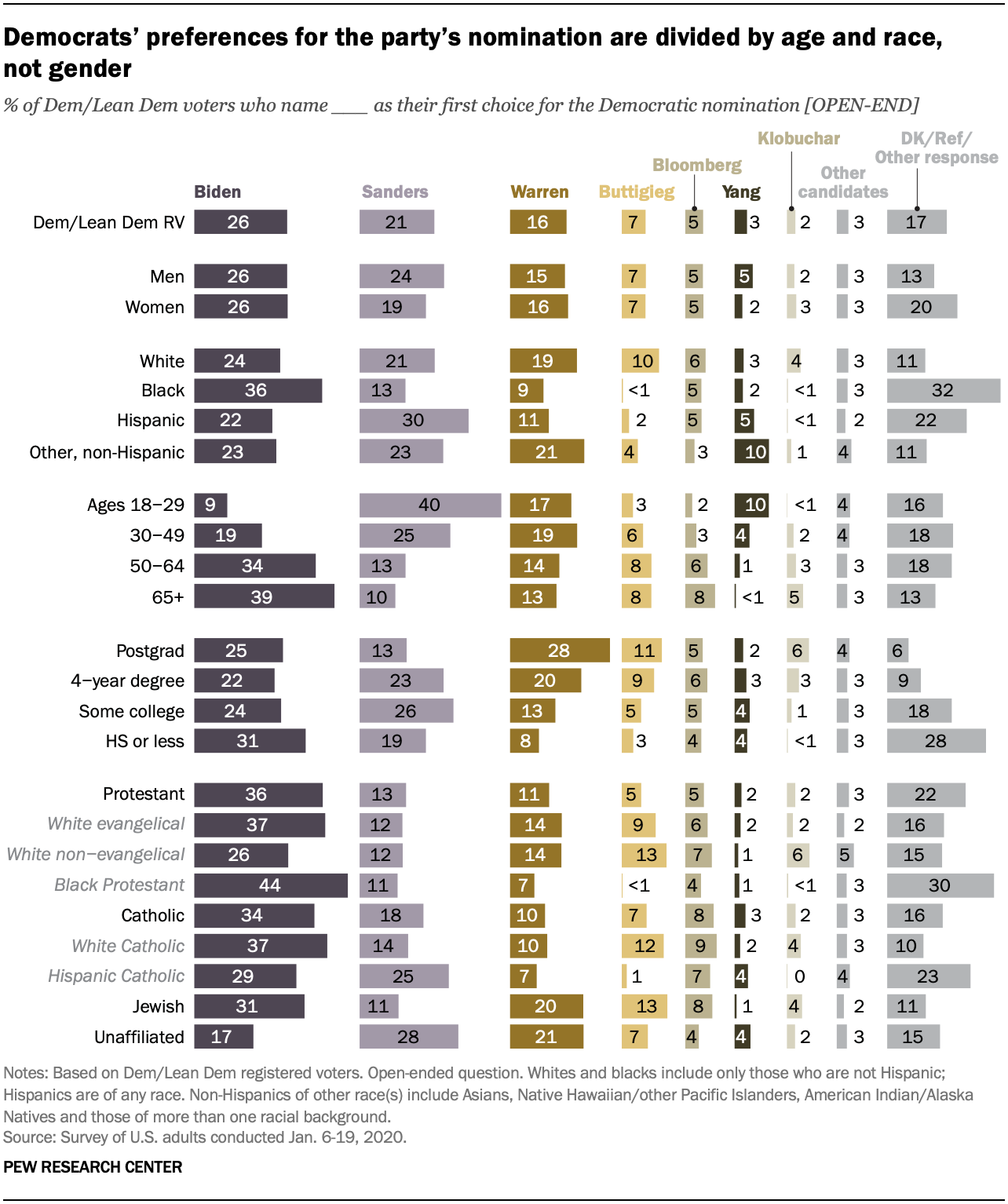 Demographic differences in candidate preferences create distinct coalitions of supporters for the 2020 Democratic candidates. For instance, 74% of Warren supporters and 61% of Sanders supporters describe their political views as liberal, compared with just 37% of Biden supporters. 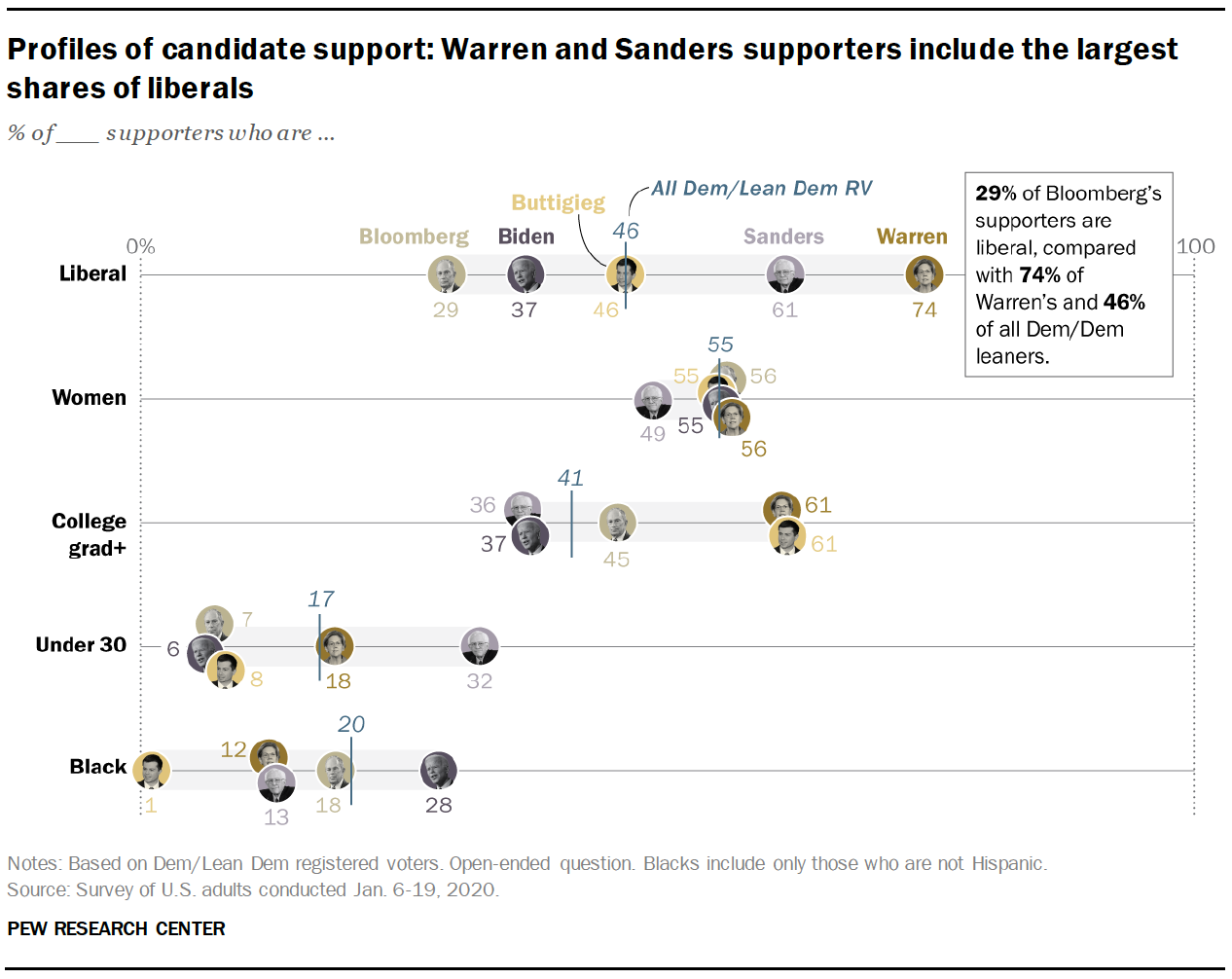 Majorities of Warren and Buttigieg supporters (61% each) have four-year college degrees. Fewer than half of Biden (37%) and Sanders (36%) supporters are college graduates.

When asked about their second choice for the nomination, 21% of Biden supporters name Sanders while 15% name Warren. However, a relatively large share of Democratic voters (36%) who support Biden do not volunteer a second choice. 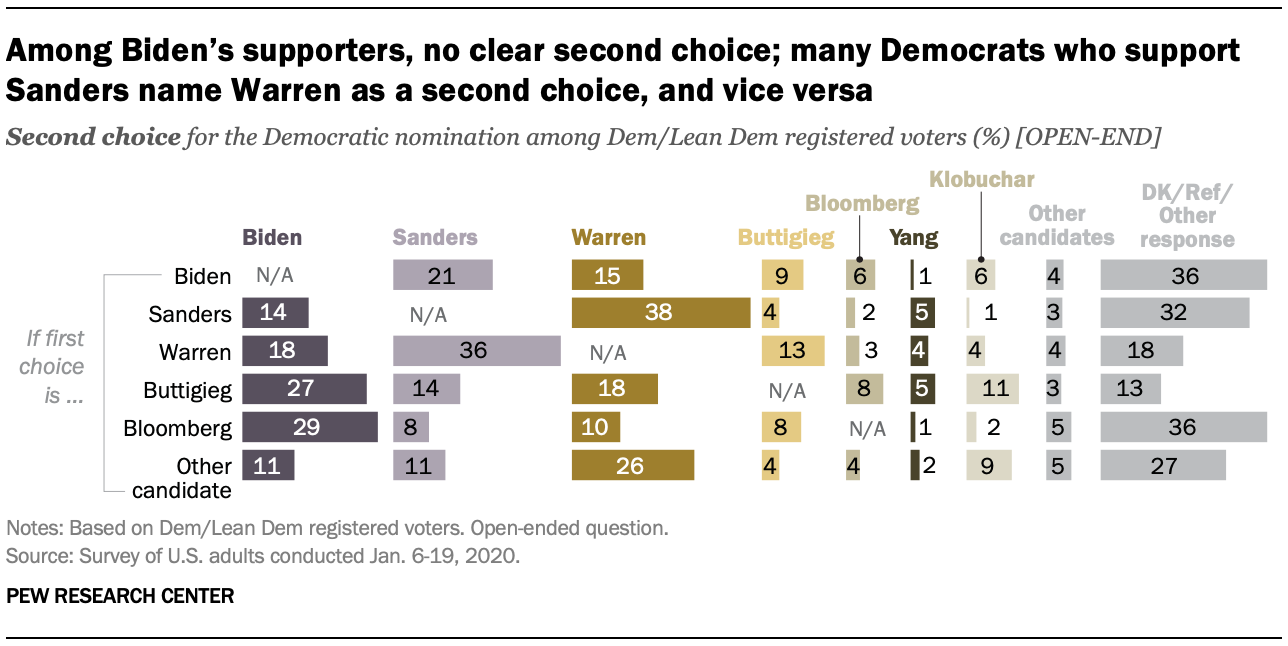 Among those who consistently supported Sanders in 2016, 44% favor him for the nomination today, while 25% support Warren.

And among the larger share of Democrats whose preferences were less consistent in late 2015 and early 2016, a third now support Biden, while 17% favor Warren and 13% back Sanders. 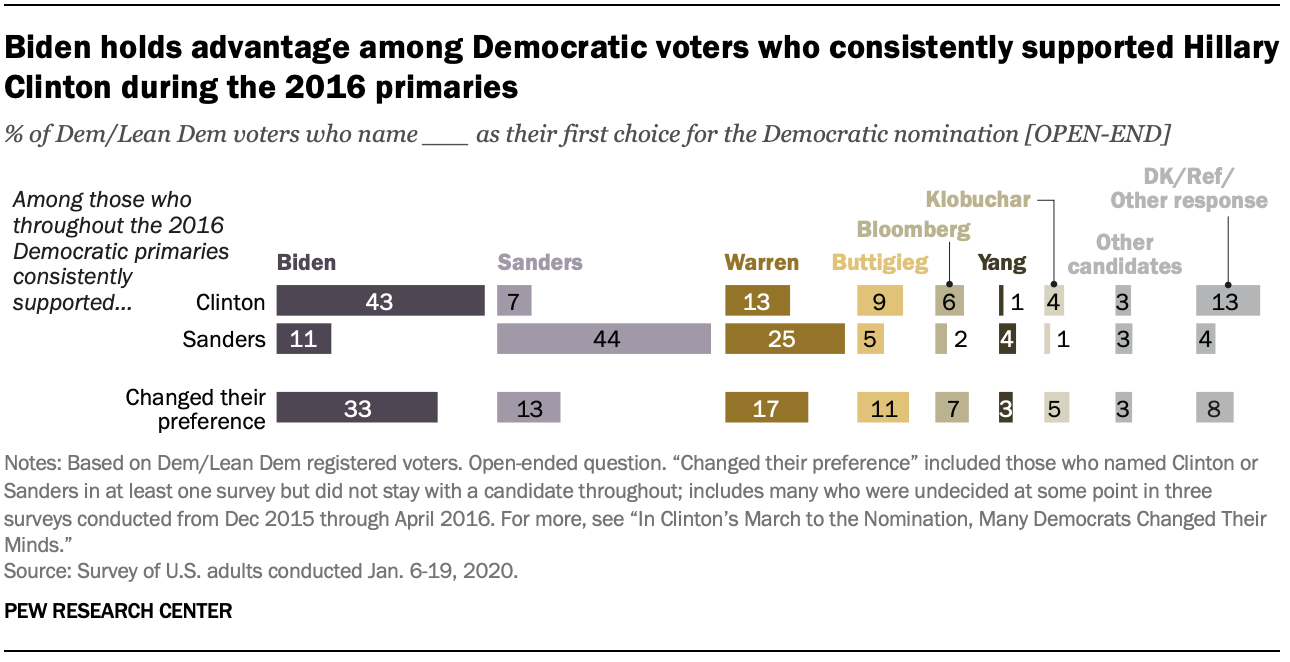 Democrats’ enthusiasm for their first choice and the field 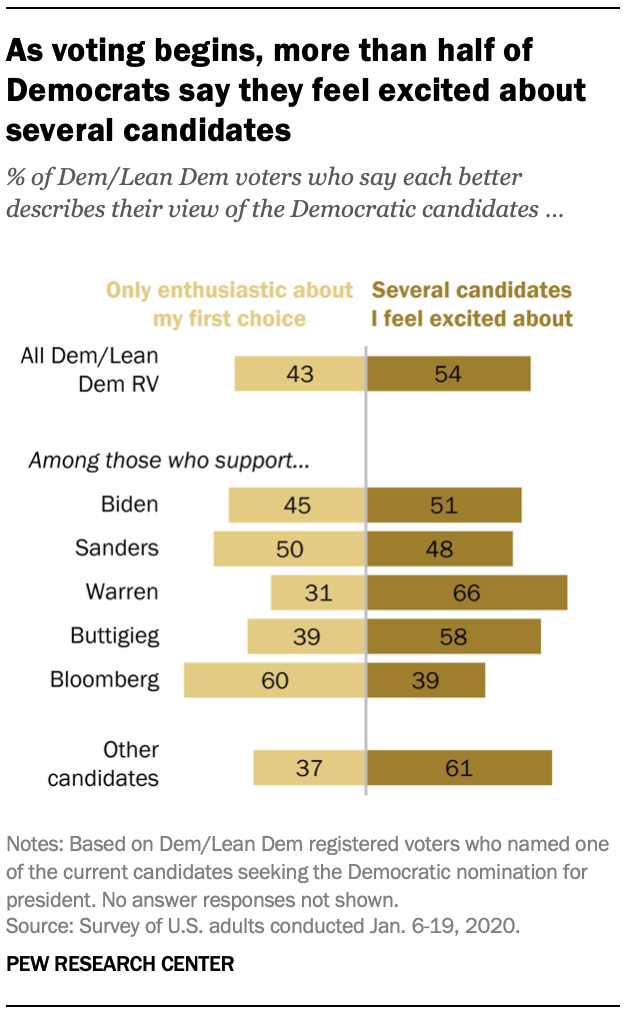 Overall, 54% of Democratic and Democratic-leaning voters who express a preference for a 2020 candidate say there are several candidates running for the nomination they feel enthusiastic about; a somewhat smaller share (43%) say they are only enthusiastic about their first choice.

As the Democratic primary contest has progressed, the share who say they are only enthusiastic about their first choice has increased eight points, from 35% in August 2019.

Views on this question vary by candidate preference. Two-thirds of Warren supporters (66%) say there are several candidates they feel enthusiastic about, 58% of Buttigieg supporters also take this view. Enthusiasm for candidates outside their first choice is somewhat lower among those who say their top choice is Biden (51%), Sanders (48%) or Bloomberg (39%).