Hillary Clinton led Bernie Sanders for the Democratic nomination in every Pew Research Center survey conducted throughout the party’s primaries. But many Democratic voters vacillated in their candidate support throughout this period. 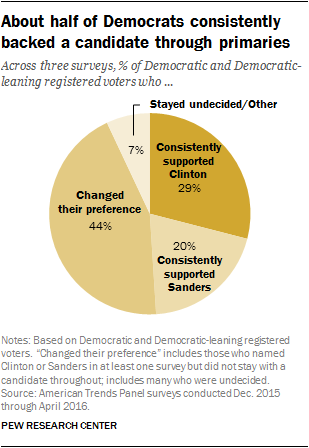 Today, however, overwhelming shares of all Democratic and Democratic-leaning registered voters – including 90% who consistently supported Sanders for the nomination – back Clinton in the general election against Donald Trump.

Even as Clinton led throughout, the share of voters who remained consistently loyal to her over the course of the election was far smaller than her overall support in any single survey. By April 2016, near the end of the Democratic primaries, Clinton was named the first choice of 46% of Democratic voters in an open-ended question about their nomination preferences. But only 29% had consistently named her their first choice in December 2015, March 2016 and April 2016. And even fewer, just 15%, had consistently named her their first choice going all the way back to March 2015.

This fluidity wasn’t confined to Clinton supporters: Sanders was the top choice of 37% of Democratic voters in April 2016, but only about half of these supporters (20% of all Democratic voters) consistently backed Sanders across the three primary-season surveys. Fully 44% of Democratic voters changed their preferences at least once in the surveys conducted over this four-month period, including those who may have been undecided at some point.

This report and accompanying interactive is based on a longitudinal analysis of the primary and general election preferences of Democratic and Democratic-leaning registered voters in Pew Research Center’s nationally representative American Trends Panel. This approach provides the ability to examine voters’ choices at an individual level over the course of six surveys conducted throughout 2015 and 2016. For more detail, see Methodology used in this report. And for a similar look at the GOP nomination contest, see “For GOP Voters, a Winding Path to a Trump Nomination.”

Patterns of primary support differ, but agreement on the general election 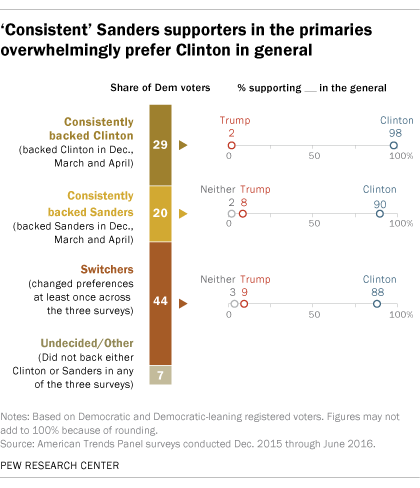 Despite a sometimes contentious primary process, support for Clinton in the general election is high among even the 20% of Democratic voters who consistently backed Sanders through the primary and caucus season: Among this group, just 8% prefer Trump in the general election, while 90% favor Clinton. (The survey was mostly completed before Sanders announced that he would support Clinton on June 24.)

Those who switched their support at least once from December to April also overwhelmingly back Clinton in a matchup against Trump (88% vs. 9%).

And those who consistently backed Clinton through the primaries are nearly unanimous in their support for her in the general: 98% say they will vote for her this fall. 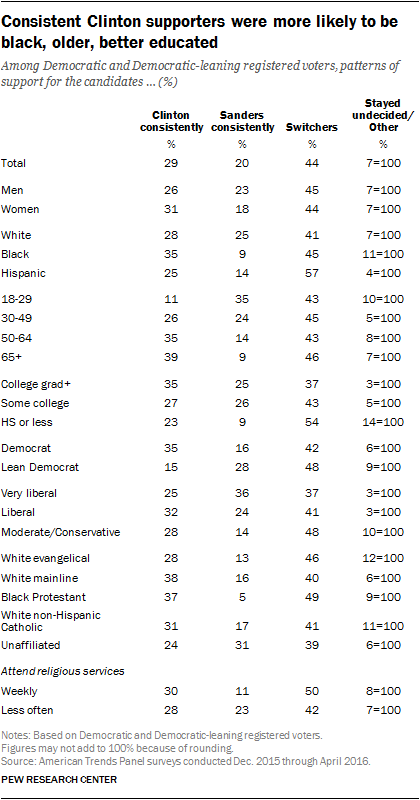 Women were more likely to be consistent supporters of Clinton than Sanders (31% vs. 18%), while men were more divided (26% consistently backed Clinton, 23% Sanders).

The age divide seen throughout the primaries is reflected here in differences in loyal support for Clinton and Sanders: While 39% of Democratic voters 65 and older consistently backed Clinton, just 11% of those under 30 did so. Conversely, 35% of those under 30 were consistent Sanders supporters compared with smaller shares of those in other age groups.

More Democratic college graduates (35%) than those with no more than a high school education (23%) consistently supported Clinton. And Democrats who affiliate with the party (rather than lean) were also more likely to be consistent Clinton backers in the primaries. Democratic leaners, those self-identified as “very liberal” and the religiously unaffiliated, were more likely to be consistent Sanders backers.

In March 2015, 10% of Democratic voters volunteered Elizabeth Warren as their top choice for the Democratic nomination, making her the second most popular choice (after Clinton, who was named by 41%). While she did not endorse either Sanders or Clinton in the Democratic race, early Warren supporters did have a preference between the two: More backed Sanders than Clinton in surveys over the course of the next year. 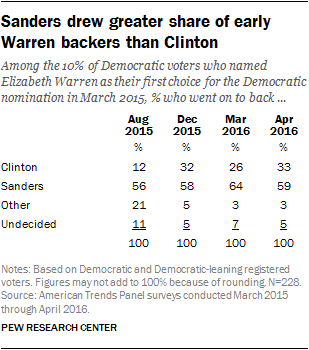 In the August 2015 survey, soon after Warren announced that she was not entering the presidential race, 56% of her prior supporters named Sanders their first choice; only 12% supported Clinton for the nomination while about two-in-ten (21%) preferred someone other than Clinton or Sanders and 11% were undecided.

Roughly six-in-ten of these prior Warren supporters backed Sanders in each individual survey through April 2016, including 38% who backed him in each of these subsequent four surveys. Though Sanders maintained a lead among this group, Clinton’s share of Warren supporters increased to about a third (32%) by December 2015 and remained at about that level in later surveys.

Today, an overwhelming majority of early Warren supporters (90%) say they prefer Clinton in the general election against Trump.

Democratic voters and the road to nominating Hillary Clinton

For GOP Voters, a Winding Path to a Trump Nomination
Contrasting Partisan Perspectives on Campaign 2016
Likely Rise in Voter Turnout Bodes Well for Democrats
As Voting Begins, Democrats Are Upbeat About the 2020 Field, Divided in Their Preferences
2016 Campaign: Strong Interest, Widespread Dissatisfaction