Many think America is experiencing a crisis in facts and truth, and they believe this problem ties into the current state of distrust people have in institutions. The Center recently reported that half of U.S. adults say made-up news and information is a very big problem in the country today, and about two-thirds say it causes a great deal of confusion about the basic facts of current issues and events. They also say made-up news and information has a big impact on Americans’ confidence in government (68%) and in each other (54%).

In this new survey we add to those insights, finding that the vast majority of adults say that Americans’ level of agreement on the basic facts about issues and events is a problem. Fully 85% of adults say this is at least a moderately big problem, including 42% saying it is a very big problem. In urgency, this issue ranks alongside Americans’ level of confidence in the federal government and the availability of affordable housing as problems that worry Americans. And it falls slightly above issues such as the quality of public K-12 schools and the condition of roads, bridges and public transportation across the country. 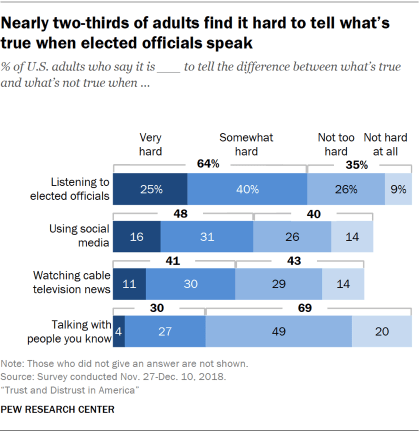 Americans believe the government could be more transparent with the public

Not only do Americans worry about made-up information and the lack of agreement on facts, they also think that key institutional information sources withhold useful information that could appropriately be shared with the public. 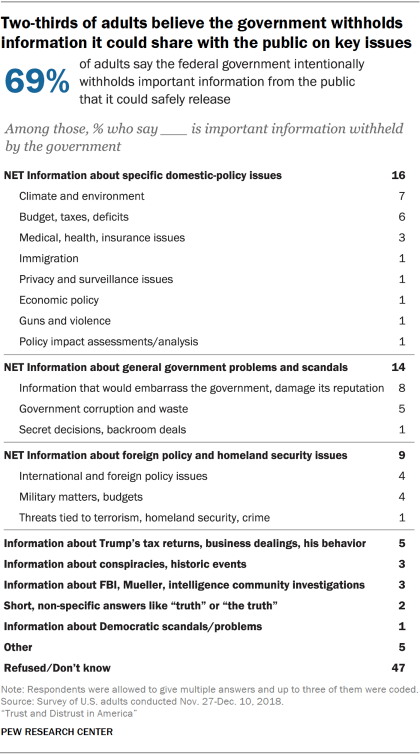 In written responses explaining their answers, respondents gave voice to a variety of suspicions about the information the government does not share, but should share. A 76-year-old man argued, “They are not honest about most of their activities since they think that they know more about what is good for the general public than we know for ourselves.”

Relatedly, a Baby Boomer wrote: “The government conveniently classifies information that could sway the public to be against certain actions or investigations. The government needs to be more open to the public and trust in their understanding.”

Some people believe the government’s motive for keeping information secret is to protect its reputation, rather than to protect important national interests. Said one Millennial: “I think the government withholds certain pieces of information pertaining to all large-scale disasters and attacks on America and intentionally avoids information that does not show them in a favorable fashion.”

One strain of thought involved people’s worries that the government knows a lot more about American life than it shares. One Millennial pointed to “[t]he general state of the country without bias, almost anything about Trump and his various scandals, objective information of any kind.” A generational contemporary put it this way: “Relevant statistics concerning economic trends and employment metrics, that are unflattering in light of their policies and preferred narrative”

Many Americans believe that news media coverage is one-sided

While partisans are relatively similar in their overall judgment that the media withholds some information, there is some disagreement about the severity of one-sided coverage. About one-in-five (19%) of those who gave written responses said that the news media is biased or focuses on opinions rather than facts. Republicans are more likely than Democrats to make this complaint (22% vs. 16%). This is in line with other findings by the Center documenting a higher level of concern among Republicans about one-sided coverage. Similar to what they feel the federal government withholds, 15% of adults say the news media does not cover domestic policy-related issues such as the justice system, crime, immigration, issues involving race and issues tied to climate. And 11% say that news media leaves out good news about Trump’s accomplishments and the economy. 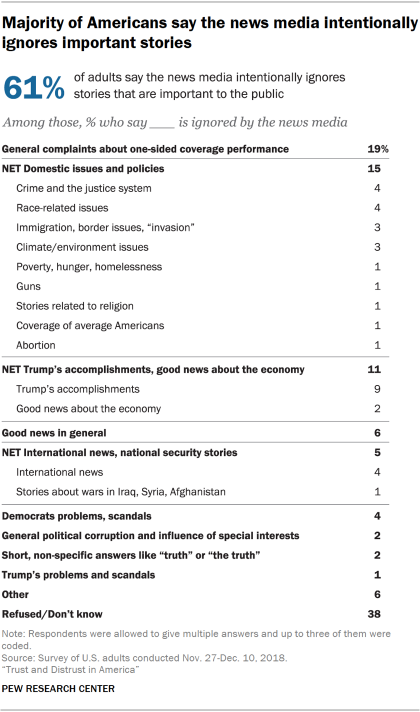 Republicans are also more likely than Democrats to say that news media ignores important stories about Trump’s accomplishments or good news about the economy (18% vs. 1%) and stories about Democrats’ problems and scandals. A statistically negligible number of Democrats complained about that, compared with 7% of Republicans.

That theme was covered by a 56-year-old man: “There hasn’t been a single positive story on President Trump. He’s the only sitting President to have met with a North Korean dictator, but it was spun as a negative by the media and the [Democrats]. He’s the only President who has attempted to address illegal Immigration effectively, but the media and [Democrats] spin it negatively. He’s a patriot who had a day job already and didn’t need the mess of the presidency, but entered into it as a citizen tired of the political crap that’s infected the nation…”

One typical comment about one-sided news coverage came from a 71-year-old woman: “The truth about any story they cover. The complete story and not just tidbits doled out on a hit-or-miss coverage. The ‘news’ reported consists more and more of gossip about individuals from the ‘entertainment’ industry as well as politicians and/or issues with which the media has bias. I frequently find myself asking questions about why I am hearing/seeing a story about some ‘entertainers’ divorce issues or a volcano eruption in Indonesia when neither of these has any direct impact on me and mine.”

For a number of respondents, the issue is not so much ignored news subjects as not-fully-covered stories. Wrote one: “I think that, as much as anything, they slant coverage to reflect their own opinions. Ignore may be a strong word, downplay might be a better or word and or it may be they just put more emphasis on the stories that reflect their leanings. I also think that this is reflected on the local level as well.”

Others said some specific issues are not fully covered. A Millennial man wrote, “Climate change is not given enough coverage. I believe looking at who a politician’s donors are is more illuminating than simply covering some speech they gave, and yet is never in the news. News media is a business and thus ignores stories that may affect purchasing of ad space either in their newspapers or during their commercials. This means we do not get a full picture of the news, only what they allow.”

The public’s lack of faith in the government’s and news media’s abilities to fully inform the public ties to the way Americans respond to various trust-related issues. For example, adults who say that the federal government intentionally withholds important information from the public are more likely than others to say that Americans’ trust in the federal government has been shrinking (80% vs. 63% among those who say the government does not release some useful information) and to say they are not confident that elected officials act in the public’s best interest (67% vs. 53%).

Similar patterns exist for adults who believe that news media intentionally ignores some stories that are important to the public. These adults are more than three times as likely as those who say news media makes their best effort to cover the stories that are important to the public to say that they are not confident that news media acts in the best interest of the public (71% vs. 22%). And 45% of those who say news media ignores stories also say that it is hard to tell the difference between what is and is not true when watching cable television news, compared with 35% of those who believe news media is doing their best.

Key findings about Americans’ declining trust in government and each other
An update on our research into trust, facts and democracy
Public Highly Critical of State of Political Discourse in the U.S.
Many Americans Say Made-Up News Is a Critical Problem That Needs To Be Fixed
How Americans View Government