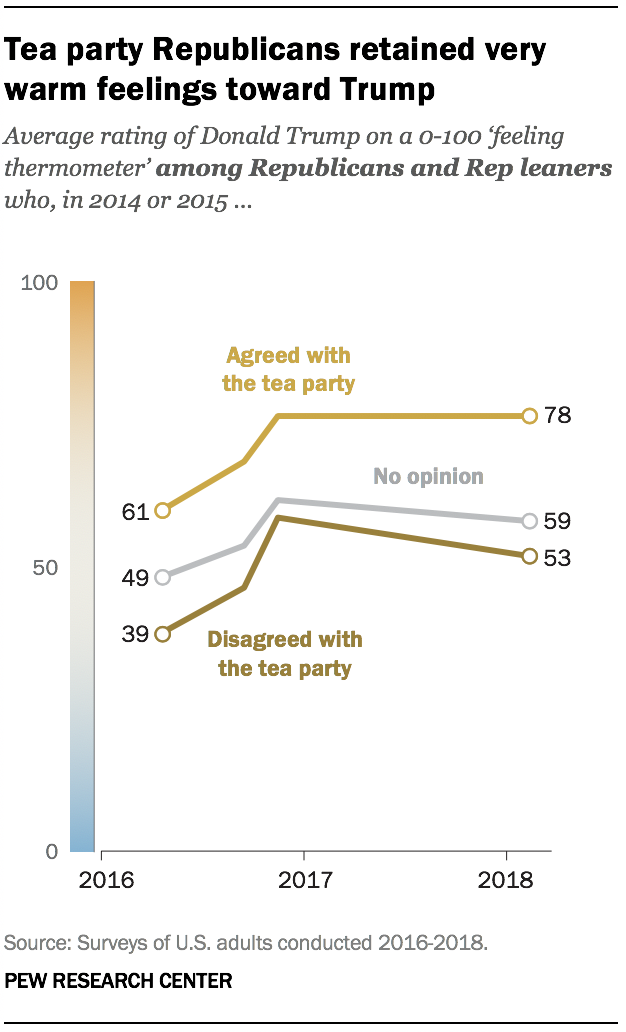 A decade after the tea party emerged as a political force, its former supporters are some of Donald Trump’s most stalwart Republican supporters, according to a new analysis of Pew Research Center panel surveys from 2014 through 2018.

At the height of the tea party, in 2010, about half of Republicans and Republican-leaning independents said they agreed with the movement, with roughly a third of Republicans continuing to say this over the next several years.

Leveraging the Center’s nationally representative American Trends Panel (ATP), this analysis explores the relationship between individual Republicans’ attitudes about the tea party several years ago – from surveys conducted in 2014 and 2015 – and their views about the GOP and Donald Trump through 2018, the last time this series of questions was asked of the same respondents (see Methodology for details). An expanded version is being presented at the 2019 conference of the American Association for Public Opinion Research.

In February 2018, those who had been Republican tea party supporters gave Trump an average rating of 78 on a 0-100 “feeling thermometer,” while Trump’s rating averaged 59 degrees among those Republicans who had no opinion of the tea party and was a much chillier 53 degrees among those who disagreed with the tea party. (Across all Pew Research Center surveys conducted in 2014 and 2015, 34% of Republicans and Republican leaners said they agreed with the tea party and just 11% disagreed, while the largest share – 53% – expressed no opinion.)

A gap in views of Trump between tea party supporters and those who disagreed with the movement was evident throughout 2016, both during the primaries and following the general election. That gap widened over the first year of Trump’s presidency. Although views of Trump grew more positive in each of these groups following his victory, there was no change in former tea party supporters’ views of Trump between November 2016 and early 2018. Meanwhile, Trump’s ratings among those who disagreed with the tea party or had no opinion moved in a more negative direction over this period.

The analysis in this report draws from surveys conducted with Pew Research Center’s American Trends Panel (ATP) to explore the association between individuals’ views of the tea party movement when they were first surveyed (in 2014 or 2015) and their attitudes about Donald Trump and the Republican Party in the years that followed.

This analysis is restricted to those individuals who were originally recruited from two large telephone surveys in 2014 and 2015 to join the ATP and remained active panelists through at least July 2017. The original surveys included the following question: “From what you know, do you agree or disagree with the tea party movement, or don’t you have an opinion either way?” The analysis looks at attitudes on other measures over the next several years. Because the same set of individuals are interviewed in each survey, changes in opinion can be tracked over time.

Virtually all Republicans and Republican leaners in 2015 who supported the tea party in 2014 or 2015 continued to align with the party as of 2018: 71% identified with the GOP, while another 26% leaned toward the Republican Party.

These tea party supporters were more likely than other Republicans to say that Trump’s election made positive changes in what the party stands for in a 2016 postelection survey.

And while it’s relatively rare for partisans to switch parties at all, this was more common among the subset of Republicans who had disagreed with the tea party or had no opinion. Among the small subset of those who identified with or leaned to the GOP in late 2015 and had disagreed with the tea party in 2014 or 2015, 15% identified as Democrats or leaned Democratic in 2018. A similar share (16%) of those who had expressed no opinion of the tea party in 2014 or 2015 had switched loyalties to the Democratic Party by 2018.

Views of tea party were associated with 2016 primary preference 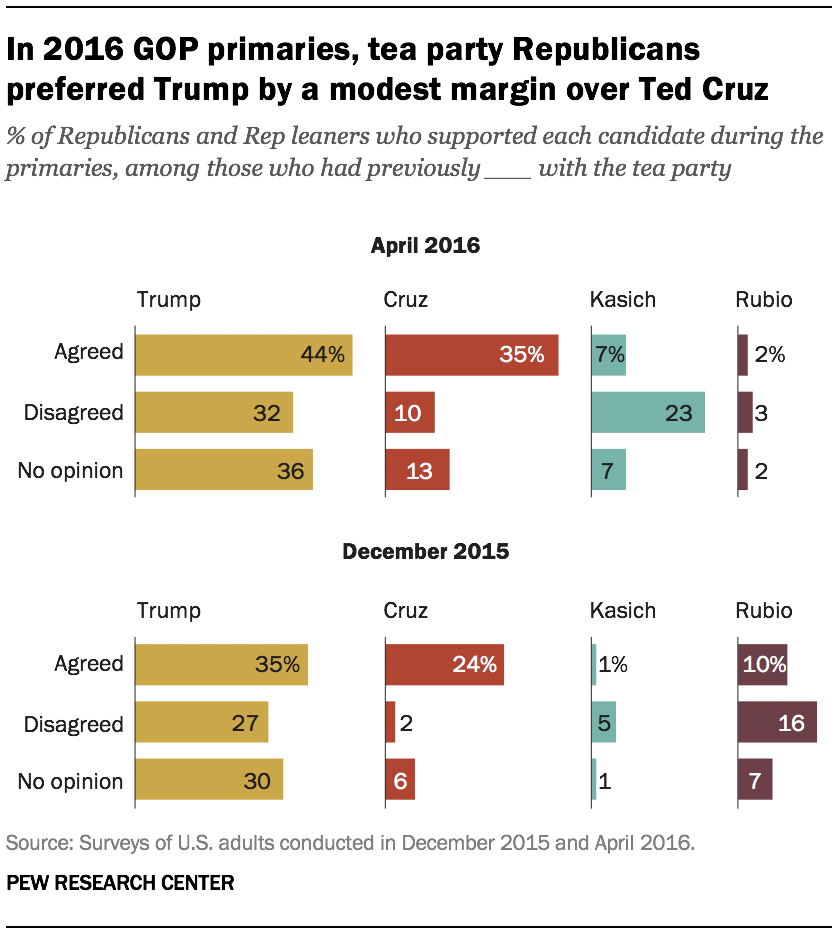 But those who had agreed with the tea party were more likely than other Republicans to say they wanted to see Trump get the 2016 GOP nomination, both in December 2015 and in April 2016.

Although the plurality of Republicans who had agreed with the tea party backed Trump for the nomination in both surveys, Sen. Ted Cruz of Texas enjoyed substantial levels of support from this group: 24% supported him in December 2015, while 35% did so in April 2016. Far smaller shares of other Republicans favored Cruz at either point. In contrast, Republicans who disagreed with the tea party were substantially more likely than other Republicans to back Sen. Marco Rubio of Florida in late 2015 and Ohio Gov. John Kasich in April 2016.

Next: Appendix: The trajectory of GOP views of the tea party
← Prev Page
You are reading page1Page2Page3
Next Page →

Trump’s Staunch GOP Supporters Have Roots in the Tea Party
GOP tea party supporters were most likely to remain in the partyViews of tea party were associated with 2016 primary preference
Appendix: The trajectory of GOP views of the tea party Methodology