The congressional elections are more than four months away, but voter engagement is high when compared with comparable points in previous midterm cycles. And a record share of registered voters (68%) say the issue of which party controls Congress will be a factor in their vote in November.

Compared with recent midterms, more voters also say their view of the president – positive or negative – will influence their vote for Congress. A 60% majority say they consider their midterm vote as essentially a vote either for Donald Trump (26%) or against him (34%). These are among the highest shares saying their view of the president would be a factor in their vote in any midterm in more than three decades.

In early voting intentions, 48% of registered voters say they would favor the Democratic candidate in their district, or lean toward the Democrat, while 43% favor the Republican or lean Republican.

The new survey by Pew Research Center, conducted June 5-12 among 2,002 adults, including 1,608 registered voters, finds that, unlike in recent midterms, voter engagement is high among members of both parties. Overall, 51% of registered voters say they are more enthusiastic about voting than usual, the largest share expressing increased enthusiasm about voting in a congressional election in at least 20 years.

A majority of voters who favor the Democratic candidate in their district (55%) say they are more enthusiastic about voting than usual, up sharply from 2010 and 2014. At about this point in 2006, when Democrats won majorities in both the House and Senate, somewhat fewer voters who backed the Democratic candidate (47%) said they were more enthusiastic about voting.

The survey finds that national political factors – views about partisan control of Congress and the president – are more important than in the past. Large majorities of voters who favor the Democratic (73%) and Republican (70%) candidates say the issue of which party controls Congress will be a factor in their vote. Again, the shares in both parties expressing this view are about as high as or higher than in recent midterm elections. 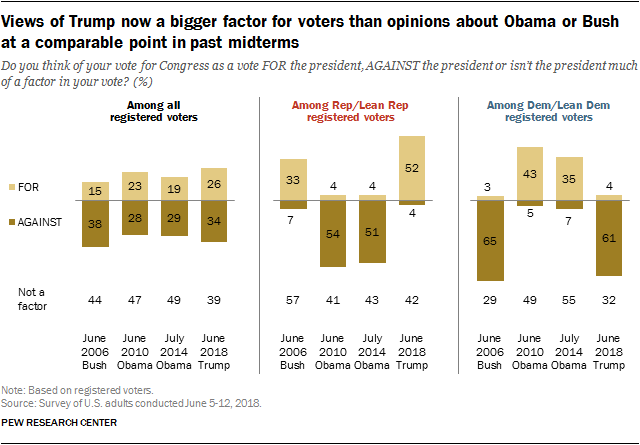 Here are some of the other major findings from the survey. (Also new today: Most Americans lack confidence in Trump to deal appropriately with Mueller probe.)

Trump job approval steady. In the survey, which was mostly conducted before Trump’s June 12 summit meeting with North Korean leader Kim Jong Un, 40% of adults say they approve of Trump’s job performance, little changed from earlier this year. Majorities say Trump has little or no respect for the nation’s democratic institutions and traditions (60% say this) and express little or no confidence in Trump to keep his business interests separate from presidential decisions (56%). 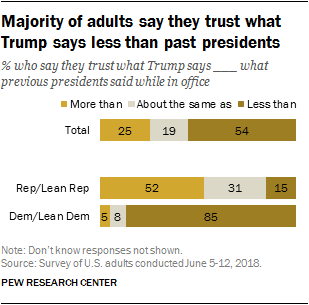 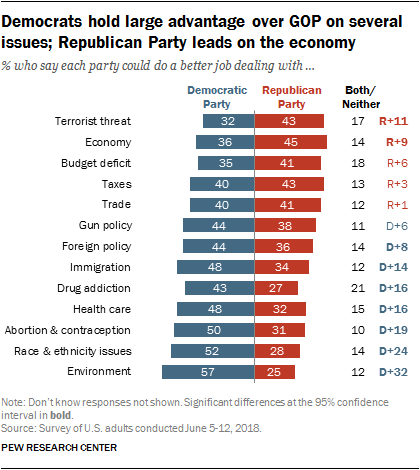 Democrats lead on several issues; GOP leads on economy. With the public’s views of the economy becoming more positive, the Republican Party holds a 45%-36% lead on dealing with the economy. Last October, the two parties were rated about even for handling the economy (38% Republican Party, 41% Democratic Party). The GOP once again has a significant lead on handling terrorism (43% to 32%); neither party had an advantage on terrorism in October.

On many other issues, however, the Democrats hold wide advantages. On both health care and immigration – two of the issues that voters mention most often as what they would like candidates to discuss – Democrats lead by 16 points and 14 points, respectively. 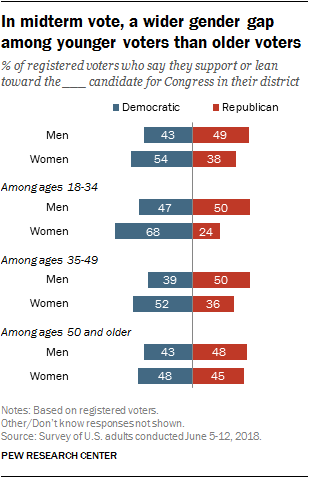 A wider gender gap among younger voters. Voting intentions for the midterm elections – and other political attitudes, including views of Trump – are deeply divided by education, age and gender.

Next: 1. Views of Donald Trump
← Prev Page
You are reading page1Page2Page3Page4Page5
Next Page →

GOP Has Midterm Engagement Advantage
GOP Likely to Recapture Control of House
Democrats More Eager to Vote, But Unhappy with Party
Biden Nears 100-Day Mark With Strong Approval, Positive Rating for Vaccine Rollout
What the data says about gun deaths in the U.S.
Quiz: Are you a Core Conservative? A Solid Liberal? Or somewhere in between?
What We Know About Gen Z So Far
Most Democrats and Republicans Know Biden Is Catholic, but They Differ Sharply About How Religious He Is