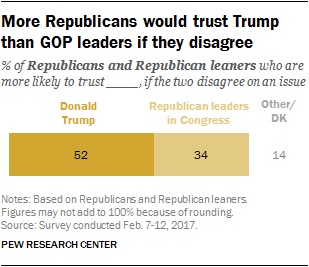 As President Trump prepares for his address next week to a joint session of Congress, Republicans say they are more inclined to trust the president, rather than GOP congressional leaders, if the two sides disagree. 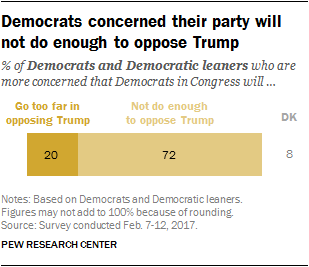 For their part, Democrats are far more concerned that congressional Democrats will not do enough, rather than go too far, to oppose Trump.

The latest survey by Pew Research Center, conducted Feb. 7-12 among 1,503 adults, shows how members of both parties are coming to grips with Washington’s changed political dynamics: 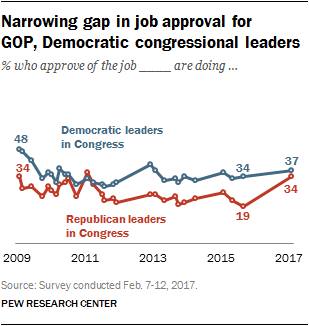 GOP leaders’ job approval improves. Job approval for Republican congressional leaders has increased sharply – from 19% to 34% – since September 2015. In contrast, there has been little change in Democratic leaders’ job ratings (34% then, 37% now).

The rise in approval of GOP leaders is largely attributable to a turnaround among Republicans: 68% approve of GOP leaders’ performance now; only 26% did so two years ago.

For most of the past six years Republicans have given GOP leaders in Congress relatively low approval ratings. Republicans have controlled the House since 2010 and took control of the Senate in 2014. 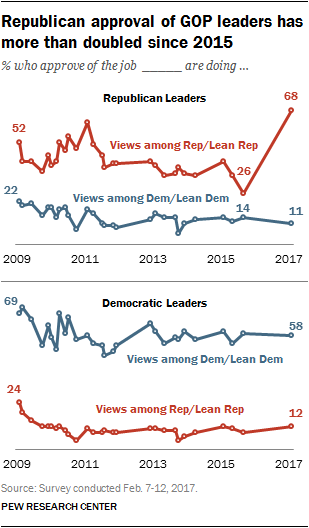 When it comes to favorability ratings for congressional leaders, none is viewed more favorably than unfavorably. 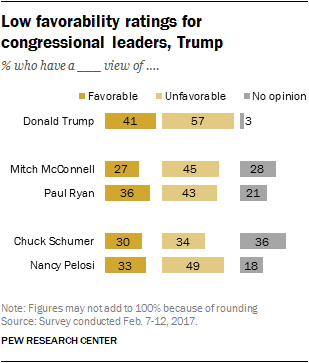 The public has mixed views of Paul Ryan (36% favorable, 43% unfavorable, 21% no opinion). These views are little changed from October 2012, when Ryan was running for vice president as Mitt Romney’s running mate. Opinions of Chuck Schumer also are mixed; Schumer is not as well-known as other congressional leaders (30% favorable, 34% unfavorable, 36% no opinion).

In contrast to congressional leaders, nearly all Americans have an opinion of Donald Trump. As reported on Feb. 16, 41% of the public has a favorable opinion of Trump, while 57% view him unfavorably. 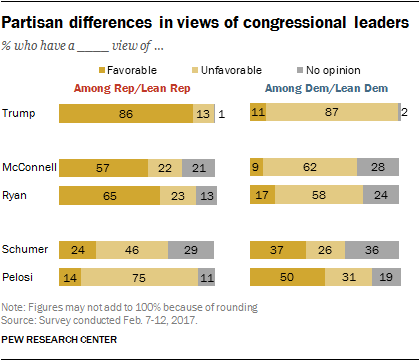 Partisans’ views of individual congressional leaders are deeply divided. Republicans and Republican leaners have much more favorable views of Senate Majority Leader Mitch McConnell and Speaker of the House Paul Ryan than do Democrats and Democratic leaners, and the reverse is true for Minority Leaders Chuck Schumer and Nancy Pelosi. 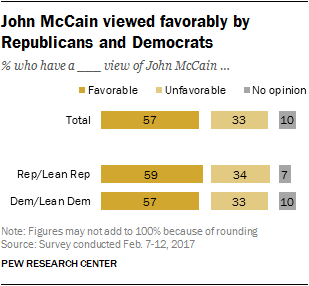 Schumer is not very well known, even among Democrats: 37% view him favorably, 26% unfavorably, while 36% have no opinion.

Opinions of McCain among Republicans are virtually unchanged from September 2013, when 56% of Republicans and Republican leaners viewed him favorably. However, favorable opinions of him among Democrats have increased 19 percentage points since then (38% then, 57% today).

Partisans’ views of how their parties should deal with Trump 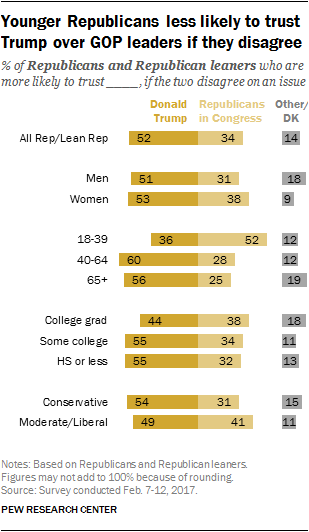 Democrats and Democratic leaners are much more concerned that their representatives in Congress will not do enough to oppose Donald Trump and his policies than they are that congressional Democrats will go too far in their opposition (72% vs. 20%).

There are modest differences in these views across subgroups of Democrats: Large majorities of liberal Democrats (77%) and conservative and moderate Democrats (68%) both say their bigger concern is that Democrats in Congress will not do enough to oppose Trump’s policies.

In Trump Era, What Partisans Want From Their Congressional Leaders
Survey ReportViews of congressional leadersPartisans’ views of how their parties should deal with Trump
Methodology