Overall, 39% say they approve of how Trump is handling his job as president, while 56% say they disapprove and 6% do not offer a view. Job ratings for Trump are more negative than for other recent presidents at similar points in their first terms. 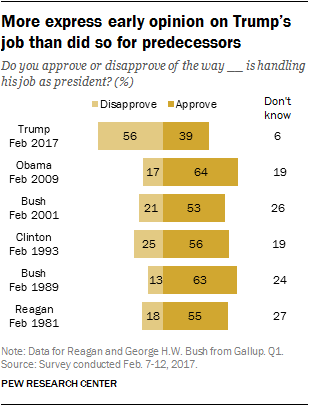 By margins of more than two-to-one, larger shares of the public approved than disapproved of the early performance of Ronald Reagan, George H.W. Bush, Bill Clinton, George W. Bush and Barack Obama. For example, in February 2001 – just a few months after Bush defeated Al Gore, despite narrowly losing the popular vote – 53% approved of how he was handling his job, compared with just 21% who said they disapproved.

An overwhelming share of the public (94%) offers a job rating for Trump; just 6% say they don’t know whether they approve or disapprove of him. By contrast, about two-in-ten or more declined to offer an early view of prior presidents dating back to Reagan in 1981.

The approval ratings of Trump’s recent predecessors followed different trajectories over the course of their first years, with a few improving in the eyes of the public, while others saw their ratings decline. 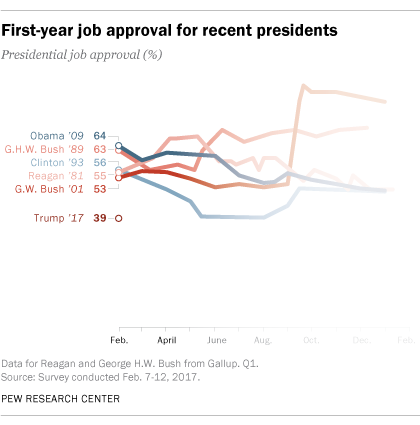 Clinton began his first term with an approval rating of 56%, but his ratings fell to around 40% by the summer of his first year, before recovering somewhat by the end of 1993.

Obama saw a gradual decline in his initially high approval ratings over his first year. By contrast, ratings for George H.W. Bush rose over the course of 1989. Ratings for Reagan initially moved higher, but then declined later in the year.

Approval ratings for George W. Bush were around 50% through the summer of his first year, but shot up to the mid-80s following the Sept. 11, 2001 terrorist attacks. 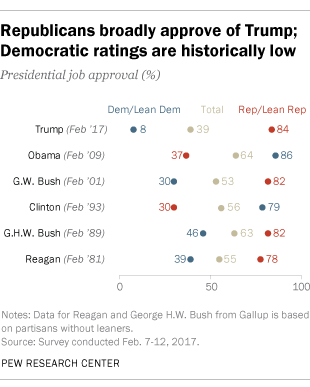 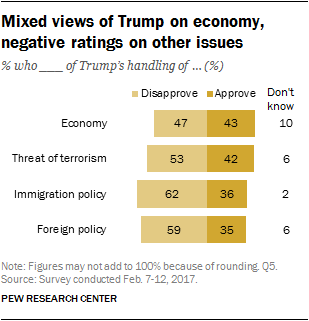 When it comes to specific issues, Trump receives negative ratings for his handling of terrorism, immigration and foreign policy; his ratings on the economy are more evenly split.

Views of Trump’s traits and characteristics

Most Americans see Trump as someone who keeps his promises and is able to get things done, but the public holds negative views across many other characteristics, including his trustworthiness and temperament. 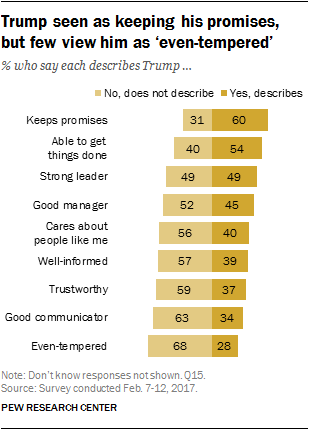 As many say Trump is a strong leader as say they don’t view him this way (49% each). When it comes to his management ability, 45% think he is a good manager, while 52% say this phrase does not describe him.

Trump’s image is much more negative across a range of other characteristics. Majorities say that Trump is not even tempered (68%), is not a good communicator (63%), is not trustworthy (59%), is not well-informed (57%) and does not care about “people like me” (56%).

Across most traits, large majorities of Republicans and Republican leaners ascribe positive characteristics to Trump, while relatively few Democrats and Democratic leaners do the same. 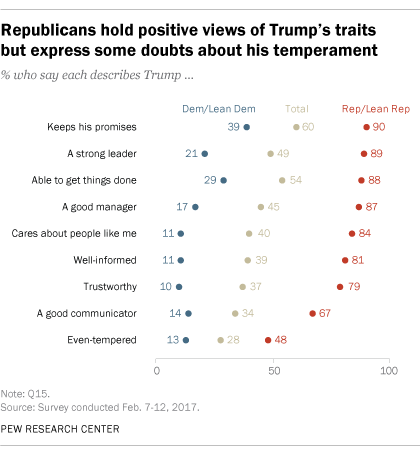 For example, 81% of Republicans say Trump is well-informed compared with just 11% of Democrats.

However, the partisan gap is slightly narrower on whether Trump keeps his promises, with 39% of Democrats saying he does so. 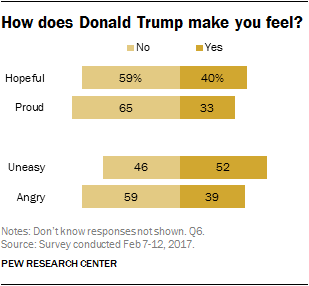 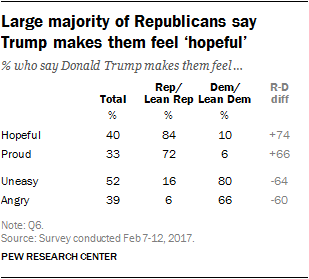 Concern about Trump and conflicts of interest

At the outset of his administration, the public is not confident that Trump keeps his business interests separate from the decisions he makes as president. 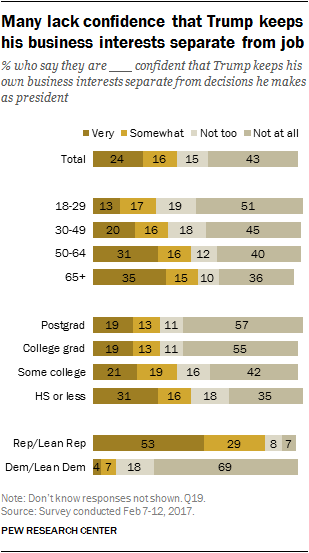 Young people and highly educated adults express particularly low confidence that Trump is keeping his business interests separate from his decision making as president. Overall, 51% of those ages 18-29 say they are not at all confident that he is doing this, compared with 45% of those 30-49, 40% of those 50-64 and 36% 0f those 65 and older.

How much respect does Trump have for democratic institutions?

Most Americans say Trump does not have much respect for the country’s democratic institutions. 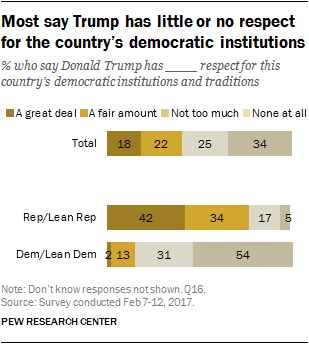 Overall, 59% say Trump has not too much (25%) or no respect at all (34%) for the country’s democratic institutions and traditions. A smaller share (40%) says he has either a great deal (18%) or a fair amount (22%) of respect for these institutions. Views on this question are little changed from October 2016, during the general election campaign.

As with virtually all assessments of Trump, there are wide party divides in views on this question. Among Republicans and Republican leaners, 77% say Trump has either a great deal (42%) or a fair amount (34%) of respect for the nation’s democratic institutions. By contrast, 85% of Democrats and Democratic leaners say Trump has little respect for democratic institutions and traditions in the U.S, including a majority (54%) of Democrats who say he has no respect at all for these institutions and traditions. 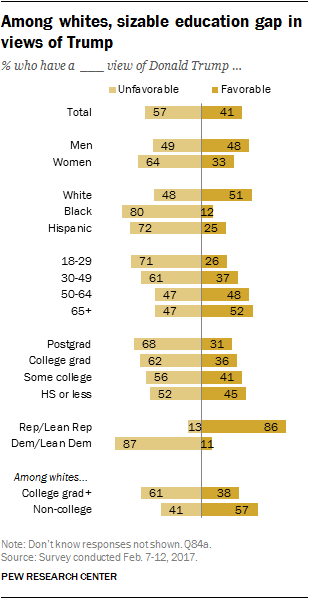 Views of the national economy are the most positive they have been since prior to the Great Recession. The more positive assessments of the economy are the result of improved views among Republicans in the wake of the 2016 election, and steady economic ratings among Democrats.

Looking ahead, 38% expect economic conditions to be better in a year, while nearly as many (32%) think they will be worse; 28% expect them to be about the same as they are now. Far more now expect economic conditions to change over the next year (either for better or worse) than said this prior to the election, as views among Republicans have grown more optimistic and views among Democrats have become more pessimistic. 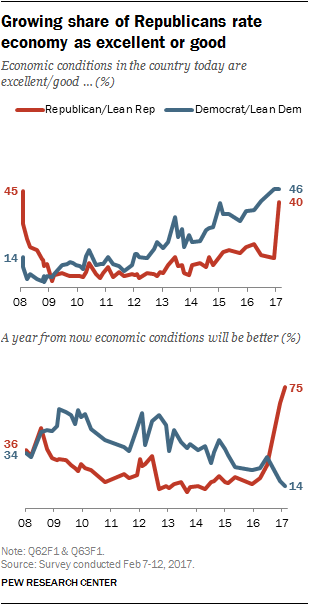 Since December, the share of Republicans who rate economic conditions as excellent or good has shot up from 18% to 40%. Looking forward, 75% of Republicans expect conditions to be better in a year; in June, just 27% said this.

In First Month, Views of Trump Are Already Strongly Felt, Deeply Polarized
1. Early public attitudes about Donald Trump
Views of Trump’s traits and characteristicsConcern about Trump and conflicts of interestHow much respect does Trump have for democratic institutions?Wide demographic differences in Trump favorability ratingsViews of national economic conditions
2. Views of Trump’s executive order on travel restrictions 3. Views of Islam and extremism in the U.S. and abroad 4. Attitudes toward increasing diversity in the U.S. Methodology