Public opinion about legalizing marijuana, while little changed in the past few years, has undergone a dramatic long-term shift. A new survey finds that 53% favor the legal use of marijuana, while 44% are opposed. As recently as 2006, just 32% supported marijuana legalization, while nearly twice as many (60%) were opposed.

Millennials (currently 18-34) have been in the forefront of this change: 68% favor legalizing marijuana use, by far the highest percentage of any age cohort. But across all generations –except for the Silent Generation (ages 70-87) – support for legalization has risen sharply over the past decade.

The latest national survey by the Pew Research Center, conducted March 25-29 among 1,500 adults, finds that supporters of legalizing the use of marijuana are far more likely than opponents to say they have changed their mind on this issue. 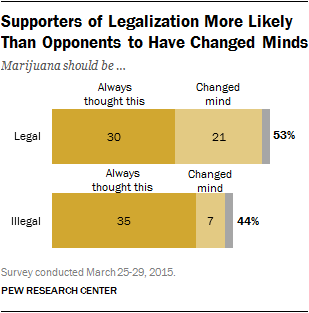 Among the public overall, 30% say they support legalizing marijuana use and have always felt that way, while 21% have changed their minds; they say there was a time when they thought it should be illegal. By contrast, 35% say they oppose legalization and have always felt that way; just 7% have changed their minds from supporting to opposing legalization.

When asked, in their own words, why they favor or oppose legalizing marijuana, people on opposite sides of the issue offer very different perspectives. But a common theme is the danger posed by marijuana: Supporters of legalization mention its perceived health benefits, or see it as no more dangerous than other drugs. To opponents, it is a dangerous drug, one that inflicts damage on people and society more generally. 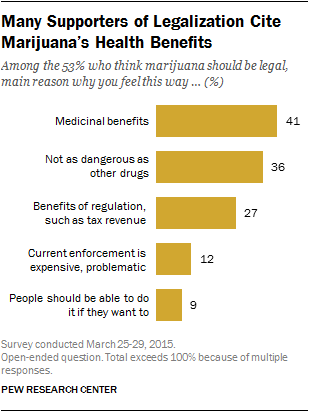 The most frequently cited reasons for supporting the legalization of marijuana are its medicinal benefits (41%) and the belief that marijuana is no worse than other drugs (36%) –with many explicitly mentioning that they think it is no more dangerous than alcohol or cigarettes.

With four states and Washington, D.C. having passed measures to permit the use of marijuana for personal use, 27% of supporters say legalization would lead to improved regulation of marijuana and increased tax revenues. About one-in-ten (12%) cite the costs and problems of enforcing marijuana laws or say simply that people should be free to use marijuana (9%).

Why Should Marijuana Be Legal? Voices of Supporters

Main reason you support legalizing use of marijuana…

“It is not as harmful as alcohol. […] It also helps medical conditions as a more natural substitute to pharmaceuticals.” Female, 46

“My grandson was diagnosed with epilepsy a year ago and it has been proven that it helps with the seizures.” Female, 69

“I think crime would be lower if they legalized marijuana. It would put the drug dealers out of business.” Female, 62

“Because people should be allowed to have control over their body and not have the government intervene in that.” Male, 18

“I think that we would have more control over it by allowing a federal agency to tax and regulate it like alcohol.” Male, 25 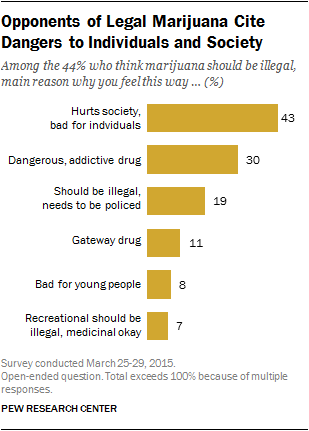 The most frequently mentioned reason why people oppose legalization is that marijuana generally hurts society and is bad for individuals (43% say this). And while many supporters of legalization say that marijuana is less dangerous than other drugs, 30% of opponents have the opposite view: They point to the dangers of marijuana, including the possibility of abuse and addiction.

About one-in-five opponents of legalization (19%) say marijuana is illegal and needs to be policed, 11% say it is a gateway to harder drugs and 8% say it is especially harmful to young people. A small share of opponents (7%) say that while the recreational use of marijuana should be illegal, they do not object to legalizing medical marijuana.1

Why Should Marijuana Be Illegal? Voices of Opponents

Main reason you oppose legalizing use of marijuana…

“It’s a drug and it has considerable side effects. It should not be used recreationally, only for medicinal use.” Female, 20

“It’s a drug that makes you stupid. It affects your judgment and motor skills and in the long term it makes you lazy.” Male, 52

“It gets too many people on drugs. It would put too many drugs on the street, we don’t need that.” Male, 84

“I’m thinking of my child. I don’t want her to try this. I know it’s not good for her health or brain.” Female, 33

“We have enough addictive things that are already legal. We don’t need another one.” Male, 42

The pattern of opinion about legalizing marijuana has changed little in recent years. Beyond the wide generation gap in support for legalization, there continue to be demographic and partisan differences.

Majorities of blacks (58%) and whites (55%) favor legalizing marijuana, compared with just 40% of Hispanics. Men (57% favor) continue to be more likely than women (49%) to support legalization.

Nearly six-in-ten Democrats (59%) favor legalizing the use of marijuana, as do 58% of independents. That compares with just 39% of Republicans.

Among Democrats, 75% of liberals say the use of marijuana should be legal compared with half (50%) of conservative and moderate Democrats. 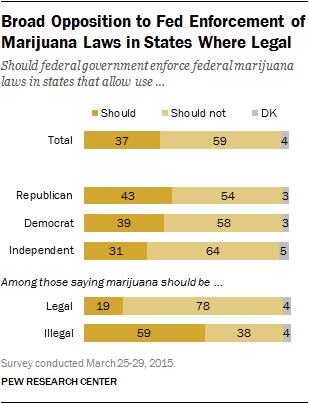 The new survey also finds that as some states have legalized marijuana – placing them at odds with the federal prohibition against marijuana – a majority of Americans (59%) say that the federal government should not enforce laws in states that allow marijuana use; 37% say that they should enforce these laws. Views on federal enforcement of marijuana laws are unchanged since the question was first asked two years ago.

In contrast to overall attitudes about the legal use of marijuana, there are only modest differences in views across partisan groups: 64% of independents, 58% of Democrats and 54% of Republicans say that the federal government should not enforce federal marijuana laws in states that allow its use.

Concerns About Marijuana Use 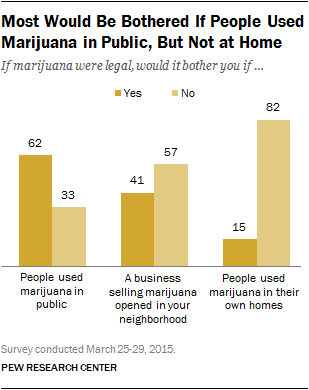 There is less concern about the possibility of a marijuana-related business opening legally in people’s own neighborhood: 57% say it would not bother them if a store or business selling marijuana opened legally in their neighborhood, while 41% say this would bother them.

And just 15% say they would be bothered if people used marijuana in their own homes; 82% say this would not bother them.

And while 77% of those who oppose legalizing marijuana say, if it were legal, they would be bothered if a store or business selling marijuana opened in their neighborhood, just 12% of supporters of legalization say this would bother them.

About Half Say They Have Tried Marijuana 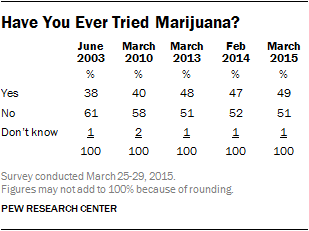 Among Democrats, liberals (58%) are more likely than conservatives and moderates (42%) to say they’ve tried marijuana.