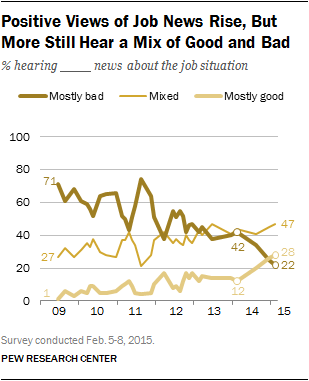 For the first time since the end of the recession in 2009, a greater share of the public is hearing mostly good news (28%) than bad news (22%) about the job situation. Nearly half (47%) say they are hearing a mix of good and bad news.

This marks a stark change from a year ago, when just 12% said they were hearing mostly good news about jobs, while more than three times as many (42%) had negative perceptions; 44% described the news as mixed.

Positive impressions about job news continue to tick up as the Labor Department reported the greatest three-month increase in new jobs since 1997. However, January’s unemployment rate of 5.7% sits at the same point as in October.

A new survey by the Pew Research Center, conducted Feb. 5-8 among 1,003 adults, shows that views of news about the overall economy also have become more positive, although a majority (62%) continues to describe the news as mixed. For the first time since the Pew Research Center began tracking this question in December 2008, about as many are hearing mostly good news (18%) as bad news (17%) about the economy. In previous surveys, negative views had consistently surpassed positive impressions. 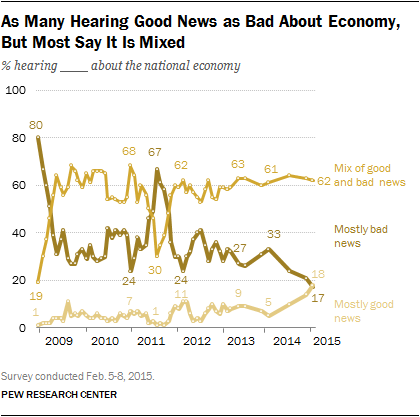 The average price of regular gas has risen about 15 cents in the last two weeks to $2.19 a gallon, though it is still more than $1 a gallon cheaper than it was a year ago, according to the U.S. Energy Information Administration. 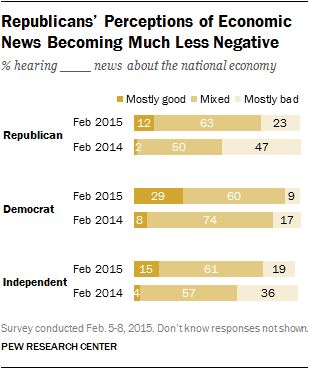 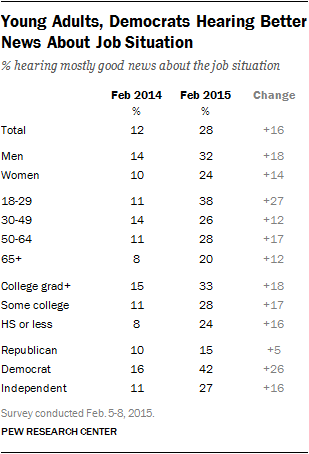 Most demographic groups also have more positive perceptions about the job situation compared with last February.

All age groups, especially young adults, register more positive perceptions about jobs. Among those younger than 30, 38% are hearing mostly good news and 21% mostly bad news. A year ago, four times as many young adults were hearing bad news than good news (44% vs. 11%).

While positive perceptions of news about gas prices have more than quadrupled in the past year (from 14% to 62%), views of news about other sectors – food and consumer prices, real estate values and the stock market – have shown less change. 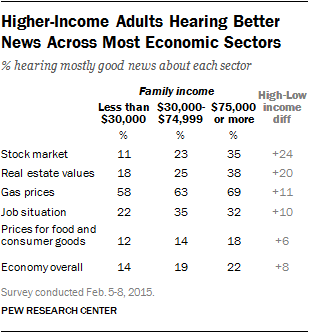 Perceptions of economic sectors continue to vary widely by family income. Regarding the stock market, those with annual incomes of at least $75,000 are hearing more good than bad news: 35% have positive perceptions, 8% negative and 53% mixed.

Among adults with less than $30,000 of annual family income, 11% are hearing positive news about the stock market, 9% negative and 53% mixed; a relatively large share of those with low family incomes (27%) express no opinion.