As the public grows more politically polarized, differences between conservatives and liberals extend their long reach even to opinions about which qualities are important to teach children, according to a survey by the Pew Research Center.

People who express consistently conservative political attitudes across a range of issues are more likely than other ideological groups to rate teaching religious faith as especially important – and the least likely to say the same about teaching tolerance.

These are among the key findings from a Pew Research Center survey conducted April 29-May 27 among 3,243 adults who are part of Pew Research’s new American Trends Panel, a nationally representative panel of randomly selected U.S. adults surveyed online and by mail. (Also see: A closer look at parents’ views.)

The survey asked about the importance of teaching 12 different qualities to children, from responsibility and hard work to manners, persistence, tolerance and faith. Respondents were then asked to choose the three traits that are most important.

Among the public generally, responsibility is viewed most widely as important to teach children: 93% say teaching children to be responsible is “especially important” and 55% rate this as among the most important – the highest of any of the traits and qualities tested.

Notably, there is agreement across the ideological spectrum regarding the importance of teaching many of these qualities: Responsibility ranks as the most important child-rearing value for every group – consistent conservatives, consistent liberals and those in between. Large majorities in all ideological groups also think it is important for children to learn independence, hard work and good manners.

Earlier this year, the Pew Research Center released a major analysis of changes in the American electorate titled Political Polarization in the American Public. The study, based on interviews with over 10,000 adults nationwide, tracked the growing ideological consistency and partisan antipathy expressed by Americans, and how these views correlate with people’s willingness to compromise, relations with friends and family, and even where they prefer to live.

In addition, roughly half of the survey respondents agreed to participate in follow-up surveys as part of an ongoing “panel.” This allows for further exploration of the American political landscape today, and the factors associated with political ideology. The data presented here are based on online and mail interviews among 3,243 panel respondents who were presented with a list of 12 different traits and asked to check all that are “especially important to teach children.” If more than three were selected, respondents were asked to choose the three that are the most important qualities to teach children.

There also are ideological differences over the importance of teaching children curiosity and creativity. About eight-in-ten consistent liberals (82%) prioritize teaching children curiosity, compared with no more than about six-in-ten in any other ideological group. Majorities across all groups say it is important teach creativity, though a higher share of consistent liberals (85%) than consistent conservatives (63%) views this is important.

The starkest ideological differences are over the importance of teaching religious faith. Among those who have consistently conservative attitudes across a range of political values, 81% think it is especially important for children to be taught religious faith, and 59% say it is one of the three most important of the 12 qualities included.

The relationship between ideology and opinions about the importance of teaching religious faith is partly, but not wholly, explained by the strong association between religious affiliation and ideological consistency. About four-in-ten (42%) consistent liberals are religiously unaffiliated, compared with just 6% of consistent conservatives. However, differences among ideological groups in these opinions hold even after controlling for religious affiliation and demographic factors.

The measure of ideological consistency used in this report is a scale composed of 10 questions covering a range of political values including attitudes about size and scope of government, the social safety net, immigration, homosexuality, business, the environment, foreign policy and racial discrimination. This scale is discussed in more detail in the Pew Research Center’s report on political polarization in the American public released earlier this year. Details on the scale can be found in that report’s appendix. 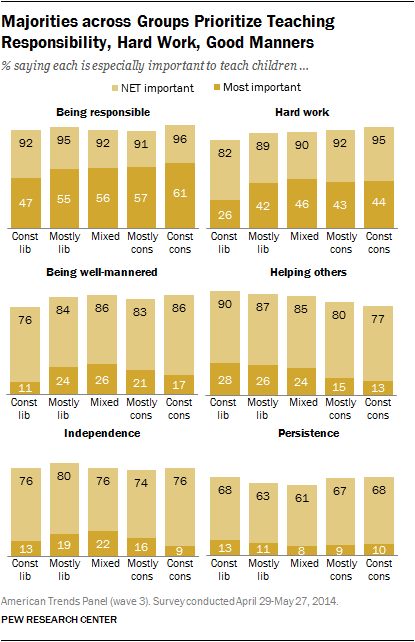 And helping others is seen as important by three-quarters or more in all groups. However, 90% of consistent liberals view this as important, compared with 77% of consistent conservatives. Independence and persistence are valued by about equal majorities across the ideological spectrum.

Ideological Divides on the Most Important Values to Teach Children 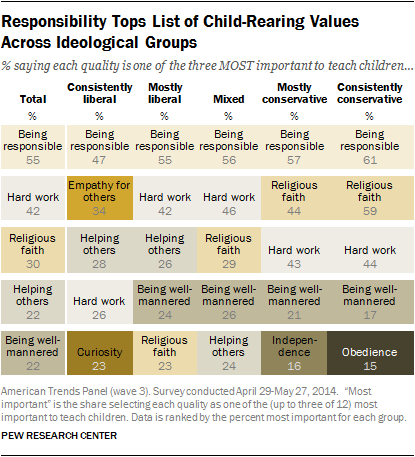 For consistent liberals, empathy for others ranks as the second most important value to pass along to children: 34% say this. Empathy ranks far lower (eighth or ninth) among other ideological groups (15% or fewer in each of these groups name it as one of the most important values). Similarly, helping others rates higher for those on the left of the political spectrum: 28% of consistent liberals, along with similar proportions of those who are mostly liberal (26%) or ideologically mixed (24%) say it is one of the most important values children should learn (compared with 15% or fewer of those in the two conservative groups).

Hard work is ranked in the top five among all ideological groups; it is named by four-in-ten or more of all groups except consistent liberals (26% of whom say it is one the most important values to instill).

Opinions about child-rearing vary by other characteristics as well, including gender, age, race, education, and religious affiliation. While the patterns across this set of 12 qualities are not always uniform, the differences by such background characteristics tend to be modest relative to those found on some half a dozen qualities among ideological consistency groups.

Men and women have similar value priorities for children for all but a handful of qualities. To the extent that there are differences, women are more inclined to prioritize helping others and empathy as important. A clear majority of women and men say that teaching children about helping others is important (89% and 80%, respectively for women and men) but women are relatively more inclined to say this. And 26% of women, compared with 18% of men, say it is one of the most important values to teach children.

Similarly, three-quarters of women (75%) say empathy is important and about two-in-ten (19%) consider it among the most important

qualities for children to learn. By comparison, a narrower majority of men (61%) say that teaching empathy is important and 11% consider empathy to be one of the most important qualities to teach children.

In keeping with other studies that find women demonstrating a higher level of religious commitment, women give teaching children religious faith a somewhat higher priority than do men (56% of women rate this as important vs. 50% of men).

Age gaps are evident on many of these values. Older adults are more inclined to prioritize teaching religious faith to the next generation, a pattern that is in keeping with the growth of the religiously unaffiliated among the younger generations. About two-thirds (65%) of those ages 65 and older say this is important to teach, and fully 41% regard it as one of the most important qualities to instill; by contrast, just 40% of those younger than 30 rate teaching religious faith as important and 17% name it as one of the most important qualities.

Older adults (65 and older) also are somewhat more likely to prioritize obedience (68% say this is important, compared with 56% of those younger than 30).

For instance, two-thirds (67%) of those who have not attended college say teaching obedience is especially important; that falls to just 47% among those with a college degree (and just 40% of the subset of this group with a post-graduate degree).

About seven-in-ten (69%) African Americans say it is especially important to teach children religious faith, with 41% ranking faith as one of the three most important values to teach. By contrast, about half of whites (51%) and Hispanics (54%) say teaching children religious faith is important, and just 30% of whites and 26% of Hispanics say it is among the most important values to teach children.

The greater importance blacks place on teaching children religious faith reflects the higher levels of religious practice and commitment among African Americans compared to the public as a whole.

Blacks are also somewhat more likely than whites to place importance on teaching children to be obedient—70% say this is important, compared with 57% of whites.

Blacks and Hispanics are somewhat less likely than whites to place curiosity or empathy on the list of important values to teach children: About half of blacks (51%) and Hispanics (48%) say curiosity is important, compared with 62% of whites. Most other values are seen as about equally important across racial and ethnic groups. 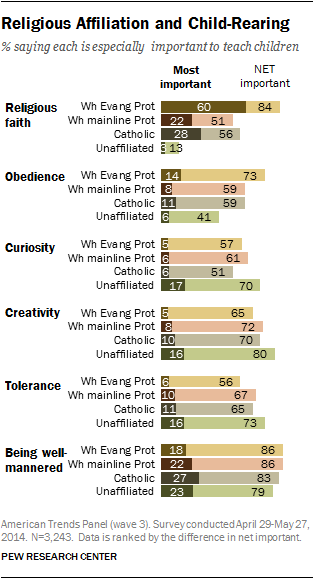 Though less stark, there are significant religious divides over the importance of teaching children some other key values. Those with religious affiliations—and particularly white Evangelical Protestants—are more likely than the religiously unaffiliated to prioritize obedience and being well-mannered, and somewhat less likely to say creativity, curiosity or tolerance is important.

On most other qualities, however, there are no or only modest differences between religious groups when it comes to values to instill in youth.