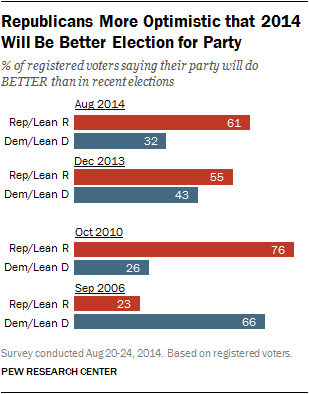 With just over two months before the midterm elections, Republican voters are widening the “expectations gap” with the Democrats. About six-in-ten (61%) Republican and GOP-leaning registered voters think their party will do better than in recent elections — roughly double the share of Democrats (32%) who feel similarly about their party’s chances.

This gap has not reached the same levels of the GOP’s margin before their large 2010 gains or the Democrats’ expectations in their 2006 sweep of both houses of Congress. Last December, the expectations gap was narrower; 55% of Republicans and Republican-leaning registered voters said the party would do better than recent elections, compared with 43% of Democrats.

A new national survey by the Pew Research Center and USA TODAY, conducted Aug. 20-24 among 1,501 adults (including 1,171 registered voters), finds that about half of voters (49%) have given “quite a lot” of thought to the upcoming elections. The amount of thought given to the elections at this point of the campaigns is in line with the attention given to past midterm elections. 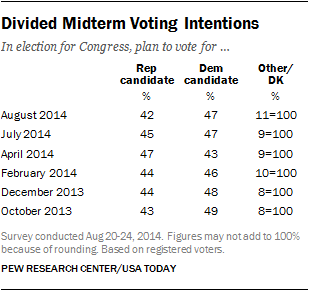 The public’s congressional vote preference remains fairly even. Among registered voters, 47% would vote for the Democratic candidate today or lean Democratic and 42% would vote or lean Republican (11% volunteer “other” or don’t know). In surveys going back to last October, neither party has opened up a large lead in the generic ballot. 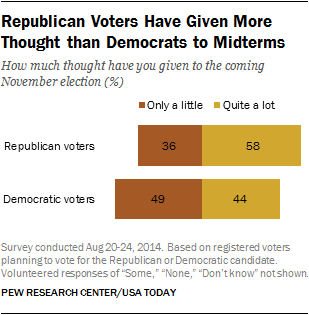 At about this point in the 2010 midterms, overall voter preferences also were closely divided. About as many Republicans voters said they had given quite a lot of thought to the election as say that today (58% now, 59% then). But Democratic voters are now more likely to say they have given a lot of thought to the midterm than did so in early August 2010 (44% now, 34% then).

A Pew Research Center report last month, which looked at other measures of voter engagement, also found that the GOP’s engagement advantage, while substantial, was not as wide as it was at a comparable point four years earlier.