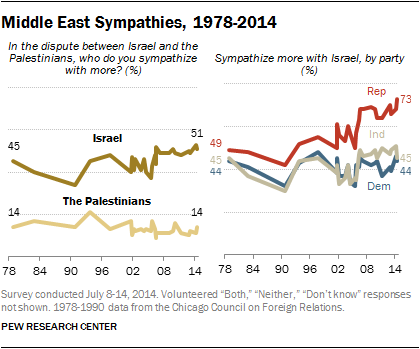 As violence between Israel and Hamas shows no signs of abating, the sympathies of the American public continue to lie with Israel rather than the Palestinians. And dating back to the late 1970s, the partisan gap in Mideast sympathies has never been wider.

These views are little changed from April, before the recent outbreak of Mideast violence. However, the share of Republicans who sympathize more with Israel has risen from 68% to 73%; 44% of Democrats express more sympathy for Israel than the Palestinians, which is largely unchanged from April (46%). The share of independents siding more with Israel than the Palestinians has slipped from 51% to 45%.

Just 17% of Democrats, 17% of independents and 6% of Republicans sympathize more with the Palestinians than Israel. These numbers have changed little since April. 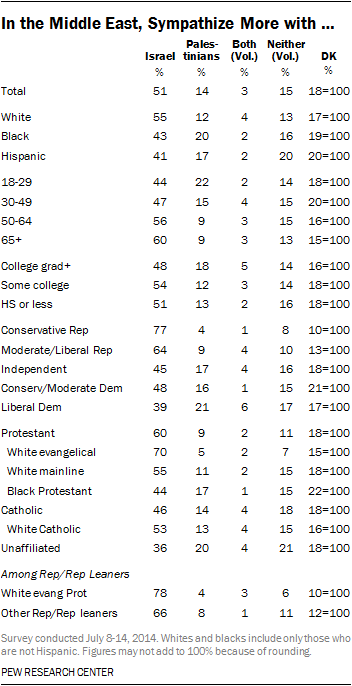 The new national survey by the Pew Research Center, conducted July 8-14 among 1,805 adults, finds substantial age differences in opinions about the dispute in the Middle East. Majorities of those 65 and older (60%) and 50-64 (56%) say they sympathize more with Israel, compared with fewer than half of those 30-49 (47%) and under 30 (44%). Those under 50 also are more likely than older Americans to sympathize more with the Palestinians.

Modest Backing For Israel in Gaza Crisis
Republicans and Democrats Grow Even Further Apart in Views of Israel, Palestinians
More Express Sympathy for Israel than the Palestinians
Public Remains Supportive of Israel, Wary of Iran
Public Says U.S. Does Not Have Responsibility to Act in Syria